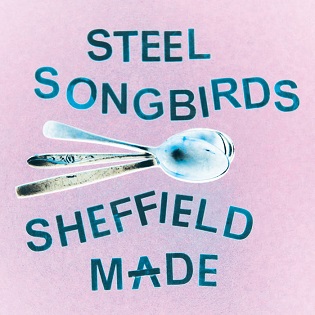 
Steel Songbirds are Emily Eastwood and Marilla Homes, a duo of anglo-Australian origin now based in Sheffield. The two young ladies met while working behind the bar at folk festivals (Shrewsbury, Bromyard, Warwick), then after moving to Sheffield independently in 2016 and singing in the city’s sessions, at first singly then very soon together, a vibrant musical partnership was quickly forged. They wrote their first song together in 2017, and that very song, Th’ Internet Dates, is (naturally) the lead track on Sheffield Made, their debut album.

Marilla and Emily are blessed with truly complementary voices that were just made to sing together, as you’ll hear straightaway on the aforementioned “starter for ten” – they could be sisters! Thus fittingly their debut CD delivers 13 prime examples of their vocal artistry, refreshingly unadorned by instrumentation and with no studio gimmickry. What you hear is what you get when you see them performing live, in other words – and the diverse spread of material accurately reflects their predilections and tastes as well as their original songwriting abilities. The CD’s menu features two songs jointly penned by Marilla and Emily, as well as three good examples of Marilla’s songwriting craft; the latter comprise the simple but hard-hitting I Stand Before You, the Australian-themed Settler’s Wife and – best of all – her 2017 entry for the John Birmingham Cup, Carry The Black Beast (a powerful portrayal of depression).

Alongside these originals sit some inspired choices of contemporary song, although I admit the highlights for me are those with a specific “local” connection – Alec Thompson’s wistful and proudly nostalgic homage to the City Of Steel which gives the CD its title; a stirring rendition of Chris While’s steel ballad Drop Hammer; and Bex Neale’s response to the final days of The Old Tinsley Pots. There’s also Piers & Gill Cawley’s affectionately persuasive protest opus Child Of the Library, a song which should guarantee Emily and Marilla plenty of “book-ings” (ha!); a well-turned account of Brian Bedford’s word-dancing classic Too Old To Care (as if!); and character studies by Sally Ironmonger/Brian Carter and John Thompson. Mention of the latter prompts me to remark that (IMHO) the Songbirds derive much of their inspiration from Cloudstreet (John and Nicole), as well as from the mighty Artisan and (on that dating number) Victoria Wood. Their enviably “laugh or cry, same price” versatility enables them to switch almost effortlessly between comedy and poignancy and with plenty of scope in between, with all the skill and vocal technique (and not a little delicious theatricality!) to match. And, as the CD’s final track demonstrates, it’s abundantly clear they have a real blast singing together – on their breathlessly breakneck account of that rattling old accumulative warhorse The Rattling Bog they can’t resist a suitably “copious amount of giggling” (once they’ve sacked the fiddler, that is, and got into their stride!)… That seven-minute showpiece aside, though, I’d voice my only (personal) reservation, that some (although ok, not all) of the comedy numbers arguably work best in the live-show context, and can pall with repetition (so I might sometimes be tempted to skip them on later plays unless I’m really in the right mood) – but then I could also say that it’s unfair to describe them as lightweight!

The digipack’s booklet helpfully contains the song lyrics (which despite the central cover image do not include any “spoon-erisms”!). But seriously though… Finally, all credit to Marilla and Emily’s producer Brian “The Brain” Bedford for so faithfully capturing the essence – and larger-than-life presence – of the Steel Songbirds: their rounded vocal quality, their assurance and sense of balance, and not least their impeccable natural sense of timing, honed even sharper no doubt by rehearsal. Here’s an act with bundles of personality, so steel yourselves for maximum impact!

PS – The album is available in splendiferous physical form, and also as digital download, from www.steelsongbirds.bandcamp.com