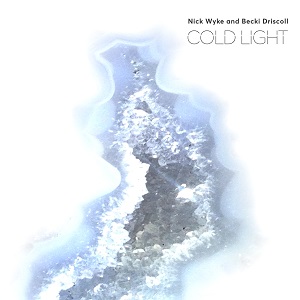 
West Country fiddle duo Nick Wyke and Becki Driscoll first became inspired to develop a more global approach to English folk music when busking their way through Spain and Portugal. It resulted in an instrumental album, 'The Calling', being released in 2006. Over the course of a further three albums, they have continued to weave their skills and musicianship into an innovative fabric, adding powerful vocals and stunning harmonies, and introducing horns, pipes and keys into the twist. 'Cold Light' is probably their most varied collection yet - a mixture of traditional and self-penned compositions, with influences drawn from Europe, Scandinavia and even South America.

'Cold Light' kicks off with 'The Knitting Reel', an instrumental celebration of grandmothers as well as anyone who knits. You can almost hear the needles clicking as Wyke's driving fiddle and Driscoll's interweaving melody lines are stitched together with James Budden's double bass and Keith Angel's percussion, as we knit one, purl one to the end of track one.

Nick Wyke's plaintive vocals strain to break free during the desperate 'Who's Crying Now?' Described as an exploration of the shackles of addiction, David Faulkner's English bagpipes and Ellen Driscoll's French horn simply and subtly add to an atmosphere of melancholy.

Traditional dance tunes 'Tie The Petticoat Tighter' and 'The Triumph' are given a fresh twist and serve to lighten the mood before Becki Driscoll turns her attention to contemporary issues, this time with 'Halo', reflecting on recent accounts of historic abuse where the powers of authority are silhouetted starkly against the vulnerability of victims.

'La Folia' illustrates perfectly just how closely the worlds of folk and classical music are intertwined. It is an intricate tune with Latin influences thrown in for good measure. Just the two fiddles on this one. Or are they, for just a few jazz-tinged minutes, violins?

'Riddles Wisely Expounded' does exactly what it says on the tin - inspired by questions and answers, it begins breathily but closes in a crescendo and a textured flourish of trumpets from Josh Westrip, and pipes from Faulkner.

'Three Bridges' paints a pastoral portrait of the Welsh countryside around Devil's Bridge, two fiddles twisting and turning to mimic the passage of rain water from the hills. 'Cold Light', the title track, captures perfectly the mood of a January morning before 'Winter' turns its gaze onto the power and the dangers of the sea.

'William Andrew's Hornpipes' return us joyfully to the traditions of English folk dance, ahead of the Bach-like rhythm of 'Systerpolska', a traditional tune which originated in Sweden. And, completing a triumvirate of musical dance forces, 'The Last Waltz of The Evening', complete with trumpet, French horn and flugelhorn, becomes Wyke and Driscoll's tribute to those lost or injured in two world wars. It also becomes a rallying call to find strength to carry on - a sentiment as relevant today as ever it has been.

'Cold Light' finishes as it begins - with a lively tune. 'Boscastle Breakdown' is one of those traditional hornpipes (this time of Irish origin) that absolutely demands to be enjoyed in a roomful of people. If you are listening to it at home, bang on your neighbours' doors and invite them round for a party. If you are listening in your car whilst stuck on the M25 use common sense and a safety-first approach. Either way, let your hair down and enjoy this one!

This collection showcases the extraordinary talents of Nick Wyke and Becki Driscoll. The intricate subtleties of their playing, the haunting vocal melodies and the incorporation of such a wide range of styles and influences make this an album to treasure, and to want to share with your friends. Wherever they might be.