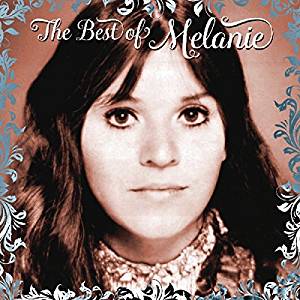 
It's a tricky affair reviewing a collection of songs written and released in a tight but golden, four-year period starting in 1968 - however, with Melanie's voice continuing to intrigue and enthrall in equal measure, this selection remains vibrant and, in some ways, extremely moving as it stirs the memories both musically and personally.

From her barest of whispers to roaring and strident outbursts she fills her songs with so many unexpected twists and turns. The tracks that are most bare and stark, such as the wondrous, showstopper, Leftover Wine, recorded live in 1970, with its towering vocals and thrilling guitar are worth listening to in any decade in any century.

All vulnerable and regretful, Garden In The City is an out-and-out gem, almost like a Christmas hymn in parts with New Yorker, Ms Safka lamenting: "heaven is so far I'll never touch the sky" as she lives in the city as opposed to her childhood in the country.

Jigsaw Puzzle bounces to an effortless rhythm and roll with breathtaking vocals, and what's going on the background is anyone's guess. There's a Tom Waits' like oompah-type intro to Look What They've Done To My Song Ma with Melanie in plaintiff overdrive and The Good Book manages to be warmly, gospel-tinged even with penny whistles curiously being allowed to join in.

Please Love Me, excessive instrumentation notwithstanding, is a gorgeous song with the lady, who went down a storm at dawn at Max Yasgur's farm in 1969, hitting on our emotions without mercy. What this song would sound like minus flutes makes me wonder. With the Edwin Hawkins Singers' chilling choral contribution on the epic Lay Down (Candles In the Wind), Melanie's wide-ranging artistic strengths converge. Buoyed by the massed voices, she sings as though her life depended on it. It's exhausting and beguiling.

Side-stepping the novelty songs such as Brand New Key, her covers are immense, tackling big tracks from big boys in a majestic way: Bob Dylan's "Lay Lady Lay" and the beast that is Ruby Tuesday by The Rolling Stones both make it on to this album and stand the test of time. Was it audacious to tackle these songs, or was it more a case of an intriguing singer/songwriter with the confidence to refuse to conform or settle into a specific category? Four of the tracks on this "Best Of" appear on Garden In The City, which has just been released for the first time on CD. Overall, this is a tantalising walk down memory lane with Melanie and the ceaseless wonders of a range of vocal styles that collude to captivate - as Joni Mitchell and Sandy Denny do - those who choose to listen.