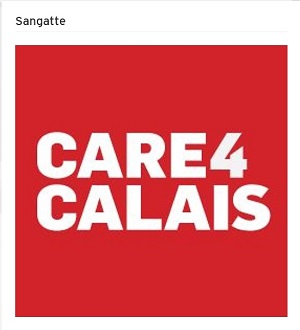 
The camps around Sangatte in France lead, inevitably, to strong opinions. Are the people there refugees fleeing war and destruction, or economic migrants looking to benefit from other people's prosperity? Whatever your view, if you put that to one side what you are left with is a simple story of human suffering. The people who have reached these camps, for what ever reason they set out, can amazingly be considered the lucky ones. On their route to France they have suffered deprivation and abuse. Many have fallen foul of the people smugglers who are no better than modern day slave traders and only interested in profit. Perhaps even more have perished in the deserts of North Africa or the seas of the Mediterranean.

In 2016 Minnie Birch spent some time volunteering in the camps with the charity Care4Calais and it was an experience which affected her deeply. There were probably many things she could have done with that experience, but she has chosen to write a song and it is a very fine song indeed. I would struggle to name anybody who could do it better.

As we know from her previous work, Minnie specialises in the individual at a very human level. Her delicate, almost frail, voice is perfectly suited to describing situations where people are not in control of their lives and are often not in a good place. As she says herself she sings sad songs that will mend a broken heart but there is never a sense of despair or capitulation in her work. Her characters will survive, they will endure.

Life in a camp must be stark and basic and she captures that sense superbly in this song. The music is a very stripped back guitar and the repetition within it suggests a situation where nothing changes from day to day. There are no weekends, no holidays, just the slowly revolving seasons.

Of course from such an accomplished songwriter, who already has two albums and various EPs to her name, the words are what really gives this song its power. It is not one that preaches or pretends to know an answer, instead it asks for no more than understanding for a fellow human being in a desperate situation.

"So lend them your heart, they do not need your shoes,
Their bare feet can walk on this land they don't choose."

For me the most poignant line in the song, and the one really emphasises the gap that exists says, quite simply,

"The people who are made here in mud and in stone, are equal to me until I choose to go home"

We, as much by luck as judgement, live in a society where we do have choices that are denied to so many around the world through religion, politics or culture. This songs asks us to remember those who are not so fortunate.

The production values on the recording are superb, as would be expected with the rising star who is Lauren Deakin-Davies as producer.

Sangatte is released as a charity single for Care4Calais on Monday 27th March and will be available across all major download platforms as well as Minnie's bandcamp page:
https://minniebirch.bandcamp.com/