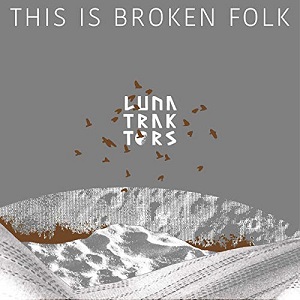 
Fancy some broken folk experiments? After experiencing some Sex Madness with Art Terry, Raphael Mann turns attention to production duties with the 'broken folk' duo of Carli Jefferson on harmonies and percussion and Clair Le Couteur as the predominant singing voice. For the record, the set sees dark and playful re-workings of traditional folk songs. Nothing particularly radical about that maybe, but combining the expected harmony singing with body percussion, tap dance and loops, you have a very different beast. As the band have intimated, it's what's left when everything (eveything) else is taken away. Folk music stripped back to raw elements in the way that the likes of Stick In The Wheel have made their forte.

So we have an album that might be subtitled 'Once upon a time there was folk music' as experimental folk music is taken one step further. In a word, stark, although in a sense very traditional in the way that folk music core values are about interpreting traditional song from Britain, Ireland and Australia. However, it's quite a different kettle of fish that the way Dylan respectfully treated 'Jim Jones' and 'Arthur McBride' on his 'Good As I Been To You' back in '92. In the hands of Carli and Clair, the former sees the voice almost transformed into a didgeridoo groan and our broken 'Arthur McBride' is accompanied by all manner of things being struck and hit in a percussive montage as the song is sung out in a most theatrical fashion.

A massive ten minutes to cover 'Ben Hall' that proves a brooding and intense listen that even sees the Aussie intonation giving the piece an element of authenticity. It's a mammoth undertaking and is reminiscent of Nick Cave and Tom Waits working their magic. Tales of robbery, poaching; a surfeit of references to penal colonies and the standard folk tales of betrayed lovers are all given innovative treatments. Not always an easy listen and first impressions might be of puzzlement and bemusement. However, with some time invested, this thing called broken folk is a quite extraordinary collection of songs.

This Is Broken Folk