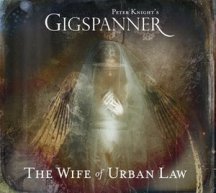 
It’s been a busy couple of years for Peter Knight’s Gigspanner. During their last winter tour, their percussionist Vincent Salzfaas had to pull out of the last dozen or so dates due to problems at home, and so the tour was finished with the aid of assistance from Gary Hammond (percussionist with The Hut People) and Sacha Trochet. Sacha has now joined Peter Knight and Roger Flack as their permanent percussionist.

“The Wife Of Urban Law”, Gigspanner’s latest album, sees the band back as a three piece again: Peter, Roger and Sacha - though the Big Band Line up still continues, with a Big Band Live album released last August, and the Big Band recently performing at Cropredy.

The title was inspired by an 1884 gravestone, of Elizabeth, ‘the beloved wife of Urban Law’. Urban Law, apparently, was a wheelwright in the Cotswold town of Chipping Norton. Having friends who ran a bed and breakfast at ‘The Forge’ in Churchill, the village next to Chipping Norton, makes me feel connected to Urban and Elizabeth. A wheelwright would almost certainly have visited that nearby forge.

The name Urban Law obviously appealed to Gigspanner, presumably because it sounds like City Rules and Regulations, but it was the emotional aspects of burying your beloved wife that has shaped the songs on this album.

Most of the songs here concern separation in one way or another, and usually it is the woman who suffers. Again, as with “Layers Of Ages”, their last studio album, the majority of the tracks are traditional, with a few self-penned songs.

The first track, “Urban’s Reel” is an instrumental credited to the whole band. It opens with a haunting guitar solo from Robert, so my instant reaction was that I must be listening to the wrong track – this was nothing like a reel. Then a wall of percussion crashes in from Sacha, again, nothing like any reel I’d encountered before. Finally Peter’s violin joins the mix and the tune begins to feel more like a reel, but still quite different from the traditional genre.

Other instrumentals on the album are an Irish hornpipe called “Blackbird” and Peter Knight’s own tune “Lament For The Wife Of Urban Law”. Outstanding musicianship on all.

The traditional “Spencer the Rover”, I guess, is the first of the songs about separation. It tells of a happily married man who one day decides to leave home and rove around the country. After many years he returns and his family welcome him back with open arms. Contrast this with the fifth track on the album, another traditional song, “Peggy and The Soldier”, which tells of a young married woman who leaves her family to run away to sea with a soldier, but after just a week she returns, (turns out the soldier was violent). Of course, the spurned husband wants nothing to do with her. Wives, it seems, are happy to accept husbands wandering off for years, but husbands won’t put up with it even for just a few days.

On the other hand, the final track on the album, “Rocking The Cradle” is sung from the point of view of a husband, whose wife spends every evening out on the town, leaving him at home looking after a child that isn’t his own. He isn’t happy, but at least nobody gets banished, or killed.

Strangely, the last album I reviewed for Fatea, Kim Lowings and the Greenwood’s “Wild And Wicked Youth”, included the traditional song “Bold Riley”, as does “The Wife Of Urban Law”. Again, a song of separation, through no fault of either party, as Riley is conscripted to sail to India to fight. The instrumental break on this track is stunning. Incidentally, there is another traditional folk song “John Riley”, which tells of the return of John Riley from war to marry his sweatheart. Would be nice to think that both songs refer to the same person.

My favourite track on this album is “Green Gravel”. Apparently it is based on a children’s circle game, though the theme is extraordinarily dark for a children’s game. The tune is recent though and was written by Fay Hield, from the a capella folk band The Witches Of Elsick. The song is about a woman called Annie. In the first round she is told her partner has fled, then she is told he has died, then she commits suicide. Both Flack and Knight have the ability to play their instruments so that when they play a sad note, the note cuts into your soul, like a knife. Love this song, but it is very emotional.

When I reviewed “Layers Of Ages”, I said that this band deserved to be reviewed in their own right without the need to refer back to the group where Peter Knight made his name. I promised that next time I reviewed anything by them I would make no mention of that group. However, they don’t make it easy for a reviewer. The track “Penny The Hero”, written by Peter, was previously released back in 1989 under a different title, “Seagull”, on the album “Tempted and Tried” by the band that I promised I wouldn’t name.

On the sleeve notes for “Tried and Tempted”, “Seagull” is described as being about the game Shove Penny. I knew the game as Shove Ha’penny, but I guess that is inflation. Most Fatea readers are probably too young to remember pre-decimal currency, but many years ago, the British money was called sterling and there were 240 pennies (abbreviated as “d”) in a pound (or 480 half pennies). Also, long ago, before most Fatea readers were born, pubs didn’t have huge TV screens displaying Sports channels to attract punters – they had various pub games such as skittles, darts and Shove Ha’penny (or Shove Penny). The game was played on a grid of squares, where you’d place a coin on the edge of the table, then strike it with the heel of your hand so the coin slid on to the grid. If it landed on a grid line it didn’t count, but if it landed within a square it counted as a point.

In a particular pub in Hastings that Peter used to visit, they’d chalk the score on a blackboard, and whenever someone managed to get three coins within one square it was called ‘three in a bed’ and the resultant ‘3’ that was chalked up was written on its side. The whole pub then cheered ‘seagull’, as a sideways 3 looked like a bird in flight.

Like the instrumental “Blackbird”, “Penny The Hero” was recorded live from the Flavel Arts Centre in Dartmouth.

Apologies as the attached video dates back from 2015 when Vincent Salzfaas was their percussionist and when “Penny The Hero” was called “Seagull”. Have not found any official youtube clips of the current line-up, or of the band playing any other tracks from the album.

The band is currently touring, and will be returning to the Ram Club in Thames Ditton, (where the attached video was filmed). Having listened to this beautiful, but heart wrenching album, I cannot wait to see them again.