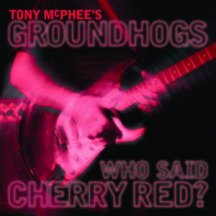 
I have had a very strange relationship with The Groundhogs throughout most of my life. As a young schoolboy, at one time I was quite keen on Blues Rock, and loved bands like Cream, Ten Years After and The Groundhogs.

My school, like most at the time, practised a thing called ‘assembly’ whereby, first thing in the morning the children were herded in the hall to have to sing hymns and recite prayers. One day, however, the Religious Education teacher announced he was going to do something different, and played a track from a vinyl LP on a record player – that track being “Thank Christ For The Bomb”, by the Groundhogs. The entire school instantly went off The Groundhogs, because if the establishment liked them, particularly if the RE teacher liked them, then it just wasn’t cool to be a fan.

Alan Freeman had a radio show on Radio 1, in which he would play album tracks not normally given coverage elsewhere on the airways, so whenever possible, I would sit by my transistor, armed with a cassette tape, a Binatone tape recorder, and a microphone. If Alan Freeman announced he was going to play something that sounded interesting, I would press record and pray that the rest of my family were quiet until the recording had finished. Almost every single band whose records I bought I encountered first from Alan Freeman.

So one particular Saturday, a few years later, when I’d forgotten that it wasn’t cool to like them, he introduced a track as “Cherry Red” by The Groundhogs. I recorded the track and absolutely adored it. I listened to it all the time, but somehow managed to forget who it was that was playing it.

Nowadays, you could simply type ‘who sang cherry red?’ in to Google, but pre-internet, it was not easy to find the answer to such questions, so for years I knew I loved “Cherry Red”, but didn’t know who the artist was.

In 1976, they played at my University, so I finally got to see them live. Eureka! They played “Cherry Red”, so I finally knew who it was that had played it. Except that after a few years, with the stresses of finals, starting work and just general day to day living, I managed to forget again. Still loved the song, and knew that I had known who it was, and knew that I’d seen them – just couldn’t remember which of the many bands that I’d seen over the years it was.

Finally, years later, whilst browsing through HMV, I came across a Groundhogs CD, ‘Split’. Read the cover notes and saw it had “Cherry Red” on it, and so finally bought it.

The whole concept behind “Who Said Cherry Red”, is that most of their fans also adore this track. Whenever The Groundhogs play live, someone in the audience would always cry out for that track to be played, along with other major favourites such as “Garden” or “Split” and so these tracks were always played. As a result, many of the bands other material rarely ever got to be performed live, so in 1996, Tony McPhee, decided to produce a live album comprising solely their rarer material.

Tony McPhee is basically the heart of The Groundhogs. He was the founder member, wrote the material, played guitar and, until recently, was the vocalist. The line up has often changed, (usually a trio), but Tony has always remained the constant. So much so, that there are rumours that this album, described as being ‘live from a secret location’, is actually a solo performance, recorded in Tony’s basement, with the crowd cheering dubbed on afterwards. Evidence to support that comes from the fact that the bassist, Pete Chymon and the drummer, Dale Iviss have never appeared in any other line up of the band, and the name Pete Chymon is an anagram of Tony McPhee.

Whatever the truth, the sleeve notes still state that this is a live album, and Wikipedia still records the line up as valid.

There are five tracks on this ‘live’ album, but each track comprises several songs, run from one to the other without a pause for introduction or applause, so, in fact, there are actually 15 songs played here. Each track comprises the lesser known works from a particular album, tracing through the history of the band.

Track 1 merges three songs, “Rocking Chair”, “Man Trouble”, and “Married Men” from their first album, ‘Scratching The Surface’, originally released in 1968. The second track has three songs, “BDD”, “Times” and “Natchez Burning” from their 1969 album, ‘Blues Obituary’. The third track has songs tracks, “Status People”, “Rich Man, Poor Man” and “Darkness Is No Friend” from their 1970 album ‘Thank Christ For The Bomb’. The fourth track comprises two songs, “Junkman” and “A Year In The Life” from their 1971 album ‘Split’, and the fifth and final track blends four songs, “Sad Is The Hunter”, “You Had A Lesson”, “Earth Shanty” and “Mr Hooker Sir John” from the 1972 album ‘Hogwash’.

Keen eyed fans may notice that the chronological order does skip an album. In 1972, they also released a second album: ‘Who Will Save The World? The Mighty Groundhogs’. The lack of any tracks from that is because the album was released to meet a contractual date, and is not one of Tony’s favourites.

Not clear whether The Groundhogs will ever play again. They have disbanded a few times in the past. Tony had a stroke in 2009, and as a result the trio became a foursome in 2011 when they were joined by Joanna Deacon on vocals, but they haven’t played together since 2014, though Tony does still play, so I'd guess a reunion is always possible.

This Talking Elephant release is a re-release as the album was originally brought out on the Indigo label back in 1996. It is full of absolutely brilliant blues tracks, all at least as good as anything Cream ever did. I must add though, that even though this is an album filled to the brim with marvellous blues rocks, in my opinion, and probably in every Groundhog fan’s opinion, almost certainly including Tony McPhee, none of these tracks are quite as stunning as “Cherry Red”. If you haven’t ever yet listened to The Groundhogs I’d recommend their album ‘Split’ as a good first album. If you are already a Groundhog fan, and didn’t managed to bag a copy of this back in 1996, then it’s a must.