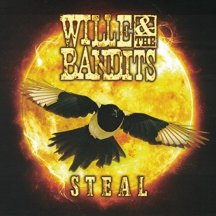 
I was lucky enough to see Wille And The Bandits play at Cropredy in 2016. I think that many people think of Cropredy as being primarily a folk music based festival, but the variety of different musical genres represented there was vast. Trio Wille Edwards, Matt Brooks and Andrew Naumann, performing as Wille And The Bandits, are quite a hard rocking blues band, but because of their brilliant musicianship they were extremely well received by the predominantly folk-loving audience.

The other thing that was remarkable about Cropredy was the huge variety of different instruments. From Brighde Chaimbeul's bagbipes to Gryphon's Crumhorn, the list of instruments that weren't played there was probably a shorter list than those that were. Three of the instruments that I didn't even knew existed before were used by Wille and The Bandits.

Most bass guitars you'll come across have four strings, but occasionally you might see a bassist playing a five string bass. Matt Brooks plays a bass with six strings! Not only that, he also plays a double bass, but a bass like no other I've ever seen – a five stringed double! Both of these amazing instruments are made by Far West, and they enable Matt to take the lead in an instrumental break and play complex, intricate tunes of the sort that you expect from a lead guitarist.

Wille, as well as being the main vocalist, plays a variety of electric and acoustic guitars (including a dobro), but also plays an electric lap steel guitar, and an acoustic lap steel guitar (known as a Weissenborn). I used to not be much of a fan of a steel guitar, believing that its main role was to make a whiney noise during moaning parts of country and western tracks, but changed my mind when I saw Melvin Duffy play with Dave Cousins from the Strawbs. Wille uses the lap steels in a quite different way again, like a blues guitarist playing slide.

“Steal” is their fourth album, and their first since being signed by Jig-Saw. I have three theories as to why the album is called “Steal” as there is no track on the album with that name. Possibly because they are called ‘bandits' and bandits are known for stealing. Possibly because ‘steal' sounds like ‘steel' and the lap steel features heavily in their music. I think, though, that as several of the tracks are about how we are misusing the Earth's resources, it is called “Steal” because we are stealing the planet from future generations.

As a trio, there will obviously be parallels drawn between them and Cream, and Wille is definitely a guitarist on a par with Clapton, but they have parallels, in my opinion, with Deep Purple, Led Zeppelin, Rolling Stones and Peter Green's Fleetwood Mac. The attached video is one of the few tracks they played at Cropredy not penned by them, but sadly no others from that gig seemed to have been posted on youtube.

Although there are just three of them they still make as full a sound as a five piece rock band. A typical band might have a rhythm guitarist who bashes out chords, a bassist who plays the same notes as the chords and a drummer who pumps out the same basic rhythm as the bassist, with a lead guitars and a vocalist let loose to provide the tune. With a six string bass capable of providing the tune or the beat, and a percussionist rather than a drummer, the Bandits' sound could easily be mistaken as coming from a much larger band.

Highlights on this album are many. The first track “Miles Away” at first hearing sounds like a good driving song (it is – the whole album is brilliant music to cruise along a motorway too). The lyrics: ‘…we've come so far … but we've still got miles to go' definitely sounded to me, when I first heard it, to be about driving, but listen more carefully and it's a song protesting about racism. It is the human race that still has miles to go.

Haven't managed to work out what “Hot Rocks” is about, but it has a killer guitar riff. Something very much along the lines of Richie Blackmore's riff from Deep Purple's “Smoke On The Water”.

I can't decide whether “Scared Of The Sun” or “Atonement” is my favourite track. “Scared Of The Sun” is a true rock anthem about global warming, and “Atonement” feels like it should have been impossible to write. All the musicians seem to be playing to entirely different beats, resulting in a complex, rhythm that is brilliantly hypnotic.

“Crossfire Memories” again is anthemic and is a song about refugees, sung from the point of view of someone fleeing violence and tyranny. Sadly, it seems even more relevant in the last few days since America has tightened its borders.

Don't know about you, but when I listen to old Deep Purple, Led Zeppelin and so on it makes me feel young again. There's something about this album that induces the same feeling of youth in me even though this is all new material. Not sure whether that is the style of music, the writing, or the recording technique. Apparently, in the studio, this was recorded completely using analogue techniques without recourse to any digital equipment. Maybe that's why listening to it is like sampling the elixir of youth. The effect is definitely intentional. Their song “1970” is a dedication to the era of ‘the good times'. It includes the line, ‘And the legends' voices fade away, their words still ring true today'.

I was really impressed that on three of the tracks they are joined on keyboards by the legend, Don Airey. Don took over as Deep Purple's keyboard player after the death of Jon Lord, but before that he has played with many a great band, including Black Sabbath, Jethro Tull, Rainbow, Judas Priest, Whitesnake and even Strawbs. He first started in 1971 with Cosy Powell's Hammer, so just missed out on 1970.

I feel that the fact that Don Airey agreed to play with them is confirmation that Wille and the Bandits are a truly great rock band. Since 1970 so many legends' voices have faded away, but Don Airey has passed the baton on to a new generation of rock heroes. To misquote the duc d'Uzes when the French king Charles VI died and was succeeded by Charles VII: ‘Le rock est mort, vive le rock'.