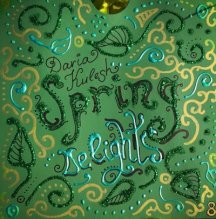 
It was through Daria Kulesh's band Kara that I first heard the song "Carnforth Station". Their cover of Jennifer Crook's song led me to follow Jen's "The Year She Turns" project, in which throughout 2016 she wrote a song a month about that month resulting in an album released at the end of the year. Without a Jennifer Crook track to look forward to each month 2017 looked bleak, but the void was filled by Joshua Burnell, with a similar, perhaps even more arduous project, in which he recorded a cover of a folk song each week, throughout the year, with thirteen songs arranged in four seasons, each season illustrated with a painting by Annie Haslem, the vocalist from Renaissance. Again, at the end of 2017, after Joshua released his "Songs From The Seasons" album, 2018 could have been bleak.

But Daria came to the rescue with her "Earthly Delights" project. To fund her next CD, which will be called "Earthly Delights", she is releasing a handmade EP each season throughout 2018. The first of these offerings, "Winter Delights" was released in March, and "Spring Delights" is hot off the press.

I think it is quite rare in these days of advertising hype for any product to actually live up to the promise on the label, but both "Winter Delights" and "Spring Delights" truly are delights. Amongst them are covers, traditional songs, traditional Russian songs, and a Daria original. "Winter Delights" contained four tracks and to understand two of them you'll need a quick Russian lesson. The Russian word Moroz, means Frost. The Russian equivalent to Father Xmas is known as Ded Morox (Father Frost). Ded Moroz predates Christianity, and has origins in a Slavic snow demon called Morozko (more of him later). The first track on "Winter Delights" is a traditional Russian song "Oy Moroz, Moroz", and you now know enough Russian to know what the song is about. A man is riding home on his horse through the ice and frost, praying he gets home before the cold kills him. He seems to be more concerned about getting his horse stabled than he is in getting to see his wife. Daria was accompanied on piano on "Oy Moroz, Moroz" by Marina Osman, a member of her band The Daria Kulesh Quartet.

The second track on "Winter Delights" is a Daria original, and like several of her compositions, is based on a story from an Ivan Bilibin illustrated book of Russian Fairy Tales that she grew up with as a child. Like "Vasilisa", her recent single, "Morozko" is a story about a young girl with a wicked step mother. Do hope this track ends up on "Earthly Delights" when it is released. I am still singing 'Are you cold, my maiden fair?' to myself even on the hotest days.

"Winter Delights" also includes a lovely cover of Nick Drake's "Northern Sky", and finishes with the most beautiful version of Sandy Denny's "Who Knows Where The Time Goes?" that I have ever heard - and when I say that, I do include the original! And just in case you don't understand the enormity of that statement, I think Sandy Denny was one of the world's best singers.

Canadian Loreena McKennitt's sixth studio album, "The Book Of Secrets" contained a haunting song called "Night Ride Across The Caucasus" which could be the reason that Daria is a fan, as Daria's last album "Long Lost Home" relates to Ingushetia, the country of her ancestors which lies in the Caucasus mountains. Apparently, "The Mummer's Dance", also on "The Book Of Secrets", is one of Daria's favourite songs. The second EP in this delightful series opens with Daria's cover of "The Mummer's Dance", a perfect spring time song, particularly as Daria has overlaid bird song at the start and end. The original is almost orchestrated, with a vast range of instruments, including, I think, a dulcimer, an oud, a double bass and a violin. Daria's version is more simplified (the main instrument is Jonny Dyer's guitar), but the version is no less lovely.

The second track is another homage to Spring, sung in the original Russian language and accompanied by Marina Osman on keyboards. "When Gardens Bloom", unlike "Oy Moroz, Moroz", is not a traditional Russian song, but is a cover of Anna Gardner's song. Daria describes Anna as Poland's equivalent to Eva Cassidy. The chorus, in English, is something along the lines of:
Only once a year the gardens bloom.
The spring of love we expect once in a life time.
Only once in a life time the gardens of our souls bloom.
Only once, only once.

Before coming to the UK Daria once had a residency in an Irish pub next door to the Kremlin in Moscow. As a result, she grew up listening and playing to many old traditional folk songs such as "She Moved Through The Fair", and "Down By The Salley Gardens". I guess almost everyone has covered "Down By The Salley Gardens" at one time (including Loreena McKennitt). Up to now, my favourite version was by Clannad, as, like Sandy Denny, I think Moya Brennan has one of the most beautiful voices ever. Have to say, though, that every time I listen to Daria's version tears well in my eyes, and that has never happened to me listening to any other version. I can't put my finger on what it is about this song that makes me so emotional. The easy answer would be that it was Daria's wonderful voice, (which is probably a factor), but I think it could also be Tristam Seume's guitar playing. Somehow, he seems to be able to play each note with such depth and passion that I think I'd be an emotional wreck if this was just an instrumental.

Last year Daria had a couple of gigs at the Troubadour in London, not quite a residency, but the next best thing. To celebrate she performed a couple of covers of some of the artists who had played there in the past, including Dylan and Sandy Denny. As well as "Who Knows Where The Time Goes" she also covered another song that Sandy Denny (amongst others) played, "The Quiet Joys Of Brotherhood" and that too is included pn "Spring Delights". The lyrics were written by Richard Fariña who married Joan Baez's sister Mimi and was killed in a motorcycle accident at the age of just 29. Think this is my favourite track on the EP, though it is almost impossible to chose as they are all so brilliant. Quiet Joys always struck me as more of an Autumn themed song rather than Spring, though it does talk about the oak and weeds rising from the ground, which are definitely signs of new growth and therefore spring like, but the line about man coming to plough the fields has more of an Autumn ring to me. Daria is accompanied by the multi-instrumentalist Jonny Dyer on acoustic guitar, but half way through the haunting wail of Daria's Shruti box joins in to give a really ethereal quality to the track. Stunning.

The Quiet Joys Of Brotheerhood