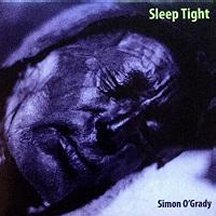 
In these days of Brexit and Trump we all need a gentle breeze of fresh air to blow away the cobwebs from our stressed lives. From the first notes of "Sleep Tight" you'll know that this EP from Simon O'Grady is the gentle breeze to do it. "Sleep Tight" is such a good name for the EP as Simon's soft voice feels like a lullaby.

I know Simon from his previous group, Grand Union, a jazz/folk band that I think were sensational. Happy to say that two members from Grand Union, Gerry Wood (drums) and Julian Marshall (Mandolin) have joined Simon on this, his first solo project.

Back in 1967, when the Stones released "Let's Spend The Night Together", the world was shocked at the implied depravity in the song. Simon's, "The Sun Wakes The New Horizon" takes a similar theme - stay with me 'til morning, but there is nothing shocking about this. It's an invitation to spend the night, safe, warm and secure, with your head resting on his shoulder until the sun wakes the new horizon. The song is so gentle and relaxing that I think anyone receiving an invitation like that would suddenly realise that dawn was breaking before they'd even had a chance to think.

The second track on the album, "Your Eyes Turn Up" sounded very familiar to me, but I couldn't quite place it at first. Grand Union produced an EP (called "Jane Jane"), and an album, ("Through The Green Fuse"), but this track, does not appear on either. However, they were writing new material and playing new tracks all the time, so I think that "Your Eyes Turn Up" began life as an unrecorded Grand Union song, "Over The River". Both songs begin with the same lyrics, and are about travelling through a forest. "Over The River", I believe was about travelling alone, with every step bringing you nearer home and 'closer to you'. On "Your Eyes Turn Up", the journey isn't a solo one. There is someone with you, and their eyes are welling up with tears. When you hold their hand, you realise that it doesn't matter where you are travelling, or where you are going. As long as you are holding the hand of the one you love, you are home.

I don't know whether "The Coming Of The Snow" is just a simple song about the onset of winter, or whether there's any political overtones about it. If feels to me like the song could actually be about Brexit. The coming of the snow could represent the coming of hard times post the UK witdhdrawal from Europe. Even so, it's a positive song. The snow may be coming, but it will be followed by dreams of endless summer, and we will face the winter with our heads held high, singing.

"New Year Shoes" is a heartbreaker of a song about the trauma of the death of a loved one. When anyone asks how you are feeling you present a happy face and say that you are doing fine, but of course you aren't. People also try and offer encouragement by suggesting that the person you've lost will be looking down on you. If you don't believe in an after life, that doesn't help. When you are gone, you are gone.

As well as Gerry and Julian, Simon, who sings, plays guitar and the flute, is joined by Hannah Cope on bass and backing vocals, Ed Hopwood on harmonica, and Ed Gallagher on Dobro. A beautiful EP, though I'm not so sure about the cover art. It is a photograph of the Tollund Man, a naturally mummified corpse, from the 4th Century BC, preserved in a bog in Denmark.That implies a different meaning to the title "Sleep Tight". Rather than this being a lullaby it could be an elegy for the deceased. I would prefer to think of it as a gentle relaxing lullaby, designed to soothe all of your cares away. Sleep tight, sweet dreams.