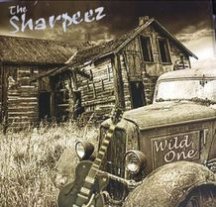 
Have to confess that it is a while since I saw the Sharpeez. In fact, it was so long ago that they were called The Sharpees, back then, and bassist Baz Payne's business card listed his Myspace address. The namechange happened because they discovered that there was a Chicago soul band also called The Sharpees, so they changed the "S" to a "Z" and became The Sharpeez.

The band dates back to the late seventies, when they were called Rebel, and I suspect that the album title, "Wild One" is a deliberate echo back to their earlier name.

They describe their music as Rhythm 'n' Blues, which is a term that has evolved greatly over the years, and is almost meaningless now, as it encompasses soul, hip hop, electronica and funk, none of which represents The Sharpeez. To distinguish their brand of R & B from that of Whitney Houston, or Mariah Carey, their website describes themselves as Maximum Rhythm and Blues, which was a term used on a series of posters in 1964 when the Who had a residency at the Marquee. I think, if asked, I would simply describe them as hard rock.

I encountered The Sharpeez via Brian Willoughby, which might surprise anyone who knows Brian from folk rock/ prog rock band Strawbs, or from the folk duo, Craig and Willoughby. Yes Brian is a brilliant folk guitarist, however, although I have no idea how many times I have seen Brian and Cathryn play, I am sure I have seen Brian playing Blues more often than I have seen him playing folk.

Although he has now moved to Ireland, Brian used to live quite near to me, and used to run an open mic night with another amazing guitarist from New Zealand, known as Scratch. The open mic night attracted some amazing talent, usually in the form of solo artists or singers who wanted the opportunity to play with other musicians, but occassionally an entire band, such as The Sharpees would pitch up and perform. Several times after that, if their slide guitarist, Loz Netto, was unable to make a gig, they'd call on Brian to stand in. I believe they have also called on Richard Hayes (from Bad Influence) and Roger Cotton (from Peter Green's Splinter Group) at other times.

They have a fairly fluid line up, with bass sometimes played by Baz Payne, and sometimes by Michael Steed, and drums sometimes played by Brendan O'Neill, from Rory Gallagher's band, sometimes by David Tettmar and previously by Spencer Blackledge. It is Loz, Baz and Brendan who join Bill on "Wild One". The main constant though is singer, and guitarist Bill Mead. Bill also writes most of the band's material. Six of the tracks on "Wild One" are credited to Bill, and the remaining three were written by Bill in conjunction with others.

The album also features Teresa Revill on backing vocals. Not having seen them play live now for a while, I don't know whether Teresa appeared just on the studio album, or whether she is a new band member. I hope so, beacause female backing vocals on hard rock is fairly rare, and sets this band apart from the rest.

These days, I generally tend to listen to prog or folk, and rarely listen to this genre. Listening to this, I realise that that is a bit of a shame, as this album is such glorious fun. It is so reminiscent of my youth and the rock I used to listen to all the time, particularly Deep Purple. The first track on the album, "Automatic Mode" is very much an homage to Purple's "Highway Star". It's meant for listening to with the volume up to eleven, whilst hammering down the fast lane.

So those of you who have never heard of The Sharpeez, or of Bill Mead, may be quite surprised that you already know one of the songs on this album. I suspect that most readers of Fatea will own a copy of Brian Willoughby and Cathryn Craig's album "In America". There's a track on that called "Bullet", written by them in conjunction with Bill. The track appears here, far more rocked up than on "In America", so if you know the song and want to hear a harder rock version, "Wild One" is for you.

Another collaboration on this album is with a local hero from this area, Pete Feenstra. Pete runs several music clubs including The Boom Boom Club in Sutton and The Beaverwood Club in Chislehurst. Bill and Pete wrote "Desperate Man", which has a definite Middle America feel, about someone trying to reach the border to escape both the law, and several spurned lovers in hot pursuit. It is no surprise that in February, there will be two album release concerts, one at the Beaverwood, and one at the Boom Boom.

This is their fifth studio album, and from the sleeve notes, it's the one they are most proud of. Three of the tracks on this album, apparently are re-recordings of tracks they have previously released including my favourite track on the album "Stilletto Heels". "Stilletto Heels", to me sounds very much like the sort of track that Wishbone Ash might have written in their rockier moments.

There's so much energy on some of these tracks, that I feel that "Dr. Feelgood" and "Losing Hand" would not be out of place on a punk rock album. All very much in keeping with the 1970's rock feel of the album.

So to summarise, a glorious, high energy, fun, rocking album, that covers, in my opinion, various genres all with a 1970's feel. I still don't think I'd really describe any of it as R&B, but maybe the term has evolved yet again.