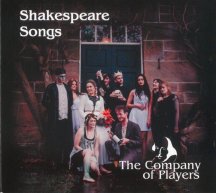 
The year is 1616, and Merrie England lies under the rule of the House of Stuart. James the first, the current incumbent, makes Ben Jonson poet laureate. Nicolaus Copernicus’s work “De revolutionibus orbium coelestium” is placed on the list of forbidden books by the Roman Catholic Church and Galileo Galilei is sent to Pope Paul V to explain his defence of Copernicus and the concept that the Earth orbits the sun. Matoaka, now known as Rebecca Rolfe, perhaps better known as Pocahontas, arrives in England, and Sir Walter Raleigh is released from the Tower of London, where he has been held imprisoned for treason.

And on April 23rd, just short of three years since a cannon had been fired as a sound effect during a staging of his play ‘Henry VIII’, accidentally burning the Globe Theatre in Southwark to the ground, William Shakespeare passed away.

Jess Distill from Said The Maiden, to celebrate that 2016 was the 400th anniversary of the death of Shakespeare, had the bright idea of teaming up with some of the her favourite folk musicians to write songs relating to the bard. Along with Kathy Pilkington and Hannah Elizabeth, her Said The Maiden bandmates, and Minnie Birch, Sam Kelly, Lukas Drinkwater, Daria Kulesh, Chris Cleverley, Kelly Oliver and Kim Lowings, they booked a week in a house in Derbyshire to write Shakespearean themed songs together.

They could, perhaps, have just added music to certain passages from some of Shakespeare’s plays, just added music to Shakespeare’s sonnets, just written songs inspired by his plays or just written songs inspired by his life, but with ten different singer/ songwriters they produced a wide variety of different themes, including one song inspired by a 19th century Russian work, itself inspired by a Shakespearean character. But don’t worry. You do not have to be a Shakespeare buff, or to need a degree in English Literature, or, indeed, to have any pretence of culture to appreciate this album.

The variety of voices, harmonies, instruments, and themes is vast, and the album is truly exceptional. Amongst the list of instruments played is guitar (electric and acoustic), violin, double bass, piano, dulcimer, banjo, clarinet, flute, mandolin, Shruti box and harmonica. Oh, and Hannah even plays the Spoons.

If you are aware of Said The Maiden, the style of the first song on the album, “Black Spirits” will probably be quite familiar to you. Although they are multi-instrumentalists, Jess, Hannah and Kathy are renowned for their a capella harmonies. Kathy, working on the principle that there were three witches in ‘Macbeth’ and three maidens in Said The Maiden, took sections of the speeches of the witches, mainly from Act IV Scene 1, and wrote a tune to fit. Mainly just vocals from Jess, Hannah and Kathy, with Sam, Chris, Kelly and Minnie joining in later, and with percussion from Sam.

“Up And Down – by Minnie Birch and “The Song Of The Philomel” by Kim Lowings are both inspired by ‘Midsummer Night’s Dream’. “Up and Down” is based on the wedding guests watching the play within the play, ‘Pyrimus and Thisbe’, and “The Song Of The Philomel” is sung from the point of view of Titania, suspicious that Oberon is trying to play tricks on her, so she asks the fairies to watch over her whilst she sleeps. Kim says that when she was asked to take part in the project she really had to swat up on her Shakespeare and that she should have paid more attention at school. Both songs exude the spirit of magic from the play.

“Gather Round”, also by Kim, is inspired by ‘The Tempest’, a play I haven’t ever read. The song is about how things aren’t always how they first appear. Really must read ‘The Tempest’ as it has spawned such a lovely song.

Chris Cleverley wrote two songs for the project: “But Thinking Makes It So” and “Fortune Forbids”. I absolutely adore them both, but sadly the latter didn’t make its way on the album. Not sure if that’s because he wrote it after they recorded the album (they recorded it back in January this year, and I saw them live in April), or whether they are saving it for a second album (Act II?). “But Thinking Makes It So”, isn’t inspired by any specific play, or sonnet, but based on Shakespeare’s thoughts on those who suffer from a variety of different mental conditions.

Jess wrote the lyrics to “Method In The Madness”, based on ‘Hamlet. She wanted it to be a little eerie, a little bit morbid, but couldn’t quite work out a tune, so she discussed it with Kim, and by the time she’d finished breakfast, Kim had turned it in to a hoedown. Superb toe tapper, even if it didn’t end up eerier, or morbid.

Fans of Daria Kulesh’s band Kara will already know “Lady Macbeth of Mtsensk” as it appeared in another ‘guise on Kara’s recent album Some Other Shore under the title “Goodbye and Forgive Me”. With Kate Rouse’s hammered dulcimer, the Kara version of the song is very pretty, but this version, with Lukas Drinkwater’s double bass, is dark and foreboding. It is based on Nikolai Leskov’s 19th century novel “Lady Macbeth of the Mtsensk District”, apparently crossed with a bit of a Shostakovich opera. Interestingly, on the CD sleeve there are ten tracks on the CD, but the CD itself believes that there are eleven tracks, because the first sixty seconds or so of this has been classified as a track in its own right, called “Interval”. Whether it is the introduction to Lady Macbeth, or a separate stand-alone piece, it certainly adds to the atmosphere of Daria’s contribution.

“You Must Needs Be Strangers” is a duet between Kelly Oliver and Sam Kelly, written by Kelly (Oliver) with the words of the verses taken directly from Shakespeare’s play ‘Sir Thomas More’, the only surviving copy of any play written in Shakespeare’s own hand. Kelly was awarded Best Female Artist in 2016, by Fatea. Her voice and Sam’s blend together beautifully.

“It Was A Lover And His Lass” was originally written by Thomas Morley, a contemporary of Shakespeare who included the lyrics in ‘As You Like It’. Hannah Elizabeth took the words and wrapped her own tune round them. When I saw her introduce it, she invited the audience to sing along to the nonsense words in the song, so I don’t know if she was pretending to be innocent or whether she didn’t actually realise that, in fact, the lyrics are just plain filthy. ‘Hey nonino’ is a derivative of the old slang word ‘nonny’, which was a euphemism in the 17th century for a certain part of the female anatomy – if you thought that Shakespeare was highbrow culture you may have to think again.

Jessica is a character from ‘The Merchant Of Venice’, the daughter of Shylock, and the final track on the album is “Jessica’s Sonnet”. The lyrics were written by the mother of Sam Kelly’s flatmate. Apparently when she heard this recorded version of the song, she cried – though not, of course, because she hated the song, but because she thought it was so beautiful! Another duet, this time Sam singing with, well on the album it says Chris, but fairly sure in reality it was Kim. Shakespeare, apparently, invented the name Jessica, solely for the play, so Jessica Distill, the brains behind this project owes her very name to the bard.

The album is officially released on the 26th January 2018, though can be pre-ordered from their facebook page. Next live event is in St Albans at the Maltings Arts Theatre, on the 23rd and 24th of May.

It Was A Lover And His Lass