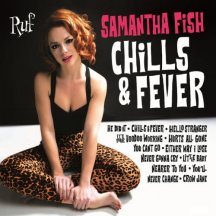 
I must confess to not yet owning any of Samantha’s records, or of having ever seen her play live before. She is American, but has played in the UK several times before, and I’ve often thought that I ought to go and see her, but somehow I’ve never quite managed it. Have watched her on youtube many a time, because she is an amazingly good blues singer and an amazingly good blues guitarist. Rare to find one person who does both so well.

So I was looking forward to reviewing Chills And Fever.

Have to confess though that I put the CD on in my car as I drove to work, and my first reaction was that I didn’t like the album at all. Then I listened to it again in the evening driving down the M23, and realised that I did in fact love it. Either the album wasn’t quite what I was expecting, or this type of music is better suited to evenings rather than mornings. Probably a bit of both.

The album definitely wasn’t what I was expecting. For a start, the majority of the songs on the album aren’t quite what I would classify as blues, and secondly, there isn’t a lot of guitar featured on these tracks. Most of the tracks on the album are only about three minutes long, which means that there is little time for an instrumental break. Samantha is accompanied by quite a few musicians, including Bob Mervak on keyboards, Marc Levron on trumpet and Travis Blotsky on saxophone, so not every instrumental break features the guitar.

But basically, musicians who find a formula that works and then carry on regurgitating the same old thing year after year can be a little dull, so I think Samantha needs to be admired for re-inventing herself. And as well as being a brilliant guitarist, she shines as a vocalist, and this album is a showcase for her vocals. She sings gently, raucously, emotionally, and really puts her heart into it without once over-souling.

Yes, there is some really good blues here, but there’s also a bit of soul, jazz, rockabilly, R&B, Motown and rock.

All of the tracks on this album are covers, but only one of them I’d heard before.

The first track on the album I just didn’t get at all when I first heard it. I now like it a lot, but I must confess that I still don’t quite understand this genre. It is a glorious, upbeat rocking foot tapper of a song, but it is about being mistreated by your partner. “He Did It”, written by Jackie De Shannon and Sharon Sheeley was originally a hit for the Ronettes back in 1965. I still feel that a song about an unpleasant relationship ought to be a bit more mournful, but I can’t deny that it is a good little rocker of a number.

The title track, “Chills & Fever” could have been penned by Imelda May, but was written by Rackep and Ross and was a hit for Ronnie Love in 1961. It really feels and sounds like I’ve heard Imelda play this before, but I’m pretty certain that she has never covered it. Unlike “It’s Your Voodoo working”, which was included on Imelda’s album “Love Tattoo”. Samantha’s version is more of a jazz version than Imelda’s, and has a lovely sleazy feel to it. The original track, by Charles Sheffield, was only one minute and forty nine seconds long, again originally released back in 1961.

My favourite track on the album, “Either Way I Lose” is more or less what I’d anticipated that the whole of this album would be. Pure blues, coloured by a beautiful guitar break. It’s one of those songs that has apparently been covered by very many people, including Nina Simone, though somehow I’ve never managed to hear it before. A much longer track, coming in at five and a half minutes, which, in my opinion, is just about long enough for a good blues song. Played on her signature Fender telecaster with a fish symbol emblazoned on the body.

Another close contender to being a favourite is “Cow Jane”. A much older track, first recorded in 1927 by Julius Daniels, (credited as the writer on the album), though it appears it is possible that the song is even older. A much shorter track but still time for Samantha to demonstrate her slide guitar capability, played on a cigar box guitar.

The album ends with another upbeat jazzy number “I’ll Come Running Over” credited to Bert Berns. According to ‘godsjukebox.com’ it was co-written by Bert Berns and Ilene Berns, his wife. Bert was an executive producer at Bang Records, who sadly died in 1967. Ilene carried on Bert’s work after his death, eventually selling Bang Records to Columbia. She died in February of this year, age 73. No idea whether she was aware that her song had been honoured in this way.

To summarise: you will love this album, whether you are new to Samantha Fish, or whether you are already a fan. The album may not be quite what you were expecting, but it is well worth a second listen if at first her change in style comes as a bit of a surprise.