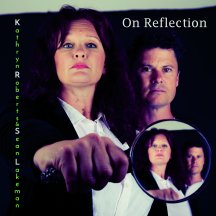 
A question that is often asked is, "If you had a time machine, what would you go back and see? The crucifiction? The assassination of Kennedy? Woodstock? Or some other major event in human history?".

Me, I would definitely go and see Equation play live. I saw a fair bit of live music whilst at school, but for years afterwards University, work and family took over, and it wasn't till my son left to go to University that I was able to start seeing live bands again. I missed out on decades of music, which means that not only did I never get to see Equation, I didn't even know of their existance till recently.

Kathryn Roberts and Kate Rusby, both from Barnsley started off as a duo. Then, twenty-five years ago, they teamed up with not just one, not just two, but three Lakeman brothers, Sean, Sam and Seth, and began touring as Equation. Kate eventually left to go solo, and was replaced by Cara Dillon. What absolutely stunning line-ups. A definite must see for any time traveller who missed out seeing them in the ten or so years that they performed.

To celebrate the fact that they've been making music together for twenty five years now since those early Equation days, husband and wife, Sean and Kathryn went through all of their back catalogue to select the tracks for "On Reflection". The album includes selections from Equation albums, from their first few albums as a duo, right up to two songs previously unreleased. There are traditional songs mixed with their own compositions. All songs were reworked and re-recorded for this album, and the resultant selection are all exceptionally beautiful.

As you would expect from any decent folk songs, there's a high body count amongst most of these tracks, and most of the rest feature loneliness, separation, false lovers and conscripted sailors. There is one really humourous track though. More on that later.

I am really excited about the first track, "Mother And Child". It is a sad song about a young woman with a child, kicked out of her home by her parents, and abandonded by her unfaithful lover. Having researched the song, I've found that it is generally better known as "It Was In The Month Of January", and is Roud 175. Kathryn and Sean first recorded it with Equation on their 1999 album, "The Lucky Few". Not a song I knew of, though it is an old traditional song from Ireland, but I did recognise a verse! Cecil Sharp had a theory that American folk songs had roots from the UK and Ireland, so in 1918 he set off to the Appalachian mountains and recorded as many folk songs as he could. One such song he recorded on the 14th August 1918 was sung by Jake Sowder, the Great Grandfather of Cathryn Craig (from Cathryn Craig and Brian Willoughby). Cathryn and Brian, along with Mary Hopkin recorded the song as "The Rejected Lover" on their album "Calling All Angels", and Joan Baez recorded it as "I Once New A Pretty Girl"

The "Rejected Lover" and "Mother And Child" are quite different songs, but "Mother And Child" contains the verse.
Come all you pretty fair young girls, a warning take by me
And never try to build your nest at the top of any a high tree;
For the leaves they will all wither and the branches will decay
And the beauties of a false young man will all soon fade away.

Whereas "The Rejected Lover" ends with:
So come all you fair lovers and a warning take from me
Never place your affections on a green-growing tree
For the leaves they will wither and the roots they will decay
And the beauty of a young girl will soon fade away.

Another Equation track included in "On Reflection" is "The Golden Bird", introduced to the band by Cara Dillon, who, according to Sean, shares a love with Katheryn for macabre songs. This is a night-visiting song. A woman returns to her lover, who says that they must never be parted, but she explains that she must leave before morning. Rather than simply stating that she was a ghost, she explains that she now has creepy crawlies for maids. Sean's guitar is phenomenal on this track. Almost unbelievable that he could get such deep bass notes from an acoustic.

Delighted to report that the collection also includes reworked versions of two other Equation tracks: "Sailor Boy", from "The Dark Ages", released back in 2001, and "Cry Wolf" from "First Name terms" from 2002. Superb vocal harmonies on "Cry Wolf", presumably multi-tracked in the studio, to emulate Cara's voice on the original.

In addition to the Equation tracks, they have also reworked "Lovely Nancy" from their first album (which was simply called "1"), "The Willow Tree" from their second album (simply called "2"), "Oxford N.Y." from their album "Hidden People" and "52 Hertz"from "Tomorrow Will Follow Today", along with two new tracks. "52 Hertz", for those that don't know the track, is about a whale whose voice has been detected under the ocean, but unlike other whale sounds, these sounds are never responded to by another whale. The whale is calling out for company, but the sound is never recognised, as the cries are not in the normal key. To emphasise the sadness, they've slowed it down, to make it a real tear-jerker.

"Oxford N.Y" is a track they wrote after visiting Oxford in New York, and discovering that in the grounds of a church there is a grave of a boy who had been buried in a glass coffin because he was afraid of the dark. The song is written from the point of view of the boy, pleading with his mother that when he dies not to bury him where he can't see the sun. It reminds me a bit of Steeleye Span's version of "Little Sir Hugh", (which was a murder ballad in which the victim, buried in non-consecrated ground, pleads with his mother to be buried properly).

Really difficult to decide which of the songs that they've revisited is my favourite. I don't own any Equation records, or Kathryn and Sean's first album, so I adore all of those tracks, but I think my preference is "The Willow Tree". A mass murderer, having already drowned six girls, has trapped his potential seventh victim, and coldly and chillingly discusses her upcoming death with her. Due to her skill and cunning, she not only manages to escape, but manages to drown him. So beautifully played and sung, it is really tense. A truly exciting song.

"Gryla", one of the two previously unreleased songs on this album follows a theme current in several of their songs. Mythological creatures who scare the wits out of children. "Huldra" was, I believe, the first, written when their twin girls were only about five years old, and tells of Norse spirits who live in the woods and prey on children. The moral - don't go into the woods! "Rusalka" was written when their girls were eight. They were obsessed with Disney's Little Mermaid at the time, so "Rusalka" was written to show the girls that not all mermaids are good. They later said it backfired, as the girl's were so scared they couldn't sleep. Rusalka, are Slavic myths - the spirits of wronged women, who seek vengence on men, made famous by a poem written by Alexander Pushkin.

Their girls are older now, so less likely to be scared of "Gryla", but probably still enjoy a scarey myth. Gryla is an Icelandic witch, mother of countless unruly children known as "Yule Lads". Like Father Xmas, she keeps a list of human children and whether they've been naughty or nice. Gryla will then sneak into naughty children's bedrooms to capture them to make a stew to feed her boys.

I love "The Cows Of Mystery", and have done since I saw them perform it live a year ago, so I'm overjoyed that it has been recorded. This is no murder ballad, or tragedy like many of the other songs on this album. It is a hilarious, light hearted romp in the style of Tom Lehrer, that Kathryn wrote so the family could sing it in the car on long journeys. There is a field near to where they live in Dorset, often populated with cows. Most of us will probably have noticed the phenomenon, one minute the field is empty, you glance away, and suddenly there are cows there. No sign of the cows moving - they are nonchantly standing there chewing the cud, looking completely innocent of any skullduggery. When you next look, the cows are no longer there! You never see them move, they just appear and disapper at will.

Kathryn has solved the mystery. We may dream of building time machines, but cows mastered quantuum physics long ago, and can travel to where they want and to when they want. If they wished, they have the technology to go back in time to witness Equation perform.

And then I realized - so do I. If I wish to hear Equation play, I have "On Reflection", a collection of frozen moments in time to be accessed whenever I want. Excuse me. I have some time travelling to do.

The Cows Of Mystery