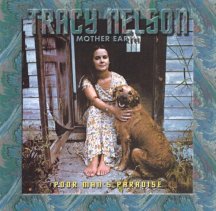 Also slightly strange as Tracy Nelson’s website (www.tracy.nelson.com) no longer exists but was archived back in 2013. Tracy Nelson still has a facebook page though, which does appear to be maintained by her, so I’m not sure quite why the website seems to have fallen by the wayside.

Her first album was released back in 1964, and Poor Man’s Paradise was first released, on vinyl, back in 1973. Mother Earth was the name given to her band, between 1966 and 1973 – a fairly loose collective of musicians, of which around twenty of them appeared on this album, playing a variety of instruments such as piano, keyboards, slide guitar, guitar, bass, percussion, trumpet, trombone, and alto, tenor, baritone and bass horns.

Tracy started life in Chicago as Blues singer, influenced by Howlin’ Wolf, Muddy Water and Otis Spann. She moved to San Francisco in 1966 where she shared bills with Grateful Dead, Jefferson Airplane, Joplin and Hendrix. In the late 1960’s she moved to Nashville, and her material became more influenced by Country.

Although she is a singer songwriter, (her song "Down So Long" was covered by Etta James and Linda Ronstadt), the tracks on Poor Man’s Paradise are all covers, and comprise a rich mixture of blues, country and pop. Her voice, at times, sounds almost identical to Carole King’s, particularly when she is accompanying herself on piano.

On the day of the vinyl’s release, back in 1973, Columbia records introduced a management cull, clearing out several managers and their acts, which included Tracy. Thus, the album was not ever really promoted.

By 2001, all of her material had been released on vinyl apart from this one. Finally, in 2001, the album was re-released by Arcadia, but all copies of that seem to have been sold, and currently Amazon claim to have three available at the bargain price of a mere £438.20! I imagine that some of that price includes postage! I would also imagine that there’s a fair chance that some of those are promotional albums from the upcoming August release from Floating World. (Still got my copy, so not guilty, but happy to know that at least for a month I possess an album worth £438.20.)

So if you’re a big fan of Tracy’s and missed out on the 2001 release, a fan of the blues, a fan of 1970’s Nashville country, a fan of Carole King’s, or just fancy owning a record that was on sale at over £400, give Amazon a miss and wait till August. Then this record will be a must have.