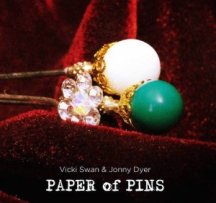 
Feeling very guilty as "Paper Of Pins" is Vicki Swan and Jonny Dyer's seventh album, and I still haven't bought any of them. I can't even claim ignorance as I saw them perform live back in January 2015, and they provided backing on Hector Gilchrist's last album which I reviewed on Fatea. Not only that, but I have recently watched the webcast of Jonny providing backing to Daria Kulesh as support to Kara's recent album launch. No. I have no excuses for not buying any of their albums, and the situation needs to be rapidly rectified.

When I was young, I used to wonder why you needed to have so many violins in an orchestra. They all play the same thing, so why not chuck out most of them, and just turn the volume up on the one remaining? It was explained to me that two violins sound different to one violin at twice the volume, as they will all have slightly different harmonics and timbre, so you get more of a spread out spectrum of notes which gives you a much fuller sound. Many years later, at an open mic night, I noticed an unoccupied drum kit. It sat there making a dreadful racket, as the wires on the snare drum vibrated along with the pressure wave that was generated by the loud speakers. I had a brainwave. Maybe I could design a multi-stringed violin that worked in the same way as that snare drum. The musician would play the usual four strings with a bow, but the remaining strings would resonate with the vibrations, to produce a full orchestral sound. A simple matter of designing it and my fortune would be made!

Of course, not only does such an instrument already exist, it was invented back in the 14th century! The nyckelhrpa (nyckel = keyed and harpa = fiddle), has four strings played with a bow like a normal violin, and twelve "sympathetic" strings that resonate. Unlike a violin it has a fret board, with a complex arrangement of keys that change the frequency of the notes. The nyckelharpa is a Swedish instrument, and had all but died out by 1950. It is Vicki's signature instrument, but not, by any means the strangest of the instruments that they play.

On this album Vicki is credited with vocals, nyckleharpa, oktavharpa, Scottish smallpipes, Swedish bagpipes, English border pipes, flute, whistle and double bass. Jonny is credited with vocals, guitars, gandola, bouzouki, accordions, piano, spinet, pipe organ, harmonium and cowhorn. What on earth is a gandola? What on earth is an oktavharpa? Not only have they dedicated their lives to playing these strange instruments. They have dedicated their lives to promoting these instruments in any way that they can. The discography on their website is more of a bibliography. Amongst the list of their albums there are many music books they have written including Vicki's "Scottish Smallpipe Tutor Book" and her "British Session Tunes for Nyckelharpa". Whenever there is a bagpipe convention or a Nyckelharpa teaching weekend (annual event at Halsway), you are likely to find them. At Halsway, they have a procession, marred by the fact that there isn't a single song known by all nyckelharpa players. Vicki's mission was to write a piece of music that every nyckleharpa player can learn, so that at next year's event, they can all play in harmony. She actually has written two tunes, "The Halsway Parade" and "The Quantock Reel". The two tunes are segued together to form the third track on this album. Marvellous, but I do feel that the image of a procession of nyckleharpa players all playing something different is very amusing.

There are thirteen tracks on the album, but it does depend on how you count the tunes. The last three tracks form one suite of music that they wrote and played at a friend's wedding. But each of the three tracks comprised two tunes. So that could be one, three or six songs depending on your point of view.

There's a lot of humour on this album. The sleeve notes describe the first track, "The Golden Glove" as 'Nobody gets hurt and everyone lives happily ever after. Except the squire, presumably, who gets jilted at the altar. But then he's landed gentry so nearly everyone likes to see him fall flat on his noble nose.' I loved the humour behind track eight. Again it comprises three tunes that flow from one to the other. The title comprises a few umlauts, and other odd characters, so it is roughly something along the lines of: "Hornlat Om Mobil Saknas/ Brollopsgavan/ Piggelunkschottisen". The theme of the first tune is that if you lose your mobile phone, you can't phone your friends to tell them, but the problem is solved if you stand at the top of a mountain and let everyone know with a cowhorn. 'Piggelunk', apparently, is a Jonkoping (again add umlauts) dialect word that means 'hedgehog'. They describe it as a word they discovered on the internet, 'so it must be a real word'.

Four of the songs on the album have traditional lyrics that they have written the music for. Whether it is their use of old instruments, but they sound incredibly authentic. "The Bold Fisherman", on the other hand, is entirely their own work, but it too sounds completely like a traditional song, describing a chance encounter between some young maiden and a fisherman. Like most young maidens in the genre, she only has to greet the stranger in the first verse and she's married by the end of the song. Maiden's were obviously freer with their affections in those days.

When I saw them play last year, many of their songs were introduced with a body count. There's only one song on the album that adds to their total: "The Blantyre Explosion", as it deals with a mining disaster in which 240 young men were killed. (They point out in the sleeve notes that the song quotes 309 men died - either way, not a bad death toll for a folk song.)

By far my favourite track on the album is Jonny's "Canon", described as 'late baroque style'. The video that they made for this track is incredible. The two of them play seven different instruments bewteen them. The main bulk of the video was shot in a single take, with the camera left to run for just over twenty minutes, whilst they walked into shot, played an instrument, then left, did a quick change of clothes, then walked back in to shot and played a different instrument. They then filmed some close ups, and edited it together to look as if there were seven of them playing simultaneously. Video genius and musical genius.

Noticed that Daria Kulesh will be releasing her second album early next year with a string of concerts dueting with Jonny. Very much looking forward to that.