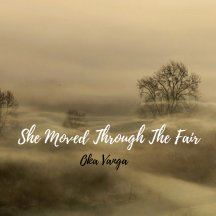 
In 2013, Oka Vanga played a gig at the Natural History Musuem in South Kensington. I wasn't aware that the Natural History was a music venue, but I must look out for more as it is such a wonderful building. Sadly there's only about two seconds of video from that gig available on youtube that I have been able to find. Also, sadly, I didn't know of Oka Vanga in those days, otherwise I would have been there like a shot.

The Natural History Museum celebrates Evolution, particularly the Wallace and Darwin theory of natural selection, characterised by species that are best fitted for survival by adapting to suit changes in the environment. And who better an example of this than Oka Vanga? When I first saw William Cox and Angela Meyer, they were a purely instrumental duo. Two utterly brilliant acoustic guitarists who wrote intricate works where the tune weaves back and forth between them to create music that invokes images in your mind. Trouble was, despite their talent, they found it hard to get bookings in folk clubs, as many folk club organisers felt that their audience preferred listening to songs with a lyric. So, in true Natural History style, they have evolved. Yes, they still play their instrumentals, but as well as being a virtuouso guitarist, Angela also has a lovely voice, so now sings as well. Their set list now contains instrumentals, songs that they have written and traditional folk songs.

What better way to announce to the world that any folk club audience will appreciate you, than by releasing a single of a live performance of "She Moved Through The Fair"? And just to emphasise that this is a new look Oka Vanga, gone are the two guitars, as Will perfoms on a Ukelele.

The origins of the song are lost in time, but the modern version was first published in 1909 in an anthology called "Irish Country Songs". The tune was discovered by Herbert Hughes, who published the book, and the lyrics collected and adapted by Padraic Colum. Two of the originally published verses were written by him, and he subsequently wrote another verse, which was published in his 1916 collection "Wild Earth: And Other Poems".

It is a brave decision for Oka Vanga to release this track, as the list of people who haven't sung it is probably shorter than the list who have, and everyone has their favourite version of the song. It has been covered by people as diverse as the Yardbirds (an instrumental version called "White Summer"), Mike Oldfield, John Martyn, Marianne Faithfull, Donovan, Dominic Behan, The Sutherland Brothers, Roger Whittaker, Tony Christie, Simple Minds, Van Morrison, Feargal Sharkey, Boyzone, Sarah Brightman, Hazel O'Connor, Sinead O'Connor and Art Garfunkel, but to me, the song is best known as "She Moves Through The Fair", sung by Sandy Denny on Fairport Convention's album "What We Did On Our Holidays".

It is a brave decision, but one well taken, as their version is at least as good as any of the others.

The single is available as a download only via their website. They have an interesting marketing policy such that when you download it, you decide on the price you wish to pay. The message is clear. Oka Vanga are a truly remarkable duo, who will capture the hearts and minds of any audience. Do not hesitate to buy their records, to see them live or to book them as guests at your music venue (particularly if you are the Natural History Museum and want to demonstrate evolution in the making).

She Moved Through The Fair (Live Single)