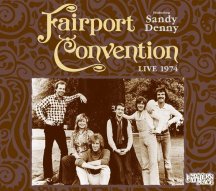 
Unfortunately, circumstances in the real world necessitated a rewrite of this review before I'd even finished the first draft. Dave Swarbrick had been ill with emphysema for a number of years, so much so that an obituary for him was written by the Daily Telegraph, in 1999. He had a lung transplant in 2004, and resumed his musical career, was recently ill again, but had announced that he had pulled through. I therefore started to write this review rejoicing that Swarb was better again, but sadly, he passed away on the 3rd June 2016.

I've always had a strange relationship with Fairport Convention. They are one of those bands that I have seen live several times, and each time I have always been very impressed, but I haven't ever really bought many of their albums. The reason is, being a fan of the band called Strawbs, I was put off Fairport when Sandy Denny left Strawbs to join Fairport. In my opinion, she had been poached, which made Fairport the bad guys. Their album, "Unhalfbricking" featured Sandy's song, "Who Knows Where The Time Goes" - a Strawbs' song - and as a result I still haven't forgiven them enough to buy "Unhalfbricking". I did force myself to buy "What We Did On Our Holidays", and "Liege And Leaf", and I adore both. Like the rest of the world, I consider "Liege And Leaf" to be one of the best albums ever. High time therefore, I thought, to finally add some more Fairport CDs to my collection, and what better place to start than with a brand new release?

"My Father's Place" is a live album, recorded in 1974 during Sandy Denny's second tenure with Fairport. Must confess, that I was a little concerned that as it had taken over forty years for the recording to be unleashed on the public, the recording quality might have been not up to scratch, but I needn't have worried. There might be a slight hiss audible in the quiet periods between tracks, but other than that, the quality is pretty much everything you'd expect fom a live album recorded today. The balance and mix is pretty much perfect.

One thing I hadn't realised, though, which might explain why the album wasn't published earlier, is that this is not the fist live album released with this line up from this time. Back in 1974, they brought out "Fairport Live Convention", recorded in various venues from the Sydney Opera House, Croydon Fairfield Halls, and the Rainbow in London at concerts from December 1973 to January 1974,. In 2002, they also released a limited edition live CD which was called "Before The Moon". This was a double CD, but due to "the ravages of time", the master tape had degraded and the second CD was released in mono. It was recorded in Ebbets Field in Colorado. In 2011, they released edited highlights of the limited edition CD as "Ebbets Field". Thus, the majority of the tracks on "My Father's Place" can be found elsewhere, though there does not appear to have been any detrimental effects on these tapes, so this could be a better quality than some of the earlier live albums.

It was recorded in New York, and was aired as a radio broadcast at the time.

There is a mixture of Faiport Convention tracks (such as "Matty Groves") along with material that originated from Fotheringay and Sandy's solo period, including her famous song "Solo", (from which the line "I've always kept a unicorn" comes from, - the title of her biography and of a recent acoustic double CD). The version of "Matty Groves" is stunning. Love the "Liege And Leaf" version, but there is so much energy in this live rendition. The guitar break would not be out of place on a stadium rock finale, most unexpected in the opening number of a set from a band famed for more gentle folk rock songs. My absolute favourite track, though, is the Dylan song, "Down In The Flood". Sandy's voice on this is like nothing I've heard from her before. Gone is the demure shy sound from her days with Strawbs. Instead, she has a massive, hard rock voice, sounding very much like another of my all time favourites, Grace Slick, from Jefferson Airplane.

For someone like me who hasn't heard the previous live material, this is a wonderful introduction to how great this band was, and indeed still is. For others, I'm sure, there is much to love on this album, particularly "Ballad of Ned Kelly", which I don't believe appears on any of the other live recordings from this period.

Sadly, there is almost no video recording of Sandy from her time with Fairport. Luckily, there are audio recordings such as this. I was lucky enough to see the 1971 line up of Fairport reform to play the entire "Liege And Leaf" album, with Chris While standing in for Sandy, but even that wasn't filmed professionally.

"My Father's Place" takes on even more poignancy, not just because of Sandy's untimely death, but because we have just lost Dave Swarbrick as well. What better way, though, to celebrate Swarb and his "Boedicea" than by listening to them at their peak?