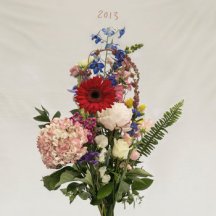 
Slight confusion over the title of this album. The promotional blurb that came with the review copy referred to it as "Anthology", but the promotional CD label calls it "2013", as does the photocopy of the sleeve and as does Meilyr's website. I hope that the album is actually calleed "2013" because I think that if it was called "Anthology" there would be a good chance it would be mis-filed in record shops, and this record deserves as wide an audience as possible. I do like the cover, it looks like a "With Sympathy" card, but with such a simple title, "2013", and without the artist's name on the cover, there is a risk that this too could limit sales. I guess not having the artist's name on the cover didn't harm Pink Floyd's Atom Heart Mother or Led Zeppelin's fourth album.

Fans of the Band Race Horses are likely to be wondering how Meilyr's solo album compares with the band's earlier releases. Has Meilyr, on his own, managed to match the quality of that of a full band? Unfortunately I am not the reviewer to answer that question, as before listening to this album I am afraid I had never heard of Race Horses. However, I have now listened to a couple of their tracks on youtube, and must confess that though I very much liked what I've heard, 2013 is an order of magnitude better. Race Horses fans neeed have no worries about whether Meilyr can cut it as a solo artist. He has raised the bar much higher.

Whilst still at school in Aberystwyth Meilyr formed his band, originally called Radio Luxembourg, and went on to study the tuba at the Royal Academy of Music. Probably due to legal reasons, Radio Luxembourg had to change their name, so Race Horses was born. Their first album was completely in Welsh, but by the time they released their final album, their material was all in English.

In 2013, though, the band split. In the same year his relationship ended, and Meilyr was left feeling the need to change tack and to seek out a new career. With no clear idea of what he wanted to do, he felt drawn to art, particularly statues, and so visited Rome to seek out some of the works of art there. But although he was not intending to write music there, the inner musician inside him thought otherwise, and he found himself composing.

This led to the concept of creating a musical anthology of every thought that entered his head during that entire year. Yes, there are twelve tracks on this album, and yes there are twelve months in the year, but the songs aren't organised as January thoughts, February thoughts, etc. Like many a concept album, the songs are cryptic. They are layered, deep and complex, which means that no matter how many times you listen they reward you with revealing something new each time.

The most wonderful thing about this album is the extraordinary variation. For a start, Meilyr's voice has the ability to switch between soprano and tenor but given that the album attempts to be an anthology of an entire year's range of emotions, the mood and style of the music, as you would expect, swoops through many genres. Most people are used to classical music changing rapidly from from relaxing to crescendo, less so in rock, so it is not surprising that many of these songs are very classical (and even operatic) in nature. Having said that, the first track "How To Recognise A Work Of Art" feels to me to be in the style of the 1980's New Romantics. Five of the tracks though are played by a full orchestra, an orchestra comprised of Meilyr's friends or friends of friends, who had never played together before, and who recorded all five songs in one take, in one day. Many of the songs have been subsequently embellished with "Dark Side Of The Moon" style recordings of rain, bird songs, etc.

I'm also aware that the compl exity and overtly classical nature of this album, mean that 2013 is unlikely to find massive commercial success, but wouldn't it be brilliant if just for once, talent won through, and the album had the sales that it deserves?