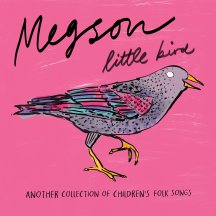 
I'm surely not the only person who has gone to a folk club and heard someone singing Dylan's "Forever Young", then looked around the audience and realised that there is nobody there that the song could apply to. Everyone there has no chance of staying forever young. The best that you could wish on most folk audiences woud be 'may you stay, forever old'.

And clearly we're not going to do that, either. A young folk musician probably looks out from the stage and thinks, 'My career's probably only got another decade before I have to go and become an accountant. This lot will be lucky to make it to 2020, and after that I'll be playing to empty houses.'

So Megson have a solution. Get the younger generation interested in Folk music.

The name 'Megson' sounds like it should be a heavy metal band, but are, in fact, folk duo husband and wife Stu and Debs Hannah. They've produced eight folk albums on their own label, EDJ, but in 2012, decided that somebody had to attract a younger audience, and it might as well be them, so they released an album of children's folk songs called "When I Was A Lad". Since then, along with their normal folk tours, they've introduced tours of day time concerts aimed at children. "Little Bird" is the follow up to "When I Was A Lad", and comprises twelve more songs that children will either know, or can rapidly join in with the actions (such as "The Jumping Song") or can quickly learn the words to join in with (such as "Red Bird").

"Baby On Board" and "Marjory Clogs" are new songs, written by Stu and Debs, but the rest are traditional. I think "Baby On Board" is definitely my favourite, as the lyrics will appeal to parents as well as to young children. If you know Megson, however, it will probably come as no surprise that most of the traditional material was unknown to me. They are known for their arduous research in uncovering old, forgotten songs. "Bobby Shaftoe" and "Coming Round The Mountain" are well known, and most of the songs they have included in "On The Mountain Medley" I think will be known to all, but the rest, I think, are ones that they have unearthed and breathed new life into them.

A couple of years ago, during a concert, they announced that they were worried. Their daughter was almost five. Years before she had asked them when she could join the band, and they'd said 'Not till you are five', thinking that she would have forgotten by then. Unfortunately, their daughter had just reminded them that it was nearly time for her to join them! They joked that next time we saw them, they might be a three piece. Well, I've seen them several times since then, and can report that they are still a duo. However, although uncredited on the sleeve notes, there is a very young voice joining them on "Coming Round The Mountain". Can't help but wonder whether that's the start of Megson the trio.

I have to admit that I do much prefer Megson's normal CDs, but then "Little Bird" isn't really aimed at me. But if you're looking for a good way of introducing young kids to concerts or to records, then this is an absolutely perfect way. Top marks to Megson. May they stay, forever young.