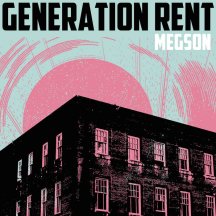 
Husband and wife duo, Stu Hanna and Debbie Hanna, are far too young to have heard the 1972 Genesis album “Foxtrot” and are probably not aware of the track “Get ‘em Out By Friday”, but it is really sad that 45 years after Genesis’s protest song about housing there is still an urgent need for another. “Generation Rent” was written by Stu and Debs after the third time of having their lives turned upside down by a Landlord claiming that they needed to sell the property and so terminating their rental contract. As a tenant you have no security, or stability, or chance to put down roots. Apparently, in the last twenty years home ownership among 25-year-olds has halved, and now just twenty percent of 25-year-olds own their own property.

As is often the case with Megson, although “Generation Rent” is a serious protest song, there is still a lot of humour in it. It follows a couple who still live at home with parents who, not surprisingly, are keen for them to move out and start up a home of their own, but, of course, home ownership is out of reach of so many young people. As their family increases, there is a need to grow the house upwards, downwards and sideways. Then the next generation start dating!

There are two versions of the song on the single, the version on their latest album “Good Times Will Come Again”, and the radio version. Not certain why two versions were necessary as the album track is a similar length and would almost certainly get radio play in its own right.

The single also features an absolutely exquisitely beautiful track called “The Morning Mist”. It is a brand new track, not included on any of their previous albums. From the outset you can tell that this song is going to be heart-breaking, but it has a twist in it that makes it even more cutting. I have to admit, I had tears in my eyes when I heard it. It tells the story of a young recently wed girl, staring out of the window, waiting for her husband to return. It is Winter, and her husband is away until Summer. You’re not told why he is away, but I suspected maybe he had been called away to fight in a war. (Whether intentionally or not, continuing the theme of owning your own home, the girl watches a blackbird nest building.) Listening, you know this is a sad song, and that the husband is unlikely to return, but the reason is a real killer. In her eyes, she is a young girl, but in reality, she is an old woman suffering from dementia, remembering a time many years ago when she had been waiting. A truly beautiful track, and definitely one that needs a much wider audience.

The fourth track on the single is a live version of the title track from their album “The Longshot”. This, apparently, is their most requested track at gigs and you can tell why. It is the most perfectly constructed song I know. It is a metaphor for life based on betting about the outcome of football matches when your team is floundering. At the time it was written, the team that Debbie and Stu supported, Middlesborough was not doing so well, so there is every possibility that the song was an homage to the Boro. Life is a gamble, but when there is very little hope, a long shot is better than no hope at all. The song is beautifully put together, describing a football match in which their team is losing, how an old guy at half time places a bet on what seems to be an impossible outcome, and then doesn’t show up the following week, and the rumour spreads that he has died, but just in case the reason for his absence is due to the possibility that his long shot paid off, maybe the fact that the team is being beaten seven-nil might be a good time for a long shot of your own.

Maybe? Maybe not? But I reckon that it’s a good time to go and buy the single.