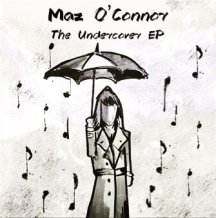 
Delighted to get hold of Maz O’Connor’s “Undercover EP”, as, when it was first released, it was only available at live gigs. Her recent tour didn’t include a venue near me, or one I could travel to and still return in time for sufficient sleep to be able to go to work the next day, so I had thought that I would not ever get a copy. Overjoyed when she announced it could be procured from her web site once the tour was over.

I have always been a bit wary about how effective it is for a singer songwriter to cover other artist’s material. If you are a fan of that other artist, no doubt you prefer the original, and will consider the cover to be a poor second, and if you are not a fan of that other artist, you probably wouldn’t even be tempted to listen to another version of a song you were already predisposed to not liking. Having said that, I am living proof that covers do work. When checking out the performers that had been booked to go to play at Twickfolk I watched a video of Maz O’Connor playing a cover of Jake Thackray’s “Yan Tan Tethera”. On the strength of that video I went to see Maz and have been an ardent admirer ever since.

An EP of some of the covers of songs that are occasionally included in Maz’s set lists should hopefully attract more admirers, but please remember if you listen to this EP that Maz generally plays her own material and is far more than just a cover artist.

Since I first saw her back in 2014 she has increased the weaponry in her armoury. Back then she only ever played an acoustic guitar or a shruti box (a cross between an accordion and a bagpipe), but nowadays she is just as likely to be playing an electric guitar or keyboards.

There are seven tracks on this album. I don’t think I’ve ever seen a collection of songs drawn from such a wide field as this. She has covered a huge variety of genres including Country, Folk, Blues, Jazz, and Punk Rock! There doesn’t appear to be any common theme to the songs, though there are several that deal with relationship break-ups, (including a cover of "Young Hearts Run Free" that I've seen her play live, but which didn't make it to this EP). The majority of the songs were written in the 1960’s, though one is from the 1970’s, one from the 1990’s and one was first released in Basically the only common link is that they are all beautiful songs, and Maz performs them brilliantly.

All the songs on the EP are arranged and performed by her, though Tom Moore (who produced and engineered the EP) also plays strings. Tom is also credited as providing “noises”. Not sure what the 'noises' are that he is responsible for. There is percussion on the first track, a cover of Dolly Parton's "Jolene". That could be either Tom or Maz, I'm not sure. There are also some beautiful "plink" noises on "Jolene" as well. The best way I can describe them is that if you imagine that you worked for the BBC Radiophonic workshop and you were asked to design a soundtrack to a video of an icicle thawing, then imagine the sound that you would create just as the teardrop dripped from the icicle. That's the sound. Again, could be either Tom or Maz.

If you had ever asked yourself the question - 'What could be better than listening to Maz sing?', you will find the answer on her cover of Simon and Garfunkel's "Kathy's Song". The answer, of course: listening to Maz singing both lead and backing vocals. I reckon that Art Garfunkel has one of the most beautiful voices, but Maz is certainly his equal.

As Britain's answer to Joan Baez, it is no surprise that Maz selected a Dylan track, "Don't Think Twice", to cover, but it is far more surprising, to me at least, that she has also covered a track from the Punk rock band Green Day. Both are about relationships breaking up. Green Day's "Good Riddance" is often known by the title "The Time Of Your Life". When Green Day sing it, I am never sure if they are being sarcastic when they sing 'I hope you had the time of your life' - the song title would imply that they were. Maz sings it as if the words are really meant, wishing an ex lover well. It's a beautiful song when arranged as a folk song.

Maz's phenomenal range is brought to the fore in her cover of the Rolling Stones "Can't Always Get What You Want." Again she sings both lead and backing, and some of the notes she sings are extraordinarily high. All perfectly in tune, and crystal clear, and beyond my comprehension that anyone can sing that well.

Typically of me, the only track where I hadn't heard the original, (or even heard of the artist), is the most recent. Sam Smith released "Stay With Me" was released in 2014, and has even been covered by Ed Sheeran, and I'm afraid I haven't heard that either. Apparently the original was supposed to sound like Tom Petty's "I Won't Back Down", so both Tom Petty and Jeff Lynne were given credit as co-authors.

I had always imagined that "Wonderful World", being a Louis Armstrong jazz song, probably dated back to the 1950's, but this isn't the oldest song on the album, having been released as recently as 1967. Maz's is not the first folk artist to cover the song. Eva Cassidy played it on her last public performance before she died, and Katie Melua released a charity record of her dueting with Eva by singing, along with a recording of Eva.

Maz's version though is quite different to Eva's or Katie's. Tom's string accompaniement blended with her voice makes this a truly outstanding version.

And a truly outstanding EP.

Good Riddance (Time Of Your Life)