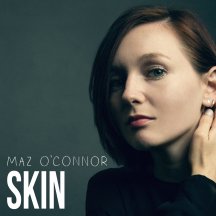 
Once there was wax cylinders, but as far as I know they didn't catch on as a medium for listening to music. Then came 78s, swiftly followed by vinyl 45rpm singles, long playing 33rpm albums, cassette tapes, reel to reel, and a host of other media, before we finally ended up with CDs. Ah, but it didn't stop there. CDs are so twentieth century. Along came digital downloads, youtube, soundcloud and spotify. But a struggling musician can't sell digital downloads on their merchandise desk. So the world needed a hero to devise a solution. A hero or a heroine. Enter Maz.

The memory stick, engraved with her name, contains a PDF of the lyrics of her single "Skin", an audio recording of the track, a copy of the video of "The Longing Kind" (available on Maz's youtube channel), a video recording of Maz playing a cover of the Bee Gees' song "To Love Somebody" (fairly sure that video isn't available anywhere else at present), and Maz's new video of "Skin". At the time of writing, the single isn't officially released yet. It will be released on the 14th October, with the video being released on the 21st. The memory stick is available at live gigs, though, and the single can also can be ordered when you buy tickets for her gigs.

"The Longing Kind" is the title track of Maz's recent CD, which I reviewed for Fatea back in March. Just to set the record straight, in my review of her album, I made a couple of mistakes. Her song "Greenwood Side" is based on the Millais painting "Ophelia", and I said that the model in the painting was Effie Grey but, of course, the model was Lizzie Siddall. Also, her song "Emma" referred to another model from another painting. I guessed in my review that it was Lady Emma Hammilton, painted by George Romney, but the song was inspired by Emma Dobigny, a muse of Degas.

The "Skin" video is beautifully choreographed, I'm guessing by Annarita Mazzilli, who choreographed and danced in Maz's video "Emma". The dance moves are quite stylised and fit well with the song, highlighting the ambiguity between gentle loving contact and more aggressive contact when fighting. At the end, there is a close up of Maz's face with a tear welling in her eye, and I realised that I too had a tear forming. Not quite sure what I found so emotional about some people dancing, never really been a fan of dance, but there is something in this video that I found quite emotional. Could well be that it's just such a beautiful song.

The song starts with Maz accompanied just by piano, but about two thirds of the way through the song crescendos with drums, guitar and a chorus of multiple voices (all of which could be Maz).

So of course, having made errors in my review of "The Longing Kind", which I was able to correct here, I'll be able to correct any errors in this review when I review Maz's next work, which will probably be on holographic paper, or mind meld. I've probably got that wrong as well. One thing I know I definitely got right, and that was buying this single. Really love the song, really love the new video and love her interpretation of "To Love Somebody".