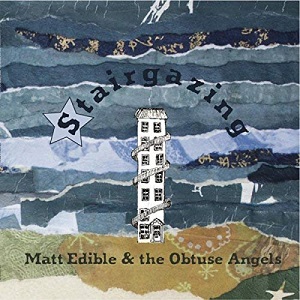 
Stairgazing is the debut solo outing for the former frontman of the fantastically named The Edible 5ft Smiths, cult favourites from Hull. Since their demise in the 90s, he's also fronted The Holy Orders and been called "the best thing out of Hull since The Humber Bridge by Josh T.Pearson. His catalogue of songs had been languishing away until he was finally prompted to do something with them by the mundanity of life and an encounter with mortality. Working with Joe Bennett as producer, drummer Mike Monaghan, and Mike Gale, he turned those almost forgotten songs into Stairgazing.

There are clear elements of 90s Britpop on the album opener, with Jumping Houses sounding eerily similar to Manic Street Preachers. Edible's vocals certainly have more than a touch of the James Dean Bradfields, which adds real depth and an impressive range, albeit without the Welsh lilt of the Manic's singer. Advent Beard is a fun little oddity, an alternative Christmas song with a strong vein of humour, and the odd Darkness-like high note thrown in for good measure. It may be a very hot summer right now, but an upbeat Christmas song is always a joy.

The title track drops the tempo a little to give one of the highlights of the album, a track that keeps getting better with every listen. The raw almost primal screaming in the latter half is spine-tingling. Nightclubbing is a wonderful slow building anthem which will draw inevitable comparisons with Oasis, but there is a vast mixture of influences at play. The Healing is an epic track with everything chucked in; a slow building track mostly free of vocals to let the instrumental really soar.

Edible's solo(ish) debut is an impressive affair, well put together and always interesting. That may sound like damning with faint praise, but it makes for great repeat listening, always finding something new with every spin. It's a real grower of an album, and while it may not exactly underplay the 90s influences, this never feels like a record that is out of its time. All in all this is well worth a listen or three.