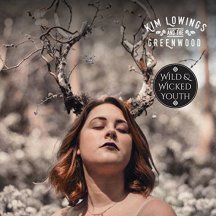 
The first thing you’ll notice when you listen to Wild Wicked Youth is how amazingly beautiful Kim’s voice is. In the opening bars of “In Spirit” her voice is deeply rich, full of harmonics in a similar vein to Karen Carpenter’s. Not saying that Kim sounds like Karen, but I suspect that she would be capable of covering one of the Carpenter’s hits and would do it justice.

The copy of "Wild and Wicked Youth" that I have to review is a promotional copy, so came in a cardboard sleeve with no covering booklet, so I don’t know who is credited as author on any of these tracks. Kim is a singer songwriter, so I am going to assume that she wrote all of the songs that aren’t traditional or covers, and that she, (along with her band members) wrote the arrangements of those songs that are traditional. Massive apologies if I’ve got any of that wrong.

“In Spirit”, the first track, I’m pretty certain was definitely written by Kim. It’s a tale, sung from the point of view of someone who has committed suicide and whose soul is now trapped though she longs for the sea or the land. For such a sad theme, the song is a merry foot tapper.

The second track, “Oyster Girl”, is a traditional song. Often, in songs of this type, the ending is quite predictable: either the young maiden marries the stranger that she meets or she loses her maidenhead, but doesn’t get her man. As oysters are often thought of as being an aphrodisiac, I was fairly sure I’d know how this song would end, but I was quite wrong. The young girl ends up stealing the gentleman’s wallet and then running away. As with many traditional songs, there are several versions of this song. In this version, having stolen his wallet then pays the landlord for the use of the room. In other versions, the guy ends up without his wallet and still owing for the room.

“Farewell My Love So Dear” apparently has roots in German folk music. Don’t know whether Kim translated the German to English, but the song definitely has a German feel to it. Excellent double bass riff from Dave Sutherland, one of her band members collectively known as the Greenwoods.

Donovan did a version of “The Cuckoo”, another traditional song that Kim covers, but this time the version makes sense. In the Donovan version, the verses sing of the perils of a gambling addiction, which is something that doesn’t seem directly connected to cuckoos in my mind. Kim has found an alternative set of lyrics relating to an unfaithful lover. As cuckoos are renowned for laying eggs in other bird’s nests, this seems a much more appropriate theme.

“The Tortoise And The Hare” I presume is a Kim original. She has used the characters from the Aesop fable as similes for herself and another (possibly a lover or partner), and the race in which the tortoise won by taking things slow and steady, is a metaphor for something that I’m not sure I quite fully understand. ‘I’ll see you at the finish line’, sounds to me that she could be referring to making love, and the finish line is . . . well, you know what I mean. The album is called “Wild and Wicked Youth” after all, so it is quite possible that she has adapted this children’s fable into something more X rated. On the other hand, the song could be quite innocent and I have just demonstrated that I have a filthy mind.

Have to confess that I’ve only ever seen Kim perform once. She plays keyboards with “The Company Of Players”, a group formed by Jess from “Said The Maiden”. Kim is an amazing keyboard player, but her signature instrument is a dulcimer. On this album, she plays two different types of dulcimer, one called a stick dulcimer which is something I’ve never heard of before. However, on my favourite track on this album, “The Firestone”, Kim is back to playing keyboards.

When I saw “The Company Of Players”, Chris Cleverley introduced his contribution to the project, the sensational song, “Fortune Forbids” by apologising that his roots came from heavy metal, and so “Fortune Forbids” was slightly heavier than the normal folk song. Kim called out that she’d always wanted to be in a heavy metal band and to emphasise the point she formed devil’s horns with her hands. Her heavy metal influence is clearly audible in “Firestone”. Although accompanied by just a gentle piano, this is a rock anthem. It is beautiful. Would love to hear her sing it with Chris Cleverley accompanying her on an electric guitar. Again, not too sure I’ve interpreted the song correctly, and again, I’m pretty certain it is a Kim original, but I think the Firestone is a mirror, and she is gazing into its crystal reflection trying to find her soul. A stunning song. Cannot rate it highly enough.

The next track is actually two originals, strung together in to one. “Wyle Cop” is an instrumental, and is the name of a street in Shrewsbury – I believe the longest parade of independent shops in the UK. This is followed by “The Wonderful Mr Clark”, another Kim original. No idea who the Mr Clark is, but I wonder if he was a teacher. Perhaps Kim had a crush on him at school, perhaps it is ironic, or perhaps she had a Wild and Wicked time in her youth and found favour with the teachers by writing songs about them.

The next two tracks are both traditional, “Bold Riley” continues the nautical theme of “In Spirit”, and “Oh The Wind And Rain” is a variation of Child Ballad 10, often called “Twa Sisters”, or “Two Sisters”. I guess it is a song warning of the dangers of recycling. Put yourself in the place of the miller. I mean who amongst us, if finding the drowned body of a murdered girl washed up on a river bank, wouldn’t take it upon us to recycle the body by making a musical instrument out of it? Surprisingly, it appears that this isn’t necessarily a good idea. In this version of the song, the instrument will only play one song, “Oh The Wind And Rain”. In other versions, the instrument is played at the wedding of the sister, and the instrument sings that it was she that had murdered the girl.

“Away Ye Merry Lasses” was written by someone called Georje Holper. Afraid I don’t know anything about her, but it’s a very jolly song, I presume sung from the point of view of a witch on Halloween. Rather than going out with the boys, as usual, tonight is the girl’s night out. A chance to fly around on broomsticks with other, like-minded witches. Again, the gathering of witches could be a metaphor for a hen party, and I have found websites that mention “Away Ye Merry Lasses” in the same sentence as ‘lesbian music’, whatever that is. Will stick with my literal interpretation that this is a celebration of Halloween.

“The Newry Highwayman” is another traditional song, and includes the lyric ‘wild and wicked youth’, from which the album title derives. All the while the highwayman was robbing the rich to support his family, his family loved him. Now that he is on the gallows, his family have rejected him for his misdemeanours.

The final track “Fly Away” is, I think, mainly a Kim original based around a song written by Albert Brumley in 1929. Albert worked in a cotton farm in Oklahoma, and dreamt of leaving, but his song, which sounded like an old slave spiritual, was adopted as a Hymn, and is often played at funerals. Kim has kept the title and chorus, and added her own verses.

One of the members of her band, who plays guitar, bouzouki, bodhran and backing vocals is Andrew Lowings, Kim’s father. Kind of envisage that the rock and roll lifestyle could be somewhat hampered if your father is on tour with you. Unlikely that you’ll trash many hotel rooms under those circumstances. Can’t imagine that Kim can have led too wild or wicked a time, so I’m guessing the title could be ironic. Whatever the meaning, this album is a delight to listen to. Kim’s honey vocals, and the beautiful arrangements and songs means you’ll come back to it again and again.Particularly "Firestone"