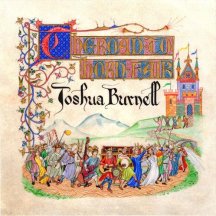 
The artwork on Joshua's album "Into The Green" by Lord Of The Rings artist Ted Nasmith, looked unsurpassable as an album cover. Having set the bar even higher on his Songs From The Seasons project, using commissions from none other than one of my all time favourite singers Annie Haslem from Renaissance one would have thought it impossible that the artwork on his new CD "The Road To Horn Fair" could be even more impressive, but he seems to have managed it. The cover is a fanfold designed like an ancient manuscript with an Old English font, liberally scattered with the types of images that the monks would sketch in the margins whilst they were scribing and main artwork by an American artist Randy Asplund. Inside, it opens up to a castle, protecting the CD, with 26 runes around the outside edge of the CD. There are 22 letters on the cover round the edge of the CD, and on the rear of the castle is an eighteen line message, all in runes. I am assuming that there is a position that the CD can be placed, such that each rune lines up with a letter that would allow you to translate the message. Working on the principle that one of the words was likely to be "Joshua", I've tried various combinations but haven't cracked it yet.

But you don't generally buy a CD for the artwork. You buy it for the music, and Joshua's CDs are always exceptional in that respect too.

He is an enormously talented writer as well as a singer and multi-instrumentalist, but this album, as was his last, is his take on traditional folk songs. His take being rock, so if you like Fairport or Steeleye you will love Joshua Burnell. Having bought a second hand vinyl Steeleye Span album, Joshua developed a taste for folk rock and decided to research and record a different folk song every week for a year, resulting in his Seasons project; highlights of which formed his last album, "Songs From The Seasons".

You might have thought that after recording fifty-two folk songs that Joshua might have grown tired of folk and folk rock, but the majority of the tracks on this album were actually recorded before Joshua decided to start his Seasons project.

Have to start this review with a congratulations to Joshua and Frances Sladen, as they got married this year. Joshua has a beautiful voice, and so does Frances (Fe), but when they sing together their voices blend together so perfectly it is divine. As evidenced by the first track on the album, "Pastime With Good Company". This presentation commences with two a capella verses before the rest of Joshua's band join in. The song was written by King Henry VIII, who is credited on the sleeve notes as "guest songwriter". A copy of the original score, reproduced from the British Library, is revealed on the sleeve when the CD is removed.

"Pastime With Good Company" segues directly into "Berkshire Tragedy", a variant of Child 10 that I hadn't heard before. You may not have heard this particular variant but you will know other variants as the song exists in many different forms: "Twa Sisters", "Two Sisters", "Three Sisters", "The Bonnie Bows of London", "The Cruel Sister", "Minnorie", "The Wind And Rain" and so on. Apparently there are at least 21 different versions in the English Language, with at least 125 different versions in Swedish! The song generally recounts the drowning of a young girl by her elder sister, and often goes on to tell how, after her body was washed ashore, someone constructed a musical instrument from her bones and hair. The instrument is then played to the girl's father and tells the father in song how the girl died. In this version, the drowning girl is rescued by the miller, who robs her and then pushes her back in the river. The miller is then hanged for his crime, leaving the sister free.

Joshua is a strong feminist, and is often pained by the old lyrics which celebrate taking a young girl's maidenhead leaving her bereft in poverty. So much so that on his season's project he wrote an additional verse to "The Two Magicians" such that the female magician vanquished the male and retained her maidenhead. There are two such tracks on this album, "Cold Haily Windy Night", in which a poor young girl takes sympathy on a soldier begging for shelter for the night, and "The Knight And The Shepherdess", in which a young Shepherdess loses her maidenhead to a Knight who then rides off afterwards. In the latter song, the girl runs off after the Knight, meets the King and demands that the Knight marries her, and the King then agrees. Joshua, at first was horrified that the girl ends up married to such a cad, but realised that her fate was probably better than that of the girl in "Cold Haily Windy Night". I challenge you to listen to "Cold Haily Night" without tapping your foot.

Joshua explains that there are two possible fairs that could have inspired "Horn Fair"; one still celebrated today, which features a cricket match and a sheep roasting, the horned skull of which is presented to the winning team; the other, no longer celebrated, marks the day that King John had an affair with the miller's wife from Charleton, and so gifted the town the right to hold a fair each year to celebrate. Apparently it was celebrated in quite a debauched manner! The song describes a chance meeting of a man and a woman on the way to the fair. She refuses to have anything to do with him on the journey, possibly implying that something might happen when they arrive at the fair. Their arrival at the fair is greeted with an instrumental break, to leave the rest of the story to your imagination.

Having said how remarkable Joshua and Frances's voices are when they sing together, I'm quite surprised that my favourite track on the album doesn't feature Frances. "Raggle Taggle Gypsies" is the only track on the album without the lyrics included in the enclosed booklet. Presumably Joshua couldn't get the copyright to be able to print them. The track starts off with a mournful violin and builds to a full rock track. During the short instrumental break each instrument, (drums, bass, guitar and keyboards) takes the lead for a very brief few bars. The song could quite easily run for thirty minutes or so, with longer instrumental breaks, and I imagine would make an awesome finale to a live set. I especially love the keyboard work on this. When Joshua lets loose on the keyboard he sounds so like one of my childhood heroes, Jon Lord.

And the best thing about this album? In the booklet there is a list of the other Joshua Burnell albums available from his website. It includes a 'coming soon...'. Whenever you buy a DVD, or visit the cinema you get trailers of forthcoming attractions, so why not on a CD as well? I am so excited about Joshua's next release. His next album will simply be called "Seasons", so is presumably a box set of all of the fifty-two tracks he recorded in 2017. I cannot wait.