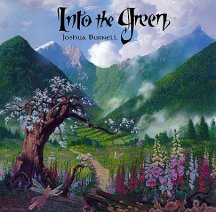 
Firstly, I need to give a big "Thank you" to Neil King. He recommended Joshua Burnell to me on the grounds that he thought "Into the Green" would be 'right up my street'. I can't believe how well Neil knows me, but he was dead right. This album is very definitely my type of music. I'd never heard of Joshua Burnell before, but will definitely look out for him in the future. He comes from York, and this is his first album, though he has previously released an EP called "Lend An Ear".

The cover is a work of art in its own right. The front sleeve is a beautiful painting of a fantasy mountain scene, complete with little flying fairies in the undergrowth. The artwork is by Canadian artist, Ted Nasmith, most famous for his work on Tolkien's Lord Of The Rings and The Silmarillion. It's a digipak case with an extra flap that covers the CD itself, so when you open up the case, the CD is peaking through the gaps between a forest of trees.

His website describes his music as 'traditional and original folk songs and tunes'. That is a massive understatement, in my opinion, but does avoid using the word 'prog'. Sadly, there are many people who are put off as soon as 'progressive rock' is mentioned, so let me assure you that this is no prog rock dinosaur. There are definitely very strong roots here in folk and celtic rock, but if I were to mention that Angela Gordon from Mostly Autumn plays the flute on seven of the tracks, and that his band includes a violinist/ viola player, a melodion player, a cellist and a double bass player, you'll know that this is no ordinary folk album. Joshua, himself, is credited as playing vocals, acoustic, 12 string and electric guitars, Yamaha grand piano, drums, Hammond organ, glockenspiel, autoharp, and something called a Tibetan singing bowl. Quite definitely a step up from traditional folk, and quite definitely, in my opinion, worthy of a mention in any progressive rock hall of fame.

The album is divided into two halves, I guess the equivalent of the two sides of a vinyl record. The first seven tracks, all written by Joshua, are slightly older material, and perhaps slightly closer to folk rock than to prog rock. On the first track, backing vocals are provided by Frances Sladen, who provided harmonies on his EP. Her voice blends really well with his, and in my opinion, it's a shame that she only appears on just one of the tracks.

The second track, "The Smuggler's Tale", has quite a traditional folk song theme. The miscreant, (he's more of a murderous robber than a smuggler), falls in love with a beautiful young maiden, but there's a twist to the normal tale. The miscreant isn't the hero. It's more of a feminist song, and there's no wedding bells at the end.

By the third track, though, you are beginning to realise that this is a bit more than traditional folk. The lead instrument on "The Old Man And The Tree" is a piano, played very much in the style of Rick Wakeman. (More along the lines of the Wakeman solo at the start of Cat Steven's "Morning Has Broken" rather than his more electronic ouvres.)

"Fair As The Heather" is another song with a strong feminist theme. The maiden in question in this song, I am sure is a metaphor, but I'm not quite sure a metaphor for what. Something like Imagination, or Human Spirit, or Love. The people are enslaved in misery, but their maiden wanders free, returning throughout the seasons to try and save them.

My favourite song in the first half, and probably on the whole album is the seventh track entitled, "Forest Wanderer". It starts simply with an acoustic guitar, but the instrumentation builds steadily throughout, till it sounds as if there's an entire orchestra playing. But it is the vocals that are so stunning. Joshua sings two separate parts, not in harmony or as a duet, but both at the same time. The effect is totally hypnotic.

If the second half of the album was more of the same, I would rate this album very highly, but Joshua raised the bar with his newer material and elevated the album from being merely brilliant to being a tour de force. Afraid that there's no getting away from it, though. With a Jethro Tull like flute running through the last seven songs, and a Peter Gabriel/Steve Hackett era Genesis style story linking the last seven tracks, the second half of this album is very definitely progressive, but please don't let that put you off.

Joshua's parents had adopted three sheep, and Joshua was sitting in a field up in the mountains in the South of France looking after the sheep when he was inspired to write his "Into The Green" epic work. I say 'epic' but although the story is sword and sorcery/ good versus evil/ dungeons and dragons style tale, there are no epic battles or sword fighting. The plot, told through these seven songs, is deliberately underplayed, and is more akin to a retelling of little Bo Peep than a typical fantasy adventure. The seven songs are all stand alone songs in their own right, but there are common musical threads that link them and they each progress the story of a shepherd boy, (described as looking remarkably like Joshua), attempting to recover his sheep after they were stolen by gremlins. Rather than battling the gremlins with cold steel, he uses a feather, as, apparently gremlins are scared of feathers, and when he finally comes to rescue the sheep from the clutches of a dragon, he overcomes the beast by singing it to sleep with a lullaby.

Sing For The Island