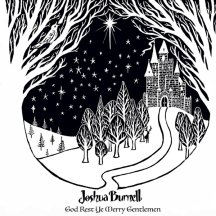 
I suspect that most musicians harbour dreams of producing a Xmas single which, like Slade’s “Merry Christmas Everybody”, gets played year after year and so provides a comfortable nest egg and pension. I guess that there is a large risk in releasing a single aimed solely at the Xmas market though in that for eleven months of the year nobody is likely to want to buy a record tinged with the sound of sleigh bells. So, if you are looking to make a fortune from such a record, you would need to release it as early as possible in December to maximise sales.

I think, therefore, that the reason for Joshua Burnell to release “God Rest Ye Merry Gentlemen” as a single was nothing to do with trying to stockpile a pension. The single was crowd funded and advanced copies weren’t released to pledgers until December the 21st. By then, it is a bit too late to attract much radio play.

No, the single was released to highlight a major project that Joshua has commenced for 2017.

If you search for his website on Google you will see it described as “Traditional and original folk songs and tunes”. His last album, “Into The Green”, although definitely having roots in folk, veered closer, in my opinion, to progressive rock, but this new project sounds as if it will be returning back to the folk music camp.

The single “God Rest You Merry Gentlemen” comprises two tracks, along with a cover designed like a Xmas Card, with some interesting historical facts about the origins of the music. God Rest Ye Merry Gentlemen, for example was written as a form of rebellion against the 15th Century Church which dictated that all music sung in a Church had to be in sombre Latin. The second track, an instrumental, is titled “The Official Brawle”, an English translation from the original French “Branle de L’Officiel”, a 16th Century French tune which was subsequently set to the lyrics of “Ding Dong Merrily On High”. There is therefore every hope that the "Seasons" project will also be educational as well as musical.

If you own, or have seen a copy of “Into The Green”, you’ll be aware that the cover art of a Joshua Burnell record is as important to him as the music. The Xmas card themed artwork for the single was done by illustrator Rachel Croft, who is a singer songwriter from York, as well as running her own jazz band.

More impressively to me, the artwork for the Seasons albums will all be done by the lead singer of one of my all time favourite bands, Renaissance, Annie Haslem. Definitely a project worth following through the coming year. And who knows? Maybe next Xmas, and every Xmas to come, radio stations up and down the land will be playing "God Rest Ye Merry Gentlemen".