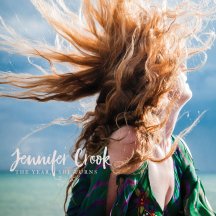 
I suspect most people will not remember 2016 too favourably. We lost so many good musicians that just about everyone will have some reason for being glad to see the back of it.

2016 though, to me, was the year I discovered the remarkable Jennifer Crook. Yes, I had heard of her before this, because I’d seen Kara cover her song “Carnforth Station”, but I didn’t get to see her perform live until May 2016, when she played at Twickfolk.

On her first album, “Merry Go Round”, she had written a song called “Come September” and from that she had got the idea to each month release a song about that month, for an entire year, and then release an album of the songs at the end. At Twickfolk she played her March song, “The March Hare” and a song that she had just finished recording that morning, “May Madness”, and I have been addicted since and have religiously downloaded each song from her Bandcamp site as she released them.

As a result, I already knew all the songs intimately before I bought the album, some of them inside out, and yet I still can’t stop listening to it.

I always try and video concerts if I can, but will only make the odd song public if I can get the artist’s permission. More often than not, most artists either prefer me not to do or don’t ever reply, so I was delighted that Jen was happy for me to post a couple of her songs on youtube. She even said, ‘It would really help me out if you could make “May Madness” public, which of course I did. She then asked if I could make a video for her for “May Madness” with clips of dancing round a maypole, a challenge I relished, and since then I’ve made videos for several of her songs from “The Year, She Turns”. As a result, I’ve listened to these tracks many, many times and don’t think I’ll ever grow tired of them.

The songs really do seem to reflect the particular season, from the opening sound of Big Ben chiming in the New Year, to the closing few notes of Jingle Bells. Think Vivaldi’s “Four Seasons”, with finer resolution (and finer music in my humble opinion).

“January’s Here” is full of promise for the year to come, tinged with tax returns, not enough money, cold winds, and too much whiskey. “February” heralds the approaching Spring, with daffodils and roses budding, but is still characterised by cold rain like tears. There’s a slightly naughty double entendre – ‘Roses bloom in February, lucky you if you get any.’ “The March Hare” feels to me like a cross between ‘Alice In Wonderland’ crossed with the first track on her previous album, “Long Drive Back Home From Love” – ‘It’s a long way from nowhere to nowhere – let me know when you get there.’

“April Is My Friend” announces that Spring has definitely arrived. Even if there is a shower, the sun is just round the corner. “May Madness” again, I feel, has links to another track on “Carnforth Station”, this time “The Net”. There is such warmth in Jen’s voice that sometimes when she sings a sad song you don’t at first realise it. “The Net” and “May Madness”, I believe, are both about a trip she made to the beautiful Island of Skye, beautiful scenery, beautiful people, but unfortunately her partner fell out of love. I listened to “The Net” loads of time thinking it was a happy song before I realised it was actually heartbreaking, and I listened to “May Madness” loads of times before realising it covered the same event. “Venus In June” has a very astral feel to it. For the video I made for this track I produced a cartoon version of Gerry Anderson’s “Fireball XL5”, clearly something way before Jen’s time, but I felt it really suited the timeless, floating feel to the song.

“The Last Day In July” is about kite flying, with your dreams soaring up on the breeze along with the kite. “The August Moon”, is about swimming in the sea then resting on the beach by moonlight and firelight, and falling in love. She sings ‘I fell under your spell, did you fall under mine’, and I have to admit that I have. “September Rain” leads us on to Autumn and although there might be rain, it makes beautiful patterns on the window, and helps grows the grain.

“October Road”: the year is getting old, we’re growing tired but there’s so much to do, and much of that involves being behind the wheel. This is a really good song to drive to, with a throbbing bass rhythm beating along with the throb of your engine. “November”, the time of fireworks. Once they might have seemed scary, but now, as an adult, there’s no need to watch from behind a wall. Again the song hints at tragedy. With a sparkler she writes ‘I Love You” in the air, but when she turned around, there was nothing there. The sparkler, the message, the beauty, the month and love are all transient. The year is nearly over, which brings us to “Slow Down December”. Who hasn’t suddenly realised that Christmas is nearly on us. We’ve had a whole year to make plans and get organised, but suddenly there’s no time left. The year, she has turned.

Would be very difficult to say which of these tracks is my favourite. Simply adore them all. Would probably have to pick "Slow Down December", if forced to chose. It's the song I know least being the most recently written and I wasn't involved in the video, and it has a lovely jazz feel.

So, without Jennifer Crook in my life, I almost certainly would remember 2016 as being the year that David Bowie, Leonard Cohen, Keith Emmerson, Greg Lake and Carrie Fisher died, the year we voted for Brexit and the year Trump was elected. In short, I would think of 2016 as being a pretty bad year, but instead, I’ll remember it as being one of the best. With the imminent arrival of President Trump, can you afford the risk of not letting Jennifer in to your life? Can you afford the risk of not buying “The Year, She Turns”? If in December 2017 you are bemoaning what a dreadful year it has been, and you didn’t buy this album, you only have yourselves to blame.