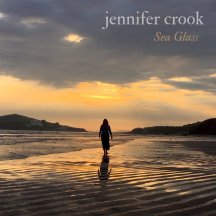 
Sometimes it is quite hard to write a review of a single. Four minutes and eleven seconds (say) of some music and some singing. Once you've said all that, what else is there left to say?

With "Sea Glass", I have the opposite problem. I have so much I want to say about this beautiful track, that I don't know where to begin. Firstly, it is partly the beauty of this song, partly the story behind it, and probably, partly the times in which we are living, but I can't listen to this piece of music without finding tears in my eyes. It is so moving, I probably will never be able to listen to it without crying.

Secondly, it is about time. The last think that I know that Jennifer Crook recorded was her "The Year She Turns" album, with each track written, performed and recorded one a month throughout 2016. For an ardent fan, it has been an eternity.

"Sea Glass" features Jennifer herself on lead vocals and harp, Rob Brian on drums, Stuart Bruce on acoustic bass, bowed guitar, bowed mandolin, harmonium, backing vocals, and percussion, along with her old friend Maclaine Colston on hammered dulcimer. Maclaine played on her first two albums, accompanied her duo Cythara, was a member of 'Jennifer Crook and the Hawthorns' and Jennifer, Maclaine and fellow Hawthorn Beth Porter have recently formed the supergroup 'Winter Wonderband'. Rob Brian is known for drumming with Siouxsie Sioux, Peter Gabriel and Loreena McKennitt. Stuart Bruce, Jennifer's other half, is famous for mixing the Band Aid single, "Do They Know It's Christmas?". "Do They Know It's Xmas" was recorded on November 25th 1984. Stuart worked through the night to be able to get a tape to Geldoff to play on Radio 1's Breakfast Show the following morning. He was nominated for Best Recording Engineer in 1997 for his work with Loreena McKennit.

The cast of this track is truly stellar. The combination of the instruments, particularly harp, hammered dulcimer and bass, is exquisite.

"Sea Glass", although composed by Jennifer, was not written with the intention of being sung by her. She wrote it for her friend, Miranda Sykes, one of the guest artists on Jennifer's "The Year She Turns" project. The song features on Miranda's 2017 album "Borrowed Places". Jennifer recently went to see Show Of Hands, and was treated to a performance of the song. Miranda had just lost a friend to cancer, and had been unable to attend the funeral, so had written a message in a bottle and thrown in out to sea. Sadly, the bottle and message was returned to her a week later, with a note scolding her about polluting the ocean.

The song is so deeply poignant now at this time of corona virus. So many families are faced with loved ones who are dying alone and are unable to visit them in hospital, or to attend their funerals. Most of us would even be unable to cast a message to our departed loved ones out to sea, but if we could, we'd know that although the act may seem like pollution to some, as the waves and tides smooth the broken glass, the resultant sea glass formed is a thing of beauty.

Tragically, to make the song even more heartwrenching, as most fans of Show Of Hands will know, Miranda has now, sadly found herself suffering from breast cancer. A truly dreadful time to be afflicted by anything that requires hospital appointments and weakens your immune system. Jennifer has therefore released this single as a means of raising money for Miranda. The single can be downloaded from Jennifer's website for nothing, though you can make a donation to the artists if you want. You're also invited, if you can, to make a donation to support Miranda. Donations can be made at Donate to help Miranda here.