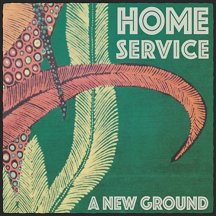 
Must confess that somehow I seem to have managed to have never encountered Home Service before, which is a feat that I don't understand how I managed to achieve. There are several links between this band and so many others that I know, that it seems impossible to have got through like without ever having heard of them. I've even seen three of their members playing live before in other bands.

I have to confess though, that when I was first asked to review an album by a group called "Home Service", my first thought was – What a silly name for a band to choose. Surely they'd realise that anyone trying to google their name would first be directed to websites on the subject of gas boilers, electrical appliances, early radio stations, and possibly even visiting masseuses. I hadn't realised that Home Service had been a band long before the existence of Google or the internet.

Ashley Hutchings was a founder member of Fairport Convention, and left to form Steeleye Span. On leaving Steeleye he formed a band called The Albion Band. The Albion Band had a fairly large membership and was quite fluid, and at one time, several members, without Ashley formed a splinter group called "The First Eleven". Because of the quintessentially British sounding name "Albion", they sought out a new name with equal British connotations, and chose "Home Service" after the BBC Radio station that became Radio 4.

In the 1980's they released three albums, but the members gradually drifted away to other projects, and by 1986 the band was no more. They reunited briefly back in the 1990s and produced a live album, but in 2011 some previously unreleased live recordings came to light, prompting a further reunion, and "A New Ground" is the first album from the current line-up.

The arrival of Howard Evans, a trumpeter player, in the Albion Band caused the other members to develop a liking of brass instruments and that has stayed with them through to Home Service. As well as the more customary guitars, bass, percussion, keyboard and accordion, the album also features flute, piccolo, fife, soprano sax, tenor sax, trumpet, flugel horn, trombones and tuba.

Home Service's roots are very definitely folk, but with such a large brass section their sound, at times, has a strong jazz feel, and always feels majestic. The band members include Graeme Taylor (guitar) and Rory MacFarlane (bass) who are both members of Gryphon, a band that has been classed as everything from prog, rock, folk, jazz and classical, and not surprisingly Home Service sound at times quite similar to Gryphon.

Back in the 1980's the band wrote fairly political songs with a strong anti-Thatcherite theme, and that ethos is still strongly present on "A New Ground". I must say though that the political themes don't always seem to follow the route that I would have expected. For example, "The Last Tommy" was inspired by Harry Patch, who when he died at the age of 111, was the last British soldier who had fought in the first word war. A life definitely worth celebrating in song. To me though, I'm slightly confused that the lyrics say: 'If anyone should ask me what the fighting was all for I'll say "I'm free"'. In other words, it seems to be an anti-war song that justifies the fighting. I'm a little puzzled.

As you might expect from an anti-Thatcherite group there are two songs relating to mining. The first, Kellingley, was inspired by the closure of the UK's last deep mining pit, but rather than protesting about the closure, the song highlights how dangerous the work was and celebrates the miners as heroes. All very true, but there's a sort of sense that because the work was so dangerous it was actually a good thing to close the mine, which I'm sure was not the intention of the song.

And if closing deep mines is OK due to the danger, you'd have thought that open cast mining would be something to celebrate, but "Dirt, Dust, Lorries and Noise" rejoices in the fact that local protests against British Coal succeeded in preventing them from opening an open cast mine in Stoke-On-Trent.

But despite my confusion in the politics, these are really good songs. Full of tremendous energy. Love "Wallbreaker", a riddle-me-re song (similar to the riddle game that Bilbo and Gollum played in 'The Hobbit'), personifying water. Love "Papa Joe's Polka", a traditional instrumental. As a kid I worked in one of the very first pizza restaurant in the country called 'Papa Joe's'. The owner ran a jazz band (called Papa Joe's All Stars) which would play in the bar occasionally. Never really got to see the band as I was working in the kitchen, and I never understood where the name came from, so I'd like to think that they played this tune and named themselves and the restaurant after it.

My favourite track, though, has to be the title track, "A New Ground". The tune is based on Henry Purcell's "Here The Deities Approve", the lyrics – afraid I couldn't offer an explanation – they could be about colonizing Mars, they could be about life in the UK post Brexit. Graeme Taylor's guitar riff though is to die for.