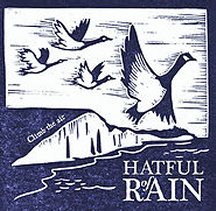 
Hatful of Rain are a fascinating band to see live. They have just one central microphone, but Chloe Overton, Phil Jones and Fred Gregory all take turns in lead vocals and provide harmonies for eachother so cluster round the microphone in ever changing positions. Not only that but Chloe and Fred are constantly interchanging and swapping guitars and mandolins, so the stage is filled with activity. Of course, on record none of that comes across, but they have still managed to produce two awesome albums, primarily because they write such good songs. (If you have not yet heard them, do yourself a favour and search out "Scarlet Ribbon" on youtube). Must confess, therefore, that I was a bit concerned when I found out that Hatful were producing an EP of songs that they didn't write.

If "Way Up On The Hill" and "The Morning Key" were so good because they wrote the songs, then there was a possibility that "Climb The Air" might not live up to my expectations. Of course, I need not have worried. Their EP is another gem.

Not only are the songs beautiful and well performed, but the EP is actually quite educational. Their music is influenced, they say, by a variety of genres, from English, Celtic and American roots. They therefore decided to produce an EP with some of the material that has shaped them and made them into what they are today. They have included the history of these songs in their sleeve notes, which I must confess, I found fascinating. Some of their current material has a bluegrass Appalachian feel about it, so I would have put money on at least one of these songs having been originally collected by Cecil Sharp, but I would have lost that bet.

Sir Isaac Newton famously said "If I have seen further it is by standing on the shoulders of giants." It is possible that this was intended as an insult, as he said it to Robert Hooke who was slight in stature, but it is often interpreted as Newton recognising that his achievements were due to the achievements of those who had gone before him. This is exactly what Hatful of Rain are doing with this EP. They are not claiming credit for the wonderful songs that they have written, but are transferring the honour back to musicians of the past. It makes me love them even more.

I think that there is a secret in-joke in this EP with a dig at their violinst James Shenton. He once heard a fellow violinist play a piece of music at a club, and worked out how to play it by ear. Then over the years, never having heard anyone else ever playing the tune, he gradually started to wonder whether he had actually written it himself. The other band members then came across the tune on youtube, and found that not only had James not written it, it was actually two tunes: "Frenchie's Reel" and "Mitten's Breakdown". I think that they've included this track on an EP of songs that they didn't write, just to tease James. That said, it is a virtuoso performance and highlights what a talented violinst he is.

My favourite track on the EP is "False False". It was collected by Ewan McColl and Peggy Seeger and first published in their book "Traveller Songs From England and Scotland". Listening to this track, you can clearly hear the threads that tie this track to some of Chloe's compositions such as "Evangaline", or "The Exit Song".

And just in caase you didn't think the band talented enough, they've formed their own record label, produced the EP themselves and the cover art is a linocut by Philip Kingsbury, based on an original design by Chloe.