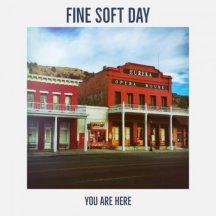 
Back in the 1970's, there was a concerted effort from punk rock musicians to eradicate progressive rock, and they nearly succeeded. Their argument seemed to be that prog was too elitist, requiring great musicianship to be able to play and therefore unfairly discriminating against those with no musical abilities. It was an argument that I didn't buy in to. After all, no one argued that we shouldn't have such things as good books because that discriminated against the iliterate, or that well acted TV programmes or films should be discouraged as they might offend those unable to act.

Happy to say that prog rock is still very much alive, but even now, when reviewing an album, one still feels slightly nervous of mentioning the word "prog" in case it puts people off. This is definitely not an album to be put off from. I think even the hardened anti-prog brigade would adore "You Are Here". The music is really stunning and although this is a concept album, the concept is of secondary importance to the songs.

Manchester based Fine Soft Day were formed in 1996, as a folk/Celtic rock band, and released an eponymously entitled album in 1998. The band never officially broke up, but life, families and work all got in the way and they drifted apart, until Summer 2018 when Martin Hanbury contacted Mark Sweeney and Jeff Gascoyne with the idea of reforming the band. They realised that much as they liked folk, and much as they liked Celtic rock, all three of them were prog rock fans, so the new album took on a new direction.

I suspect that the album title, "You Are Here" is an homage to Pink Floyd's album "Wish You Were Here". The text 'You Are Here' is often seen on maps, and if you are trying to get to a particular location it is hugely helpful to know where you are starting from. At that instant, when you are standing in front of the map, 'You Are Here' is actually true. You are precisely where the map says that you are. Trouble is, five minutes later when you are well on the way on your journey the map still says 'You Are Here'. But you're not. You are somewhere else. The map only deals with spatial co-ordinates and makes no attempt to cover chronological co-ordinates. And that, I think, is basically the concept behind this concept album. It is a four dimensional map.

There are various themes, both musically and lyrically that weave through the songs on this album, but don't worry, each song stands in its own right.

The first time I listened to "River", the first track on the album, I thought it felt like coda. The way the song built up, and the way the lyrics seemed to pull together various disparate threads, it felt like it was providing a conclusion to an album rather than the beginning. However, on listening to "Reason", the second song on the album, I thought that it would make a wonderful last song to a live gig. The sort of song that would energise an audience and make them demand an encore. The third track, an instrumental called "Journey To Hear", struck me as being a perfect encore to a live performance. Such an upbeat tune, if it didn't push the audience into a standing ovation then nothing would. In fact every track on this album is anthemic and they are all so powerful that any other band would save them to the last of their live set to ensure that the audience went home on a high with that tune ringing round their head.

The river from the first track is the scene where this four dimensional map unfolds, but it is far more than that. Like time the river is ever flowing, so the river serves as a metaphor for the fourth dimension. The stones on the river bed are smoothed by the flow of water and the constant interactions with their neighbouring stones, just as our human characteristics are shaped by the flow of time and our interactions with eachother. The water in the river has a cycle of evaporation through rain back to the river again, another metaphor, but this time for the cycle of life through birth and death.

The album is about two people, both living in the same place, but at different times, though they can sense the existence of each other. I think there is much more to it than that, and each time you listen to it you learn a bit more, but there are many threads in this tapestry that I haven't yet unravelled and worked out the significance. For instance, "Five Songs" refer to five songs that seem to control the weather. I wondered if the river was flowing through an Indian reservation, back when Native Americans may have attempted to call for rain with a rain dance, but as one of the songs brings snow, I'm not so sure.

There are three instrumentals on the album as well, which are clearly quite tricky to bring in to a narrative. "Journey To Hear" remninds me very much of one of my favourite prog bands, Van der Graaf Generator. Please don't let that put you off. I'll explain. If you know VdGG you'll know that most of their songs are written by Peter Hammill, who, let's face it, does produce some very angst filled material. Very infrequently though, the rest of the band would find themsleves in the recording studio without their gloom-meister, and would delight in recording some gloriously cheerful instrumentals. "Journey To Hear" is such a tune.

"Dance Of The Little Lights From Nowhere" betrays their celtic rock origins, as there is an underlying jig feel to this instrumental. Again, not sure what the little lights are, and how they fit into the story, but darkness is another recurring theme, so I suspect that the little lights are the 'stars' you sometimes see when you close your eyes.

Like many a prog rock album, this one does have a twenty minute marathon of a song, "Roll Up The World", but as amelioration to the non-prog fans in the audience, the song is split into two tracks, separated by several other songs, so again, if the epic length of some prog puts you off Genesis, Yes, Floyd, VdGG, Tull, etc don't feel threatened by "You Are Here". This is prog for all.

"Roll Up The World Part 1", is the third of the instrumentals, and sounds very much in the style of a band called Camel. The guitar could easily have been played by Andy Latimer. Throughout the album there are little homages to other prog greats, particularly the opening acoustic guitar of "Grandfather" which sounds as if it was played by Steve Howe from Yes.

Very hard to decide which track is my favourite as they are all of such extraordinary high standard, but if pressed I think I would have to say "Time Rolls By" is probably the best. It has a very heavy guitar theme running through it, so much so that after four minutes and sixteen seconds, when it ends, you realise that you'd not inhaled throughout. Thank Heavens that this track doesn't last for twenty minutes. Otherwise we'd all be seeing those little lights from nowhere!

Roll Up The World Part 1