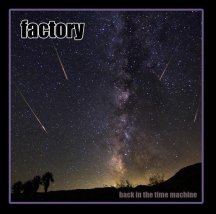 
I am holding a CD by a band called Factory! That might not mean a lot to many people, but believe me, I would be less excited if I were holding the Holy Grail. And for many years, the Holy Grail would have seemed far more accessible.

I think it was God or Pope Damasus the first or the Emperor Constantine or someone who once said "in principio creavit Deus caelum et terram." (In the beginning God created the Heavens and the Earth) and I think it was Julie Andrews who said "Let's start at the very beginning."

It was Friday, June the 8th, 1973 and I was a young sixteen year old, clutching a ticket to see Suzi Quatro who was playing at Hastings Pier. I have to admit that it was teenage lust for a leather-clad siren rather than musical appreciation that had led to me going to see my first ever live gig. If it hadn't been for the support act, it could have been my last. Yes, I did enjoy Suzi Q, but I think I was more fascinated with her costume than with her music. The support act though was a local Hastings band called Factory and they changed my life. Prior to them I enjoyed music, mainly recorded on cassette tape recorded from Alan Freeman's radio show, but when Factory started to play, I realised that live music compared to audio tape, is like a real ale compared to Watneys Red Barrel.

I saw Factory a few times in the seventies, and it was all a long time ago, so my memory may not be as clear as I would like, but I am fairly sure they played a song called "The Baby", which was basically a low frequency bass heartbeat, blasted at the audience almost sub-aurally, so that rather than our ear drums, our internal organs vibrated, so it physically felt as if the heartbeat was a life growing inside us. This was something that clearly was impossible to emulate on tape, on radio or on Top Of The Pops. I was sold on live music, and have been ever since. I think also, that Factory was the first time I had seen long hair on a male before, (it was a sheltered upbringing in Sussex), and I was so impressed I've sported long hair ever since. Now I'm not saying that I would still be a sixteen year old student with short back and sides if it hadn't been for Factory, but I guess I could have been a very different person to who I am now.

Factory did release a limited edition single back in the 70's ("Time Machine" on the A side and "Castle on the Hill" on the B side) and a copy of it was recently sold for £400, but they did not actually release an album at the time, though they did tour extensively throughout Europe, so it is quite possible that others will remember them. In 1976 the media became obsessed with punk, and it became increasingly difficult to garner interest in anything else, so they disbanded and went their separate ways. Andy Qunta, (keyboard, 12 string, percussion and vocals), joined Hazel O'Connor's band, then Cockney Rebel, and worked with Manfred Mann's Earth Band. His brother, Tony (guitars, violin and vocals) also worked with Hazel O'Connor, with Odyssey, with Shiela Ferguson from the Three Degrees, and with several West End theatre productions. Jaffa Peckham (bass, accordion and vocals), has played in a wide variety of bands in a wide variety of genres (prog, C&W, jazz, folk, blues, Americana), playing a wide variety of instruments, including cello, bassoon, euphonium, crumhorn and recorders. Laurie Cooksey (drums and vocals) formed a band called Die Laughing which mutated into a sixties band called The 6Ts, which is still going strong. Jaffa left the band in 1974 and was replaced on bass by Steve Kinch, (currently still playing with Manfred Mann's Earth Band"), who joins the original four on this album with additional backing vocals.

In 2015 they met up in France, reformed, rehearsed, and returned to Hastings to record this album of many of their songs from the 70's. Andy now lives in the US, so gigs are rare, but the remaining three have decided to continue as a trio, and call themselves Factrio.

Back in the 70's there was a couple of occassions when the band could have made the big time. After the Suzi Quatro gig her producer, Mickie Most, told them he was really impressed and suggested that they contact him, but they turned him down, not wishing to sell out and become a pop band. Roger Daltrey was also very impressed with them, and after building his own recording studio he gave them free rein of the facilities, and they were able to record most of their material. The resulting material was never released, but came in very useful in refreshing their memories during rehearsals. There's a dedication to Daltrey on the album for his support.

Because of their single, "The Time Machine" and because of the many years that have passed since these songs were written there could not be a more appropriate title for this album than "Back To The Time Machine". The album starts with a short track (less than two minutes) called "Back . . ." and ends, of course, with their hard rocking "Time Machine". "Back . . ." starts with some ambient noise (to indicate time travel), followed by the sound of scratched vinyl to indicate arrival in the 1970's, followed by a very Black Sabbath sounding guitar riff (actually sampled from the original recording of "Time Machine".

With five vocalists, there are some excellent harmonics on this album, and some fantastic lead vocals. The vocals (Tony) on "Call Of The Wild", the second track, are stunning, and very reminiscent of the late David Byron, the Uriah Heep vocalist during their "Demons and Wizards"/"Magician's Birthday" era. Factory cover a variety of different styles, primarily rock, but "I'll Sing You A Song" has a traditional Irish Folk Rock song feel about it. "Lol's Jig", as its name suggests, is a barn-dancing stomper, "Castle On The Hill" has a 1960's psychedelic feel about it and could have been penned by Syd Barrett, "As The Crow Flies", (originally written as a song they could do live to fill in if Tony broke a string), is a simple folk love song, and "Amulci" (a song about an Egyptian rat catcher) and "Am I Dreaming, Am I Mad" could best be described as prog rock.

"Castle On The Hill", inspired by the view from Hastings castle on the cliff tops, took them eighteen minutes to write in 1970, and comprised just two verses. Forty-five years later thay have added a third verse, so claim that the song took forty-five years and eighteen minutes to write. There are a good few other tracks that they used to play, including "The Baby", that haven't made it to this album, so I think that there is easily scope for a second album, but let's hope they don't make us wait another forty-five years.

The songs, their playing, and their voices have all survived the time travel perfectly. Unfortunately, the bass guitar is the only one of their original instruments that has survived. If you weren't lucky enough to catch them first time round then all you need is a time machine, and luckily enough, I have one right here in my hand.

Angel From The Sky