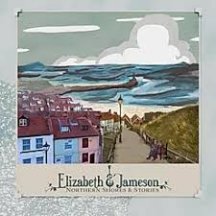 
I first encountered Hannah Elizabeth when I saw the supergroup The Company of Players. The company was formed by Jess Distill from Said The Maiden, and included all three of the Maidens, including Hannah. About a year later violinist Hannah left the Maidens to form a duo with her partner, Griff Jameson. Griff came from a rock band called Fred's House, which I have to admit hadn't previously crossed my radar.

Not sure quite how and when Griff and Hannah first met but a 2015 video of Fred's House song "Shut Up And Dance" features both Hannah and fellow Maiden Kathy Pilkington amongst the dancers. Hannah and Griff began writing music together, and eventually became engaged, so decided that it was time they combined their talents as a duo.

Said The Maiden are famed for their three part harmonies. Although a rock group, Fred's House also were known for their harmonies, as they featured both Griff and Vikki Gavin on vocals. It is therefore no surprise that "Northern Shores and Stories" is rich with harmonies.

Griff describes the coming together of Hannah's folk roots and his rock roots as meeting somewhere in the middle - around Fleetwood Mac.

Prior to this, their first studio album, they have released a live CD, now sadly sold out, two EPs, and a limited release promotional single called "Endeavour" used to self fund the production of this album. The single comprised four tracks, the studio version of "Endeavour", as featured on the new album, along with a live version, plus live versions of "Picture" and "How Long Has It Been?", studio versions of which feature on "Northern Shores and Stories".

They describe "Northern Shores and Stories" as a concept album, and students of history who recognise the name Endeavour may assume from the title of the album that the songs will be maritime based, but that isn't the case. In fact, the songs were all inspired by visits to the resort of Whitby, and the inspiration came from a wide variety of sources there, such as posters in shop windows, exhibits in museums or galleries, local newspaper headlines, gravestones, residents, etc. So yes, there is a concept behind the album, but it is very loose and not at all obtrusive.

With their two voices, Griff's acoustic and Hannah's violin, they make a brilliant sound as you'll hear if you go and see them live. However, on record, they are joined by Claire Bostock on cello, Dave Sutherland on double bass, their producer, Stephen MacLachlan on various keyboards, including harpsichord and celeste, and peercussion, and even Griff's brother, Gafyn, from Fred's House, on piano and backing vocals. With the violin cello and double bass, the album sounds fully orchestrated at times. Superb.

One of Whitby's most famous claims to fame is that Bram Stoker stayed there on holiday. Whilst researching there he encountered the name Dracula in the Whitby library, a 15th century prince also known as Vlad Tepes, who impaled his enemies on stakes. He also heard about a Russian ship caleld the Dmitry that been shipwrecked there five years erlier. It inspired him to write Dracula, in which Dracula is placed on board a Russian Ship, the Demeter, which was wrecked after Dracula killed the crew, allowing Dracula to arrive on shore at Whitby. The story inspired Griff and Hannah to write "I Will Wait".

Whitby is also famous as the birthplace of Captain Cook's ship HMS Endeavour. It is now home to the Captain Cook Memorial Museum. Their song "Endeavour" is not about Captain Cook, nor the vessel, however. In the museum, Griff and Hannah found a series of letters written by Cook's wife, Elizabeth, written to Lord Sandwich, begging for financial assistance after James Cook failed to return from a voyage (Cook was killed in Hawaii). Incidentally, and possibly co-incidentally, HMS Endeavour was subsequently renamed as Lord Sandwich,

Another famous Whitby resident inspired "Picture". Photographer Francis Meadow Sutcliffe was born in Leeds, and began his career in Tunbridge Wells in Kent, but spent the majority of his life working in Whitby. His most famous photograph, Water Rats, was of some naked children playing in a boat. The photo caused him to be ex-communicated by the Church, but a copy of it was purchased by the then Prince of Wales, Edward VII.

Griff and Hannah wrote "Dance In The Shadows" after finding a grave in the Cemetry of St Mary's Church in Whitby. In the grave were the bodies of a married couple, both born on the same day, September the 19th 1600. Childhood sweathearts, they were married on their joint birthday, and died within hours of eachother, on their eightieth birthday. The song begins with the sound of church bells, almost certainly recorded from the church there, and is played as a waltz.

They wanted to capture the sounds of Whitby on the record, so as well as the church bells, "Bottomless Beer" is accompanied by sounds recorded in a bar, "Black Amber", the most esoteric track on the album, starts and ends with the sounds of waves and of seagulls, and "How Long Has It Been?" ends with sounds recorded in a cafe. To prevent the locals from knowing that they were being recorded in the cafe, they hid the microphone behind a local newspaper, The Whitby Gazette, in which they read an article entitled 'How long has it been since you wrote a letter?' from which "How Long Has It Been?" was born.

With these sound effects, there is a definite flavour of "Dark Side Of The Moon" about "Northern Shores and Stories", but Griff and Hannah take Pink Floyd to new levels with "Bet and Terry". It is basically an instrumental track accompanying an interview with the grandmother of a friend of theirs, who met her husband in Whitby a lifetime ago. Listen with dry eyes and you are not human.

My favourite track though on the album though was written after Griff and Hannah noticed many 'Missing' posters in windows round the town. They then visited a World War II themed pie shop which plays 78's. Whilst they were there the record on the phonograph was by the Andrews Sisters. The Andrew Sisters and the posters combined to inspire "Someone's Missing Someone".

Although these songs were all written because of their trips to Whitby, they cover topics such as love and loss and are universal. They could have been written about any town, or about you or me.

So, if your tastes lie anywhere between folk, rock, classical, Fleetwood Mac, the Andrews Sisters or Pink Floyd, or if you just like brilliant music, I cannot recommend "Northern Shores and Stories" highly enough.