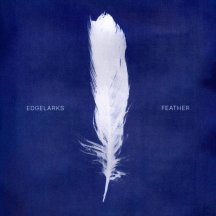 
In the interests of road safety, I should first give a health advisory notice - it probably isn't a good idea to listen to this beautiful album whilst driving. It is wonderfully soporific. The music is constructed to pour from your speakers and hang in the air around you like steam from a cup of bedtime cocoa. The vocals envelop you like a hand crocheted cashmere blanket. The album is warm and relaxing and makes you feel safe and amongst friends.

So this album might not be a good idea to drive to, but it would be ideal to be prescribed on the National Health as relief for stress. And let's face it. In these days of Trump and Brexit, who doesn't need something to relief stress.

Phillip Henry has an amazing voice. He sings in a register normally the reserve of angels and Tolkein elves. On any other album by any other artist you would almost certainly think that his voice was one of the finest that you've heard. On any other album by any other artist, possibly. I'm sure Philip would be the first to admit, however, that his vocal talents fade into second place when compared with Hannah Martin's incredible voice. Her voice is deeply rich in harmonics and she seems to have complete control over them. At times she sounds exactly like Karen Carpenter, but unlike Karen, her voice is so much more flexible.

"Feather" is Phillip and Hannah's fifth studio album, and the second since they rebranded themselves as Edgelarks. Unlike their other albums, they have tried to recreate their live sound here. There are no overdubs and no added percussion. They are both multi-instrumentalists, with a variety of instruments at their disposal, so the lack of overdubs still leaves "Feather" with a very full sound.

Aware that they hadn't written anything for a while because of their extensive touring, they decided that they needed to shut themselves away in isolation so that they could concentrate on new material. They were lucky enough to be given access for a week in a cottage in the Cumbrian Lakes, in April 2018. They very quickly realised that with such stunning scenery, and such a generous act of kindness that there was no way that they could write sad songs. This was going to be an album of rejoicing.

Six of the tracks were written by Hannah, four by Hannah and Phil, with one traditional song: "Spencer The Rover".

Inside most of us there is a four year old who becomes excited when we discover a feather. The adult in us tries to tell us that it is just a feather, but our inner child knows that it is a treasure worth keeping. Who knows? If we collect enough of these treasures maybe we'll be able to fly? The title track of this album is about the reawakening of Hannah's inner child when she discovered such a feather inside a stone circle in Dorset. If we all found such delight in such simple things, just think how beautiful this world could be.

The theme of treasures in nature is continued with "Oyster". The oyster's pearl is recognised by all as valuable, but nature provides so many other treasures, not necessarily considered as valuable - the song of a lark - a rainbow - even a walk in the rain. The vocal duet at the end of this song is mesmerising. Sadly far too short. If that had extended for the whole album I'd have still thought it too short.

"Here I Stand" is the first of a couple of songs on the theme of immigration and settling down to form new roots in a strange land. It was inspired by a medieval stone in Devon, carved by an immigrant father and his son. The father came from Ireland, and wrote, using an old runic alphabet known as Ogham. The son, presumably no longer thinking of himself as Irish, carved his inscription in Latin. Hannah's lyrics deliberately include the line 'The wind rushes through their lives', to remind us of the Windrush generation, and that immigration, as old as the human race itself, is still happening today.

"Wander" continues the theme of immigration. Plants cast their seeds to the winds, to settle where they land. If we too get cast to the winds and end up growing elsewhere, our descendants lose the language, lose the accents and lose the stories and culture. We shouldn't be judged by our accents, but by our toil.

"Time Away", as its title suggests is about the importance of taking a break from civilisation and getting away from it all, and you couldn't ask for better evidence as to how important that is than this album. Similarly, "Wanting Nothing" is about that rare feeling of total contentment you get from, say, taking time away in the Cumbrian Lakes.

I am quite excited that I am going to be able to see Edgelarks on their current tour, as I have not yet seen them before. I have seen Hannah live as she was part of Shake The Chains, and I have seen the two of them as part of Peter Knight's Gigspanner Big Band, but to date I haven't seen them as a duo. When I saw them at Cropredy as part of the Gigspanner Big band, they did perform a couple of solo numbers, and there are two tracks on this album that I feel that I have heard before, so I guess it is possible that they played them at Cropredy. If they didn't, then either I'm suffering from some weird form of dementia, or there is something so powerful about these tracks that they can form neural links in your brain to create false memories.

"Growing" is one such track. I'm sure they must have played it at Cropredy, but as it follows the true story of a lost wedding ring found years later wrapped round a carrot harvested from the garden, it is possible that the song has awoken a memory of the news story, and confused me.

I can recall, or at least think I can recall, wondering whether "Things We Save From The Tide" was a song celebrating land reclamation (such as Holland or Romney Marsh in Kent), or whether it was about the way that even after a disaster, such as a tsunami, life goes on. In actual fact the song is about neither. It is about beachcombing, and, like "Feather", is about finding beauty and excitement in all that lays around us.

If you like your folk music to be sad and depressing, with a high death count, then this album might be a bit of a shock to you. To everyone else, once you start listening to this, you are going to have problems stopping. Brexit? No problems. My stress has gone.