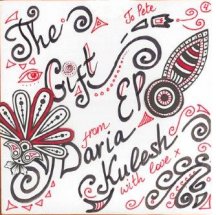 
I must have something like a thousand CDs on my shelf, but this is the first where the artist personally hand drew the cover specifically for me, to create a totally original work of art. In a way, this EP is so unique that it almost seemed recklessly criminal to listen to it. Something so unique is irreplaceable, and is therefore far more valuable than almost any of the others I own.

But of course, being recklessly criminal, I have to report that I have listened to it, and, as expected, it is lovely.

Only 50 copies of the EP were printed, and were available via Pledgemusic to fund Daria's second solo album. All four songs on this EP will be available on the full CD when it is released, because, happilly, the pledge reached its target.

Unlike her first solo album, which covered a variety of subjects, all four of these songs have a definite Russian theme, and three of the songs relate directly to Daria's ancestors. Having been lucky enough to see her perform live, I had heard all four songs before, but that doesn't make them any less beautiful. Daria is joined by a variety of musicians, including the multi-instrumentalist Jonny Dyer, who accompanies her on all of the tracks, her fellow band member Kate Rouse plays hammered dulcimer and backing vocals on "The Moon And The Pilot", Jimur Dzeytov, from the Republic of Ingushetia, (in the North Caucasus region) plays an instrument called a dakhchan pandar on "Safely Wed", Jonny's partner Vicki Swan plays her signature instrument the nyckelharpa on the track "Amanat", and Jason Emberton plays percussion and mellotron on "Tamara" which also features Daria herself playing her Shruti box. I doubt if there is another EP anywhere that features such a wide range of instruments.

The first song on the EP, "Tamara" is the only song not directly related to Daria's family history. Tamara is an ancient legend about an evil princess who lived in a tower in the Caucasus who lured men to their deaths, along similar lines to the Greek mythological Sirens. The Russian poet Mikhail Lermontov wrote a ballad about Tamara inspiring a symphony by Russian composer Mily Balakirev. Dara is beginning to form a tradition of converting Russian myths adapted by a composer in to modern folk music, as Kara's song "Mermaid's Lullaby" was based on the Russian legend of Sadko, previously made into an opera by Rimsky-Korsakov.

Russia complained about the Ukraine entry, "1944" by Jumala, because it was political, as it recounted Stalin's ethnic deportation of 240,000 Tartars from the Crimea. This was not Stalin's only atrocity as evidenced by Daria's second track, "The Moon And The Pilot". The pilot was Daria's great grandfather, a second world war pilot, shot down in 1942, but not discovered until 1944 when he was posthumously declared a war hero as he was attempting to fly food to those starving in Leningrad. The "Moon" was Daria's great grandmother, so named because of her beauty. At the same time as the pilot was declared a war hero, Stalin declared that the entire Ingush and Chechyna nations were traitors supporting Hitler and so they too were subjected to a forced deportation. I actually liked the Ukraine Eurovision entry, but Daria's song is far more beautiful. Maybe we should consider her for our 2017 entry?

"Safely Wed" tells the tale of another of Daria's relatives. She was forced into an arrangement marriage, but eventually fled. She then fell in love with someone else that the family considered to be an unsuitable partner. Daria's grandmother's grandmother then managed to pursuade the rest of the family that what they had considered suitable turned out to be an unhappy marriage, so maybe, what they considered unsuitable would be happy. The family was won over, and the marriage allowed to go ahead.

The title of the EP, "The Gift", comes from the meaning of the strangely named fourth track "Amanat". I first encountered this word back in the 1980's as it appears in Michael Moorcock's novel "Byzantium Endures", which is a fictional account of someone living through the disorder that gripped Russia after the fall of the Romanovs. The Amanat is a minor character in the novel, but in all of the chaos his opinion seems to be the only one that people trust. I had assumed that it was a title, bestowed on a rank of office, similar to a Mayor. It as actually an Urdu word meaning something that is expensive and precious to its possessor given to someone else to keep it safe. It was a custom amongst the Russians to foster Ingush boys to ensure their blood families' compliance and submission and to "enlighten" them and raise with Russian values. Daria's grandmother's Grandfather was one such person, dragged from his family as a child to be brought up in another country by strangers.

If these four tracks are representative of her forthcoming album, "Long Lost Home", due to be released on the 23rd February 2017, it should be a definite contender for the best album of 2017.