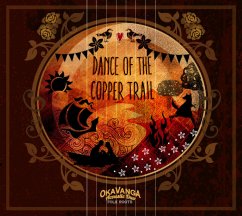 
So what do you do if your first album is perfect? Years of disappointment, struggling to produce another album that recaptures that original sound? You’ll have to admit if you’ve heard it that Oka Vanga’s first album, "Pilgrim", which was voted best instrumental album of 2014 by no less an illustrious body than Fatea, was, indeed, perfect.

The solution to the problem found by Angela Meyer and Will Cox, was to re-invent themselves, and to redefine the word "perfect". No longer an instrumental duo, they produced an EP, "Tales Of Eyam", which was even more perfect than "Pilgrim". Seemingly from nowhere, Angela discovered she had an extraordinarily beautiful voice. Folk music often has a high body count, but as "Tales Of Eyam" was a concept EP about the plague, it trumped almost every other folk song. Despite that though, it was a love story and was hugely upbeat and uplifting.

So what do you do if your first album is perfect, and your follow up EP is even more perfect? Oka Vanga again had the answer and again re-invented themselves and again redefined the word "perfect".

Not only has Angela found her voice, but Will now plays a mandolin and a ukulele as well as the guitar. They now tour mainly as a trio, joined by Oliver Copeland, a student of theirs, who plays double bass, and on this album they are joined by Mark Tucker on drums and percussion, and Patsy Reid on violin. Patsy was nominated for musician of the year 2015 by Spiral Earth, her album "The Brightest Path" was nominated as album of the year in the Scots Trad Music Awards. She was involved with the Sweet Liberties project along with musicians like Nancy Kerr, Maz O’Connor, Martyn Joseph and Sam Carter, so she is a brilliant musician in her own right.

Oka Vanga have evolved from an instrumental duo to a five piece band.

Unlikely "Tales Of Eyam", this is not a concept album, but many of the songs have a white magic feel, and the Devil gets a few mentions in several tracks. Angela describes it as ‘a metaphor for survival’ and ‘a musical allegory weaving together songs based on faith, superstition, love, death and everlasting hope.’ If that’s another way of saying that this is a brilliant feel-good album, I agree.

I’ve heard several of these songs played live by Ange and Will as a duo. Haven’t yet had the pleasure of seeing them with Oliver, but there must have been a temptation when scoring the bass, percussion and violin to leave these as mainly guitar based songs, with the additional instruments merely adding background colour, but that isn’t what Angela has done. She has rewritten the music so that often the bass or violin take the lead. "Ashes To The Wind" starts with just the rhythm section, the violin joins in about a third of the way through, and the guitar parts join in as a crescendo at the end, and the violin riff that runs through "Rose Of The Hill" is heartbreakingly beautiful.

There are two tracks on this album that are traditional songs. The rest were all written by Angela apart from "Don’t Let The Clouds Roll In" which is credited to both Angela and Will. The gospel song, "This Train" was originally made famous in the 1930’s by Sister Rosetta Tharpe, and their recent single "She Moved Through The Fair", sung at least as well as the Sandy Denny version, are traditional but arranged by Angela.

The opening track on the album, "The Wicken Tree", sounds and feels like it was a traditional folk song, perhaps a Child Ballad, but it was inspired by a Rowan Tree in their back garden. I will put money on it that in a few years’ time artists in folk clubs up and down the country are covering this song, unaware that it doesn’t date back to a time when superstitious people might have believed that the berries of the rowan were blood red because the devil hung his mother in such a tree.

After the high body count on their EP, they have relented. "Rose On The Hill", unlike almost every folk song of that genre, tells of a young girl who falls in love with a sailor, who set sail for two years and a day, and didn’t actually drown.

An Oka Vanga instrumental is like a painting. Somehow they manage to infuse colour and perspective and depth into their music. Really glad that they have not completely abandoned this art-form on "Dance Of The Copper Trail", and that they have included a purely instrumental track, "Don’t Let The Clouds Roll In". If ever there was a piece of music that said ‘life may keep trying to get you down, but you can rise above it’ then this is it.

Similarly "Out Of The Fire", which includes the lyrics, 'I'm leaving this town, with my love, in tears, on the ground' could have been a sad song, but again, it is very positive. It is a song about taking charge of your own destiny. The song isn't about leaving a lover but is about a period in Angela's life when she became disillusioned with the music industry and gave up playing the guitar. So glad that she returned.

There’s a wide variety of different genres hinted at on this album. "Capercaillie" breaks into a blue-grass feel, the instrumental break in "My Sweet Guitar" has a Django-Reinhardt feel to it, and of course, "This Train" has a gospel feel to it. I don’t think I could possibly say which track was my favourite. They are all superb.

So having improved on perfection twice, what hope is there now for their next album? I have every faith that Oka Vanga will rise to the challenge and will continue to raise the bar. My favourite Oka Vanga tune, "Wildflower", which was written for their daughter Daisy, has not yet been recorded, so there’s good reason to assume that their next release will be even more stunning.

She Moves Through The Fair