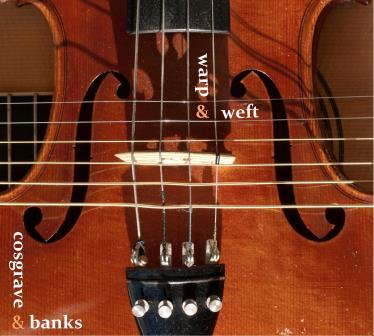 
Strange how things work. A month ago I had never heard of Mike Cosgrave. I went to see Jennifer Crook playing at Twickfolk, and he was on stage with her, playing accordion and guitar and provided backing vocals. I rapidly realised that he was a remarkably talented musician and was someone I should look out for. Flicking through the list of new CD releases for Fatea I saw that there was an album called "Warp And Weft" by a duo called Cosgrave and Banks, but didn't make the connection, until I hunted through youtube. Even then it didn't really register. My first thought was - that guy looks like the bloke who played with Jennifer Crook, strange that he plays an accordion as well, even stranger he has the same surname - wonder if he's related?

Of course, I kicked myself when the penny dropped.

When describing two or more musicians playing a tune between them I have often used the metaphor of them taking the musical "threads" and "weaving" them together, so I love the title of this new release by Mike Cosgrave and Steve Banks - "Warp & Weft". The warp and the weft are the names given to the horizontal and vertical threads used during weaving, so the title perfectly sums up this album - two incredible musicians, weaving threads of music together to create material that is greater than the sum of its parts.

And if the title isn't sufficient to convince you, the cover art continues the metaphor even further. It is a photograph of an acoustic guitar, with a violin positioned orthoganally across it, with the guitar strings threaded through the violin strings to highlight the way they have combined their musical talents. They have woven their musical talents, the musical threads, and indeed their very instruments. Not often the task of reviewing an album is so deftly performed by the artists themselves via their album title and their cover art.

Steve Banks and Mike Cosgrave both come from Devon but they have selected material from around the world to showcase their abilities. The majority of the material is from Europe but they have taken one song from Canada, one from the States and one from Russia. The majority of the tunes are instrumental, indeed it isn't until two minutes into the fourth track before there are any vocals. It came as quite a shock when they started to sing, as by then one is attuned to the thought that this is a purely instrumental album. The derth of singing is quite a shame because they both have lovely soft, but deep voices, and they harmonise together well. The third, of the three tracks with vocals, "Into The Day", written by Steve, reminds me very much of the soft understated David Gilmour vocals on Pink Floyd records prior to Dark Side Of The Moon.

Because of the range of sources from round the world, and because of the range of instruments they play, (Mike playing guitar, accordion, bass and vocals, and Steve playing violin, Hardangle fiddle, viola, vocals, guitar and something called a darabouka) this album has considerable diversity. In fact not only is there diversity between tracks, there is often a wide range within a track. Although there are ten tracks on the album, many of the tracks comprise more than one tune. For instance, "Moscow", the first track, starts off with all the pomp and majesty of a Hollywood epic soundtrack along the lines of Doctor Zhivago, but switches to something sounding more along the lines of a gypsy encampment, with lightly veiled maidens dancing round the flickering light of a camp fire. The track "Waltzes" comprises three tunes, described as a traditional French waltz, a contemporary Breton waltz, and a waltz written in Devon - to me, none of these tunes actually sounds like the traditional waltz I'm used to - all three tunes has more notes to the bar than I would have expected.

Clearly, my understanding of what exactly is the definition of a waltz is lacking. It is not often one encounters an album that challenges ones musical knowledge and inspires research into usical theory.

As well as Steve's "Into The Day", there is one track written by Mike, which is actually two tunes, "Ducks On Ice" and "The Wrong Glasses". Think I'd like to hear more original material from them both, as their original tracks are very promising. I'm sure that anyone who can write this well will have written more than just one song, so hopefully they will have plenty of material for another album soon.

Think my favorourite track on the album is "Herr Roloff's Farewell". As is customary with this album, this again is constructed from three separate tunes, this time originating not from Germany as the name might suggest but from Scotland. It is an amalgam of James Scott Skinner's "Herr Roloff's Farewell", Angus Mackay's "The Duke Of Roxborough's Farewell to the Blackmount Forest" and a hornpipe also written by Skinner entitled "The Mathematician".

Don't think I have encountered an album before that encompasses so many different musical genres. Steve is apparently 3/16th Scottish, so perhaps it is no surprise that the weaving of the warp and weft between him and Mike results in such a multicoloured tartan.