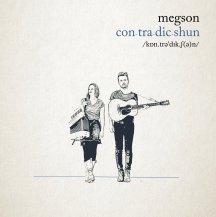 
Although neither member of Megson look much older than sixteen, they have been performing together now for sixteen years, and are showing no sign of losing their edge. "Con-tra-dic-shun" is every bit as brilliant as everything else they have produced.

The inspiration behind "Con-tra-dic-shun" was an 1870 book entitled "Tyneside Songs, Ballads and Drolleries", written by Joe Wilson, who, like Stuart and Debbie Hanna was a singer from the North East of England. Their last album was released back in 2016, and they began writing and collecting for this new album 2 years ago. Wilson's song "Contradicshun" gave them the idea to make an album of songs about contradiction or conversations. In reality, the subject matter of the ten songs cover a much wider range than that.

Although Stu and Debs, better known as Megson, now live in Cambridgeshire, where they have their own recording studio, their Teeside roots still shine through their songs. Five of the songs on this album are their own compositions, and five are from lyrics that they collected which they have written their own music to. As well as "Tyneside Songs, Ballads and Drolleries", they have drawn from an 1812 publication by John Bell called "Rhymes Of The Northern Bards", an 1899 publication by John Stokoe entitled "Songs And Ballads Of Northern England" and an 1882 publication by Bruce an Stokoe entitled "Northumbrian Minstrelsy". They seem to have researched quite deeply for this project.

"Are You Sitting Comfortably?", the first of their own compositions, takes its name from "Listen With Mother", a radio series for children on what was then The Light Programme, (now BBC Radio 2). Every programme began with, 'Are you sitting comfortably? Then I'll begin.' This is a song about the futility of thinking that your work is finished. Like painting the Forth Bridge, there is always something else to do. Having alerted the listener to the fact that they have work outstanding and stressing them over all the urgent tasks that they have forgotten, they ask us 'Are you sitting comfortably? Well if you are then we can begin.'

The title track postulates how happy a place the world might be if we could all just learn to agree with eachother and avoid contradictions. I adore the way they sing this, the way that the vocal line switches back and forth between them. 'Think well befor you start to chide, For contradicshun's nowt but pride!'

"The New Girl" is another of their own compositions, and is very profound. It is about migration and social engineering: the building of new towns at the expense of the old, and is about their home town of Teeside. Back in 1830, the population of that area was around 25, but with the advent of the railway and of the need to transport coal, there was a need to build a town to support the industry, hence the creation of Teeside with around 5,000 homes. There is clearly a parallel here between the migrants of the nineteenth century and those of today.

At first listen it is almost impossible to believe that "Voice Of The Nation" is not a modern piece, but was actually written in 1810. The name of the lyricist is not recorded, the original title being "Song by J.C." The song is a bitter damnation of Parliament: 'In every debate concerning the state these relics of representation, Majorities gain and boldly maintain that their will is the voice of the nation.' Wow. So relevant to today. The majority of the words are multisyllabic and complex, the rhyming clever and surprising.

"I Drew My Ship Into The Harbour" is another traditional song, about a sailor returning home from sea to visit his true love. The song doesn't record how long he has been away, but one assumed that they have been parted for years and have been waiting expectantly to meet again all that time. He returns in the middle of the night and taps at her window. In the short while it took his love to wake up, get up and get downstairs, he manages to lose interest and wanders off.

Stu and Debs have combined two songs into one to create "Toast: Jackey & Jenny": a traditional drinking song with a song written by James Rewcastle, who was the first secretary of the Newcastle temperance movement - talk about contradiction! The resultant combination neatly emphasises how ludicrous it is to toast the health of someone with an addictive poison.

Debs and Stu are almost certainly too young to remember the film "Gigi", as are probably most of my readers. There is a duet in that, sung by Maurice Chevalier and Hermione Gingold, called "I Remember It Well". Their song, "Two Sides In Every Conversation", is on very similar lines. Stu recalls a series of events from the past (how they met, how they got married and the birth of their daughter) but none of his memories coincide with hers, and so each statement is corrected by Debs. Very funny, laugh out loud lyrics, expertly performed with perfect comic timing so that the twists in the narrative are constantly surprising.

Apparently "The Keach In The Creel" is a Child ballad. Definitely not one I'd heard before, and difficult lyrics to understand, unless you come from the North East. A creel is the Geordie word for a large basket, (probably a fishing basket of some sort I'd guess), and keach is the Geordie word for a catch, as in a fishing haul. A really peculiar story about a guy who meets a girl, and promises to call round to her house that night. She tells him that won't be possible, as her parents lock the house up at night. He therfore gets a friend with a ladder, a rope and a large basket to climb up on their roof and lower him down the chimney into her bedroom, so that he can have his way with her. The mother hears the noise, wakes up the father and sends him into the daughter's bedroom to investigate. The girl hides the lover and pursuades the father that the commotion was simply her saying her prayers. The mother doesn't believe the story, and goes to check herself, but trips and falls into the basket. The friend on the roof feels the rope go taut, and starts to pull the mother up the chimney. Turns out the father had realised what was going on, and is pleased that his wife has been dragged out of the way, so that now his daughter can be molested in peace. Obviously simpler times back then!

I was delighted to discover that there is a place called Barrington, and delighted to discover that they actually do have a judo club in Barrington, but sadly it is in Illinois, not the UK, and sadly the story in their composition "Barrington Judo Club" is a work of fiction. The story is so perfect, you feel it had to be true. For reasons unclear, Barrington Judo Club offended the local Rotary Club who put pressure on the council to close them down. No longer able to use the local village hall, they are unable to practice but enter a regional competition, which they happen to win. The prize money allows them to buy the village hall from the austerity driven cash strapped council. Not quite a contradiction but just deserts to the Rotary Club.

My favourite track is left till last. Some of Megson's songs cut deep and can make you cry, whereas some are really hilarious. The humour comes so fast on "A Week Away In The Caravan" that you don't have time to finish one laugh before the next one hits you. It is all about how wonderful it is to be on holiday in a caravan, contradicted by how miserable a holiday in a caravan is. As they own a caravan there could be a degree of autobiography here.

Stu is a bit of a contradiction himself. He started out as a punk, and is now a multi-instrumentalist (playing mandola, mandolin, banjo, violin and guitars on this album) and is one of the most respected record producers on the folk scene. Debbie is a classically trained vocalist and an accordion player. Together they are phenomenal. "Con-tra-dic-shun" is their ninth studio album, and is a triumph. They are currently on tour, and I am really pleased to find that they are coming to a venue near me. I can't wait.