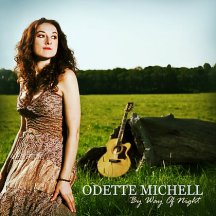 
I'd been driving around for a few days with a Sandy Denny CD blaring from the car stereo. Replaced it with Odette's EP and my first reaction when I started listening was, "Whoops! I've put the Sandy Denny CD back in by mistake". That tells you everything you need to know about Odette.

I've been lucky enough to see Odette live twice now, and both times she played "After The Hurricane". Hearing the studio version on CD for the first time it felt as if I'd known this track for most of my life. Just two listens and the song was part of my make up just like any Sandy Denny song.

And clearly the other reason why I thought I was listening to Sandy Denny was Odette's voice. Presumably I'm not the first person who has drawn the comparison, as the EP contains a cover of "Who Knows Where The Time Goes?". And she sings it just like Sandy.

There are a couple of themes that are woven through the tracks on this EP, one of them being a hurricane. A hurricane is a force of nature that blows through your life causing destruction and then leaves as suddenly as it came. Clearly a synonym for a relationship. The "Hurricane" that appears in both the first and last track, I presume is an ex boyfriend.

"After The Hurricane" involves a type of time travel, i.e. reliving an event in the past, but imagining it playing out differently. The event being a walk along lover's lane, originally solo and unloved, but in a relationship during the replay. Alex Tinlin accompanies her throughout this EP, playing a variety of instruments including percussion, bass, viola and keyboards, and she is also joined on this track by Rolf Tinlin on mandolin and by Katy Schurr on accordion.

Several musicians have written songs called "Mockingbird" including artists as diverse as Barclay James Harvest, Eminen and Tom Waits. You can now add Odette Michell to the list. Odette's song covers another of the themes that are prevalent on this EP, solitude versus company. There are a few different species of birds known as mockingbirds, not because they mock or taunt you, but because they are mimics and capable of reproducing sounds that they have heard. Odette's mockingbird reproduces conversations heard elsewhere and relays them to her to break her solitude. I suspect that the mockingbird is a metaphor for a television or a radio. Alex and Odette are joined on this track by Annelise White on cello.

Younger readers may not remember Woolworths, but back in the mid 1970's I once bought a vinyl album there, called "All Our Own Work" by Sandy Denny and the Strawbs, for the princely sum of 50p! The album contained the first recording of "Who Knows Where The Time Goes?" Sandy left the Strawbs and joined Fairport Convention even before the album had been released, but I have loved her, and the Strawbs ever since then. Always nervous to hear someone sing one of Sandy's songs, because Sandy set the bar so high. Most voices can't match hers, but I think Odette has pretty much nailed it. Harry Phillips adds a beautiful slide guitar accompaniment which adds to the feeling of solitude when watching your friends leaving from a cold, deserted shore.

There's a slightly Caribbean feel to "Silver Moon" due to more gorgeous slide guitar from Harry Phillips. Listening to it, I can really imagine that it is me laying on a beach by a camp fire, listening to a troubadour playing and watching the night sky. Not something I've ever done, but this haunting song almost creates memories of having done it.

Much as I like the first four tracks on this album, my runaway favourite is "The Things We Cannot Say". I would describe this as a perfectly crafted song. The viola break between the verses is so in keeping with the mood of the song, it kind of feels organic. The 'hurricane' re-appears in this song, causing clothing to be scattered from the washing line. There is also mention of familiar fingers knocking on the door late at night, so I presume that the hurricane is an ex-lover who returned.

'And what are the things we cannot say?' you may ask. Odette doesn't say, but whatever they are, they can only be whispered just as dawn is breaking.

The night, and the night sky seem to also be recurring themes through these tracks, hence, I assume, the name of the EP. I think, if my name was Odette, I might have been tempted to call my first EP either "A Space Oddette-y" or "The Odette-a File". Probably just as well that I'm not a musician.

As a debut release, this EP is stunning. Well worth it just for the last track alone.