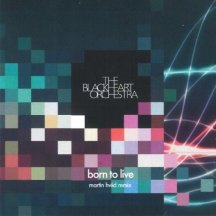 
Chrissy Mostyn and Rick Pilkington are the musical equivalent of Doctor Who’s TARDIS. From the outside, the TARDIS is only the size of a police telephone box, but inside it is vast. From the outside, Chrissy and Rick are just a duo, but their musical sound is also vast. So much so that they recently rebranded and changed their name from Blackheart to The Blackheart Orchestra.

Yes, in a recording studio, any multi-instrumentalist can record track after track and then edit it together to sound like an orchestra, but these guys are so good that they can sound like a full orchestra when playing live.

Their songs are all completely stand-alone masterpieces, but when combined on one album you notice that there are various themes, and metaphors that flow from one song to another to tell a story, such that the album is greater than the sum of its parts. I’ve recently realised that the same imagery crops up across different albums, so their works are often linked by threads in several dimensions, though the metaphors may take on alternate meanings as they pass from one album to another.

“Born To Live” is the third single that they have released from their recent album “Diving For Roses”, after “Keep The Light In” and “Sebastian”. This single is described as a Martin Hviid remix, but it is almost entirely a re-score rather than a remix. The album version comprises a piano, with the notes pouring down like rain, with what feels like an orchestra of timpani crashing over you like thunder. Have to admit I adore the original version, so was a bit nervous that a remix might ruin it.

Martin Hviid is a Danish record producer and composer, and has done a fantastic job with this track. The piano is replaced by the sound of cellos and the thunderous timpani are replaced by a gentler, almost reggae rhythm, but it still retains the despair at the thought of a relationship failing and the potential joy if it could be saved.

“Born To Live” starts with the line – ‘I am a shooting star, but this time I’ve gone too far’ – I believe a metaphor for one’s emotions soaring high up in the stratosphere, and then crashing to the ground in despair. The imagery harps back to the track “Round And Round And Round” from their third album, “Songs from a Satellite” in which Chrissy sings ‘All the stars keep falling to the ground, funny how they never make a sound.’

The second verse begins with the line, ‘I am the evening sky, for I never chase the light.’ The analogy here, I assume, is that the evening sky grows ever darker, like one’s mood if suffering from depression. There are elements of being bipolar here, from flying like a shooting star to ever deepening gloom. Again, the metaphor between the sky and emotions is one that Chrissy and Rick have used before on their song “The Sky and I”, though it was a different aspect of the sky that they drew parallels with there - the sky’s ability to rain, like tears.

The chorus urges us to ‘fly like birds and live our dreams’. As before, the metaphor of flying is one that they’ve used before, for example on their second album “Invisible” on the track “Flyaway”, although on that heart-breaking song, the act of flying represented one’s soul departing.

There are two tracks on the CD: the full version of “Born To Live” and a cut down version designed for radio airplay. Definitely deserves a lot of that.

The more I listen to Blackheart or The Blackheart Orchestra the more I realise how deep and profound their material is, and just how many layers of connections there are between their songs. Like the TARDIS, there are more than three dimensions with this Orchestra.

But to appreciate their music you don’t need to be aware of any deeper intricacies. Just treat each song as a stand-alone item and enjoy it as.