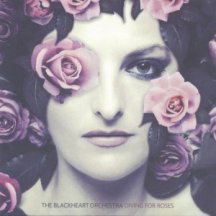 
I've always thought it really sad that Peter Gabriel and Kate Bush only collaborated a couple of times, resulting in just one single, "Don't Give Up", and a duet on Kate's 1979 Christmas TV special of Roy Harper's "Another Day". I suspect that the latter is the youtube video I have viewed most often. If, like me, you haven't 'given up' on the possibility of a re-union, then "Diving For Roses" might be just what you need to tide you over till Peter and Kate do finally release an album. No. Scratch that. "Diving For Roses" is better than a temporary stop gap. I am a huge fan of Kate Bush and Peter Gabriel, but I don't believe either of them have ever made an album as perfect as this.

Chrissy Mostyn's voice has been compared with Kate's, but listening to this album, I think I would rate Chrissy higher.

I've been lucky enough to see Manchester based duo, Chrissy Mostyn and Richard Pilkington twice; once supporting Strawbs and once supporting Renaissance. They recently played a gig in Farncombe quite near to me and I was very much looking forward to seeing them again, but managed to catch flu, so fingers crossed they come back this way again.

When I saw them before, they were known as Blackheart, but they have become so adept at such a wide variety of instruments, and with clever use of sustain and tape loops, they can sound like a full orchestra rather than a duo, so they have rebranded, and are now known as The Blackheart Orchestra. Sadly, there used to be a punk band, now defunct, known as "The Black Heart Orchestra", and most internet search engines can't distinguish between Blackheart and Black Heart, so if you are searching for them, and find a group playing punk rock, then keep searching.

Yes, it is quite possible for a duo to sound like a full orchestra on a studio album with dubs, over dubs, re-dubs and a skilful mixing engineer, but believe me, these two sound just like this live. They really are amazing.

"Diving For Roses" was crowd funded by Pledge Music; a campaign that reached 40% of it's target within 24 hours. I, like many others, have pre-ordered a copy, but am really lucky as I now have a review copy as well. I love this album so much that I am liable to have worn out the review copy before the official release.

Having rebranded, and added "orchestra" to their name, there must have been a temptation to make "Diving For Roses" as full a sound as possible, but they haven't fallen in to that trap. The songs cover everything from a capella, via gentle piano accompaniment to full crescendo. Chrissy's voice is beautiful, but so are the instrumental breaks as well. There's a gorgeous instrumental break in "Right By Your Side" with the lead instrument being the bass guitar, swiftly followed by an extremely intricate and complex opening for the track "Hypnotize".

The title of the album sounds quite cryptic, which is very appropriate as the twelve tracks on the album are all quite cryptic. The music is complex and so are the lyrics, which mean that everytime you listen to this album you'll discover more. I know that my interpretation of a song is unlikely to be the same as that of the writers, but I don't think I'm too far off. I believe that the songs tell a love story, as seen through the eyes of somebody who is paranoid about having their heart broken and the fear is driving away the partner, resulting in a self-fulfilling prophesy. The songs examine this concept by comparing diametric opposites such as light and dark, togetherness and separation, silence and noise and living and dying. In the first track, "Sebastian", Chrissy sings: '"For you I'd die", and you just might kill me more. Then your hands tell me "Go", and my eyes start to close, and your breath whispers "Yes" and my heart tells me "No"'. The themes of contradiction, breathing and death run heavily through all the tracks.

But there is more than that. Between the polar opposites there are different shades. Between light and dark there is starlight, twilight and firelight. Between silence and thunder there are symphonies and sirens. You can feel separated even when you are right by each other's side, and can feel togetherness even on different continents when you realise that the same sunlight is falling on you. Between life and death there are other states like sleeping, hypnotic trances and ghosts. Love takes our breath away, but is the reason we breathe. We are our lover's oxygen, but also their belladonna (deadly nightshade).

The tracks on this album are all so brilliant that it is very hard to pick a favourite, but I think I'd have to go for "Hypnotize", if pushed. Apart from the instrumental opening, the latter part of the song takes the love affair to the point at which they are making love on the floor by firelight, (something else that could put oxygen in your lungs or take your breath away). Chrissy sings it in stacato bursts, and rather than holding a note, she adds syllables, so that "ghost" is sung as "gho-oh-ost", and at one point she sings "eyes" with something like fifteen syllables. Gorgeously erotic - makes "Je T'aime" sound like a quick fumble behind the bicycle rack.

Keep The Light In