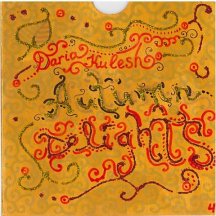 
First the good news – Daria has released another EP, and, as I’m sure you won’t be surprised if you know her, this one is every bit as good as the others in the series.

Secondly, the bad news. This is the last of the seasonal “Delight” Eps that she has been producing. I must say I have really been looking forward to their arrival and will really miss them.

But then the really good news. She has released her “Winter Delights”, “Spring Delights”, Summer Delights” and now “Autumn Delights” EPs to fund her next album release, “Earthly Delights”. So although there are no more EPs to look forward to, there’s as even bigger delight in store.

The thing that is most noticeable about “Autumn Delights” is the imagery that each song generates. Yes, it is just an audio sound track, but each song spawns a video playing in my head, just as if this was a DVD.

For example, scene one, sorry, not scene one, track one. Track one was written by Daria and Kate’s former band member Ben Honey, and the original appeared on Kara’s first album “Water’s So Wide”. Ben’s in laws lived on the Isle Of Wight and for some reason I got the idea in my head that “Union Street” was the name of a road on the island. When Daria sings “Union Street” I can see the road clearly in my head, perhaps clearer than the mundane reality around me – yes – probably a good idea I stop listening to it whilst I’m driving! I can see the road weaving down a hill from a small farm at the top to a quiet fishing village at the bottom.

Quite disappointed to discover that there are two Union Streets on the IoW, neither fit the bill as described. It matters not. Union Street is real to me.

This is the first track on Daria’s series of EPs to feature the wonderful Kate Rouse and the first to feature all of the Daria Kulesh Quartet, so gives a wonderful taster for how her next album, “Earthly Delights” will sound. Most stunning is how Marina Osman’s keyboards and Kate’s hammered dulcimer fit together so well, and love the way Kate rings out the church bells on her dulcimer at the end.

Scene two on the EP is another of Daria’s collaborations with concert pianist Marina Osman, and, like many of their collaborations is in Russian. “Boston Waltz” was written by Alexander Rosenbaum, a Russian bard and politician. In the days before the collapse of the Soviet Union, many musicians were forced underground, but somehow Rosenbaum remained popular, so apparently, he is often shunned by many other Russian bards. His popularity with the people though has remained and in 2001 Putin awarded him the title of People’s Artist of Russia.

Although the song is about a ballerina waltzing through the Autumn leaves, as the lyrics are in Russian, the image I see when I hear Daria sing this is not related to the song at all, but to the fact that I know that Daria used to have a residency in a folk club in an Irish bar in Moscow near the Kremlin. I can’t hear ”Boston Waltz” without seeing a mock Tudor pub in the shadow of the Kremlin, with Daria and Marina, dressed in fur, playing in front of a khaki clad army drinking pints of ‘???????’, as KGB spies sneak in via secret passages. I might have watched too many Bond movies, but if the producers of the next Bond film are looking for someone to sing the theme tune, or to play a Bond girl, they needd look no further than Daria.

Scene three takes place somewhere in Northern France or Belgium. The sky is a perfect azure blue and there is a low brick wall in front of a field of row after row of pristine white crosses, arranged in an almost crystalline regularity. Daria, in a long white dress and a woven straw sun hat has stopped by one of the graves for a picnic. She glances down to read that the grave is of a nineteen year old soldier, Willie McBride.

I’m a little shocked as apparently audiences have been nagging her to record her version of Eric Bogle’s “No Man’s Land” for years, and so far, I haven’t ever heard her play it live yet. Clearly I need to get to more Daria gigs than I currently do!

Strangely, the first time I saw Daria and Kate was at Twickfolk when Peggy Seeger challenged Folk clubs up and down the country to perform Pete Seeger’s “Where Have All The Flower’s Gone” for Armistice Pals in aid of the charities British Red Cross, the Malala Fund, the Tim Parry/Jonathan Ball Foundation for Peace, and Peace Through Folk. Although Daria didn’t sing “No Man’s Land” there at the time, the song was sung, I believe by Emma Scarr (from the duo Black Scarr). Perhaps that was the moment that Daria decided to add the song to her repertoire.

Her version is extraordinarily touching. You can really feel how deeply she feels for the poor soldiers who’s lives were so cruelly taken, over a cause they didn’t understand.

Finally, scene four takes place in a Parisienne night club, probably around Montmartre. The hour is indeterminate, long after the glitter and excitement of midnight, but long before the rosy light of dawn begins to waken the city. The audience, mainly artists, are too tired to stagger back up the hill to their rented studios, and so sip nonchalantly at half empty glasses of absinthe.

If, when you listen to “Les Feuilles Mortes” (Autumn Leaves), you do not visualise Daria and Jonny Dyer arriving on stage in the night club, then I suspect you have no soul. Daria is wearing a long black dress, split to the thigh and is holding a long cigarette holder from which a stream of blue smoke drifts up from a Gitanes.

So that’s it. Sadly no more EPs from Daria to look forward to. Luckily all four of them have been stunning. They might not summon virtual reality images in to your imagination like they do me, but these songs are ones I will be listening to for many years to come.