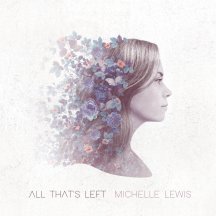 
Rare to have to start a review with an apology. Even rarer to have to apologise to an entire Nation. Michelle Lewis's new album "All That's Left" isn't due for release till October the 18th, but she is currently touring to promote it. Her tour started in the UK and included five dates, and she came armed with advanced copies. However, at the start of the final gig in the UK, at Twickenham, she had just seven copies left, of which I grabbed the first of those. She went down a storm, and so I very much doubt if there were any copies left at all. As she was moving on to the Netherlands the very next day, it meant she would not have any new albums to sell. So I am very, very sorry to everyone in Holland. You will just have to wait till October to get a copy. And it's all my fault, 'cos I managed to get one of the last ones.

So I can think of no better way of reviewing the album than by saying I have never heard of an album that sells out of its first pressing before it is released. (Sorry, showing my age - think it was vinyl that was pressed - guess CDs are printed). Anyway, the fact that this album sold out after five gigs just shows that I'm not the only person who really likes it.

The first thing I noticed about this album is that Michelle's voice is extremely similar to Maz O'Connor's. And yes - That's a good thing - I really rate Maz and believe that she well deserves her title as the UK's answer to Joan Baez. Strangely on hearing Michelle playing live I didn't notice the resemblance, but on record the similarity is uncanny. Quite how someone from Boston in the US and someone from Barrow in the UK can sound identical I'm not certain. I suspect witchcraft.

In researching Michelle in order to write this review I did get slightly confused. The trouble is, there is another American singer/ songwriter called Michelle Lewis. The other is older and possibly more famous having written songs for Cher, Little Mix and Disney. I was looking at the internet wondering how on earth Michelle could have written the sound track to the 1994 film "Practical Magic" as I'm sure she would have been at school back then.

My Michelle Lewis released her first album, "This Time Around" back in 2004, and "All That's Left" will be her third album.

There's a delightful irony in the fact that the first track on the album, "That's What They Say" is a protest against people who offer advice such as 'Pull yourself together. Buck up. It'll all work out well' when you are having a bad time and know that thing's won't get better, and the third track, "Push On", is advice she is giving herself to anyone struggling to cope with life. Afraid I am adicted to "Push On". It's an ear-worm, but one that I'm really glad to have playing round my head. She's made a beautiful video cartoon for the track of a young girl towing a whale through the desert to emphasise what you can achieve with perseverance.

Her website states: 'Many performers live for applause. Michelle Lewis just wants to make you cry.' Several of the songs on this album really are rather sad. The title track, "All That's Left", "Scars" and, I believe, "Please Don't Go" were all inspired by the recent passing of Michelle's Grandmother. They aren't just filled with sorrow at her loss, or of joy celebrating her life, but also guilt at things Michelle didn't ever get to say or do.

Although there are ten songs, the album is quite short, as only three of the tracks exceed four minutes in length. I think there would easily have been room for another couple of tracks, but Michelle has strived for quality if not quantity.

There is one cover on the album, and it is quite impressive. I'm not generally a big fan of Bruce Springsteen, not that I've ever disliked anything he's ever done. "Dancing In The Dark" is probably the only song of his that I could name. Michelle's soft, gentle version shows that it really is a beautiful song. The sleeve notes show that Springsteen too likes her version of his song. Amongst the list of people she thanks on the cover she includes him for 'nurturing, caring for and loving my songs as much as I do. You're family now.'

Michelle, can I just say - I love your music too, but I'll forgive you if I don't get a credit on your next album.