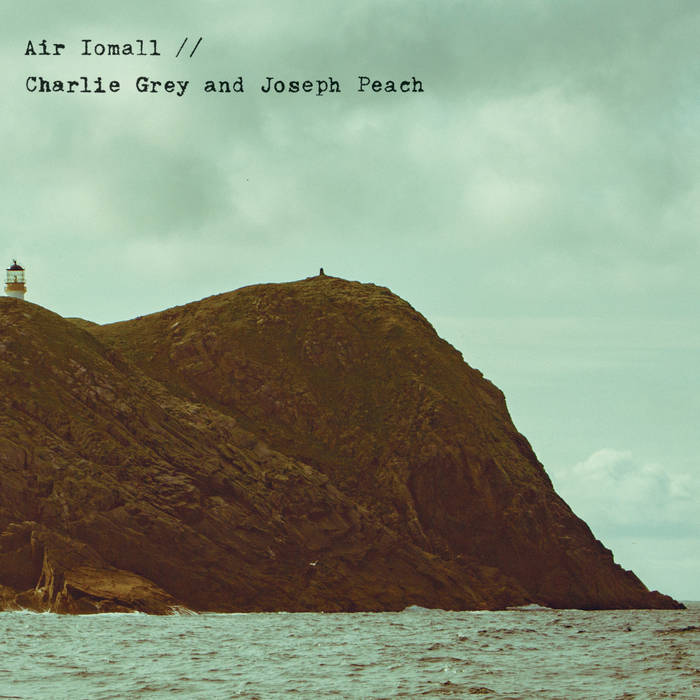 
Scottish duo Charlie Grey (violin) and Jospeh Peach (accodion, harmonium and dulcitone) were BBC Radio 2 Young Folk Award finalists, and are also members of The Iona Fyfe Band, Westward the Light and Tannara. Their first album, "Waves Rise From Quiet Water" was awarded Instrumental album of the year, by Fatea.

For "Air Iomall", their second album, for inspiration they travelled on a Dutch tall ship called Wylde Swan, visiting some of the most remote uninhabited Scottish Isles. The trip was documented by filmmaker Hamish MacLeod, who is releasing a film with the same name - "Air Iomall". Air Iomall, in case you don't speak Gaelic, means 'on the edge'. The project was sponsored by Creative Scotland and by Help Musicians UK.

Not being a songwriter, I'm perhaps not qualified to comment, but I can't help feel that if I was looking for ways to write music inspired by a tall ship I'd have dived into re-runs of 'The Onedin Line' on youtube, or if I was looking for inspiration for remote Scottish Isles, a couple of back issues of 'National Geographic' might have been easier. Perhaps Charlie and Joseph's greatest achievement for the Air Iomall project was to blag Creative Scotland and Help Musicians UK into paying for their holiday.

Having said that, though, the resultant music that they have produced is gloriously atmospheric, and if you close your eyes you can see the islands appearing out of the mist, or a tall ship, in full sail speeding through the water. It just goes to show that Charlie and Joseph were probably right and seeing things in person really is a better muse.

The format of the album is a little unusual, comprising six original instrumental tracks recorded in a studio, with a seventh track being an eighteen minute live performance of five of the tracks, played at a concert they gave during their voyage on the archipelego of St Kilda, the concert being timed to coincide with the 88th anniversary of the evacuation of the native population.

St Kilda is a remote part of the United Kingdom, being a 66km journey across the open Atlantic Ocean from the Outer Hebrides to reach it. To prevent rats from gaining a foothold on the group of islands and devastating the bird population, cabin boats are not allowed to moor there, so you can only put ashore by transfer using inflatable dinghies. Having travelled so far across the Ocean to hear a concert, I would have expected it to have lasted for more than just eighteen minutes, so I am a bit surprised that they didn't play for longer, and just make this a live album. Perhaps trips to the islands are restricted to very short visits due to the tide, or due to the length of the return journey.

The songs played during the live section of the album are presented without any spoken introductions. Possibly the songs were introduced but the speech was edited from the recording and you'd need to watch the film to hear what was said. I think it would be nice if they had given a few details as to what the inspirations were behind the music. I think the following might cover some of it.

The opening track "The Big Islands", marks the start of their voyage to The Shiant Isles. Shiant comes from the Gaelic 'Seunta', meaning Holy, or Enchanted. They are also sometimes called Na h-Eileanan Mòra, which translates, as "The Big Islands". After a four year eradication programme, the Isles were officially declared 'rat free' last year.

The second track is called "Donald MacLeod, King of North Rona". There are two islands off the Scottish coast called Rona, one near Skye in the Inner Hebrides is referred to as South Rona. The other Rona, referred to as North Rona, is the most isolated part of the British Isles ever to have been inhabited. The last family to inhabit the islands was that of a shepherd, Donald MacLeod, who was referred to as the 'King of North Rona'. I am intrigued as to whether Hamish MacLeod is a relative, and whether the song was written because of the similarity in the names.

The rocky skerry "Sula Sgeir" inspired another track on the album and is even more remote than Rona. It is famous for its colony of gannets and for its lighthouse which is frequently damaged by the storms that crash over it. The name derives from the Old Norse and means gannet skerry.

The title "Ducat, Marshall and the Occassional" might look to the uninitiated as if it could be a printing error, or as if there's a word missing from the title, but the title is very much correct and complete. The Flannan Isles, are a group of uninhabited islands in the Outer Hebrides, and are, I believe, the group of Islands shown on the cover of Ait Iomall. In December 1900 a passing ship reported that the lighthouse was not operational. Due to bad weather, a search party didn't arrive until almost a fortnight later, to find no trace whatsover of the lighthouse crew. The telegram sent back read: 'A dreadful accident has happened at the Flannans. The three keepers, Ducat, Marshall and the Occasional have disappeared from the Island.'

Beautiful and evocative music, but I do feel that it could have been an even better album if there were more new tunes, presented entirely as a studio album, or entirely as a live album from a much longer concert. Still well worth owning though, especially if, like me, this will be the closest I get to these far flung islands on the edge.