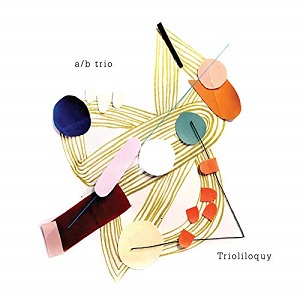 
Trioliloquy is one of a recent batch of releases on the excellent Canadian label Chronograph. It is the latest release by one of my favourite live jazz groups, A/B Trio. I covered the band for Fatea in a live Review in August 2017, and finally have their latest album to hand. It contains eight tracks - 4 of them mentioned in that Review.

First, a bit about the band: Dan Davis (saxophones, flute), Thom Bennett (percussion) and Josh McHan (double bass) form the trio, and all live in Alberta, Canada. Though the mostly perform as a trio, they tend to collaborate with other players on their albums; on Trioliloquy they are joined on five tracks by Toronto- based trumpeter Kevin Turcotte (his credits include Barenaked Ladies and Bruce Cockburn).

To me, the appeal of A/B Trio is their combination of breadth of style and impeccable musicianship. This should be no surprise, as they are all highly-trained players (Davis and McHan also play in classical contexts), composers, teachers, and Bennett is a recording engineer and producer. All are in-demand sidemen in a variety of other Canadian groups, across the range of genres. Stylistically, their trio work ranges from interpretations of standards and bebop tunes, through hard bop and latin jazz, to contemporary 'chordless' jazz. All the tunes on the album are self-composed.

The album opens with Lenny's Beat, an up-tempo hard bop theme which provides plenty of space for open improvisation. Strong solos from Turcotte and Davis are underpinned by a solid pulse from McHan and typically propulsive drumming by Bennett. Turcotte also features on How Suite It Is, a swinging blues tribute to the Yardbird Suite in Edmonton, where they regularly play. The tune appears to be a contrafract, based on the melody and chords of "Sunny" by Bobby Hebb. The theme opens up to solos by Turcotte, Davis and McHan, before culminating in some thrilling collective improvisation.

Roundabout -also reviewed live in 2017 - is another hard bop, Blue Note-ish theme used as a jumping-off point for soloing. Davis solos on alto this time, and the tune also features an excellent drum solo from Bennett. The sound quality throughout the album is excellent - a tribute to engineer Paul Johnston - and I particularly like the fact that the percussion sound is not drowned in cymbal 'swish', allowing Bennett's work on snare and toms to shine through.

Title track Trioliloquy is, naturally, a trio track. Much more contemporary in structure, it opens with an almost church-music tone, before picking up tempo into a more free-ranging collective improvisation featuring tenor, bass and drums. This is the sort of challenging, but listenable, style which makes A/B Trio such an entertaining live act. Next is Leda's Song, a bluesy waltz dedicated to Davis's mother, which gives him scope to switch from lyrical to gutsy alto styles; McHan also gets to solo - another excellent example of how a good musician can pack so much emotion and lyrical exploration into a short improvisation.

Los Plazos Del Patron is a bossa nova. Davis's alto has the requisite Stan Getz feel, while Turcotte produces a bright latin feel on trumpet. The two then duet in a more contemporary vein, chasing each other round the notes firstly at a leisurely pace, then gradually building up the tempo and excitement, before slowing back to the theme. Bluesaholic, a trio number, could be a piece of 1960's film music, with a swinging, bass-driven groove - indeed, it gives McHan an opportunity for another Mingus-esque solo. The album closes with Secondary Opinion. This is an up-tempo quartet piece, which could be by the second great Miles Davis quintet sans piano!

Altogether, then, this is a consistently entertaining, varied, well-played and stimulating album, an excellent follow-up to 2017's album Out West. It is highly recommended.

* Chronograph Records is a boutique record label that works closely with artists who are looking for an insightful and collaborative partnership. Representing some of the best jazz, urban acoustic, and blues artists in Western Canada, Chronograph Records strategically helps develop their roster, allowing the artists to evolve into exactly who they're supposed to be.