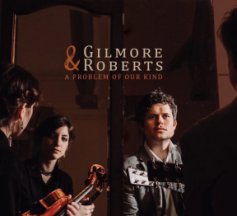 
'We're very excited', said Katriona Gilmore when I saw Gilmore and Roberts perform recently at The Riverhouse Barn in Walton-on-Thames, 'Our new album is due to be released in less than a month. However', (sotto voce), 'we do have some black market copies with us. Obviously you don't say anything to anyone...'. Which leaves me with a bit of a dichotomy.

I've never reviewed an album when the artist has strictly forbidden any mention of it before!

Fortunately, I've seen Gilmore and Roberts several times before and am well aware that Katriona has a wonderful, dry wit, and that her plea for silence was merely humour. On record you don't get to hear any of her live audience banter, such as 'Have you all had a good weekend so far? - oh- that bad, eh!' or 'We don't often bother to tune our instruments - but we heard that you were picky.'

Jamie and Katriona's wit does come across though in their lyrics. There are a couple of lovely gentle word plays on their new album, "A Problem Of Our Kind".

The phrase 'You can take it from me' usually means - you can trust what I'm saying. When said by a philanthropist who, so far, has given away over half a billion pounds to the arts, the phrase would take on a completely different meaning. Jamie's song "The Philantropist (Take It From Me)" was inspired by the life of Laurie Marsh, who, starting from nothing, made a fortune and then found that he didn't like the person who he was becoming. The song is written as if sung by the Philanthropist himself, with 'take it from me' initially being an exhortation of truth, and evolving to mean 'please accept a donation.'

Another of Jamie's compositions "On The Line" was inspired when Jamie was listening to a radio phone in show hosted by Jeremy Vine on Radio 2. The subject of conversation was the delays caused to the trains due to a suicide on the line. Artfully, Jaimie's use of the words 'the line' could mean the railway line or the telephone line that the callers to the show were using. The word 'station' is similarly deliberately ambiguous - the song could refer to the railway station or to the radio station. Jamie also further muddies the water with phrases such as 'It's a fine line' and then using 'on the line' to refer to the future. Absolute mastery of use of language.

The title "Bone Cupboard", written by Katriona, was inspired by a line in a Margery Allingham novel. There is a common metaphor, skeletons in your closet, (meaning past events that you lock away to prevent others from knowing about them), and the bone cupboard is a metaphor for the closet you keep your skeletons in. There's a wonderful bit of subtle word play from Katriona relating to the difference bewteen 'what you keep in your bone cupboard I don't want to know' and 'what I keep in my bone cupboard you don't want to know'. The first is just disinterest - I'm not interested in whatever skeletons you have in your closet. The second is a threat - I'm not telling you what sort of things I've got up to in the past, but if if I find out you've ever lied to me, start running, 'cos whatever it is I've done before, I'll do to you. Such a minor change to the word order and such a dramatic change of meaning.

In 1911 a newspaper editor Tess Flanders first used the expression "Use a picture. It's worth a thousand words.' Jamie was inspired to write, "The Smile And The Fury" from a photograph of a young woman disarming an angry far-right protestor with a smile during an English Defence League rally. Think it is really brave to write a song (with around two hundred words) which includes the line: 'The scene depicts a thousand words of poetry and prose.' Almost as if he was admitting that the song can't live up to the photograph before he started. Jamie definitely does lives up to the challenge, though, producing an absolute master class song writing. For a folk album this is almost a heavy rock song. He fires multi-syllabic words at you like bullets - 'With consummate collection in the midst of confrontation, conviction in the firmness of her stance...'. If this song does not find its way on to the GCSE syllabus in a few years then there's something seriously wrong with education.

You'll have gathered by now, if you didn't already know, that Gilmore and Roberts draw on a wide variety of sources for inspiration. The album opens with their recent single, "Gauntlet" written by Katriona. This was inspired by the events of a court case exactly one hundred years ago, in which the defendant in a murder trial was released because he invoked the ancient law of trial by battle (abolished after this case). (Apparently quite recently someone was fined Ł20 for a parking offence and wrote to the DVLA to say - send me your champion - I'll fight you for it. They were taken to court and fined Ł100!).

Katriona's "All The Way To Rome" was inspired by a couple of characters from the TV series "American Horror Story". Not something I've ever seen, but from the lyrics I'd say that one of the characters is bitterly disappointed with someone that they had hero-worshipped, who was something to do with the Catholic Church, perhaps at a seminary, maybe destined for the Vatican?

Her song "Just A Piece Of Wood" is a love song to someone she has shared the stage with for twenty years - No. Not Jamie, but her violin! Almost everything and anything seems to be suitable inspiration for them to write a song. Don't tell them your life story or you might find yourself the subject of their next album. Absolutely no point me telling them my story, they've already summed me up completely with their song "Average Joe".

The title "A Problem Of Our Kind", comes from the lyrics of "On The Line". They named the album when they realised that most of these songs all relate to the human condition. This album is definitely my contender so far for best album of the year. It has everything you could possibly want in an album. From the the a capella, "Bone Cupboard" to the hard hitting, almost hard rocking, "The Smile And The Fury", to the almost classical guitar instrumental, "From Night To Morn", to the a capella, "Bone Cupboard", to the wonderful two part harmonies, particularly on "Average Joe", to the heart-warming, yet tragic, "Things You Left Behind" written by Katriona to try to come to terms with the death of her Aunt, "A Problem Of Our Kind" is superb.