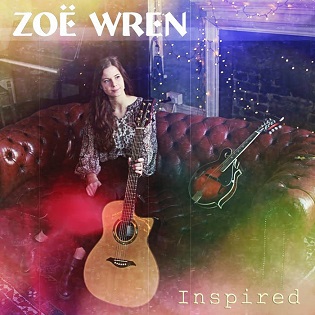 
Beginning as a Camden busker and going onto tread stages from Cambridge Folk Festival to Glasgow's Celtic Connections, Zoe has released a series of perfectly formed Eps and singles. INSPIRATIONS, the latest EP is a, look back at iconic female performers, as the title suggests Zoe's inspirations.

What is immediately apparent, over the shimmering piano and resonant guitar, is that Zoe has a simply stunning voice. Her version of Joni Mitchell's 'Both Sides Now' is confident measured and mature. Likewise her more ornamented, layered take on the traditional 'Let No Man Steal Your Time'. Zoe's version nods to Jacqui McShee's, but her doubling of the voice to create tension, as she does so well on 'Who Knows Where The Time Goes', and the beautifully played guitar are sublime.

Glorious too is Zoe's charged version of Kate Bush's 'Man With The Child In His Eyes'. It's a brave performer who takes on Bush at her own game, voice and piano and Zoe nails it. She even manages to pour a soulful Carole King or Christine McVie measured stately smoothness onto Lady Gaga's 'Joanne', making Gaga's original sound fussy. Zoe's version of Tracy Chapman's 'Talkin' bout a Revolution' doesn't quite have the bite of the original, but is a beautiful and pure version of one of the defining protest songs of the 80's. It does demonstrate her prowess and considerable power and a musician and singer, she just needs televised tribute concert type exposure like Chapman to bring her wider exposure. Across the six track EP, these are lovingly sung and impeccably played covers, showing Zoe Wren's inspirations from the world of classic songs by powerful female performers and writers.