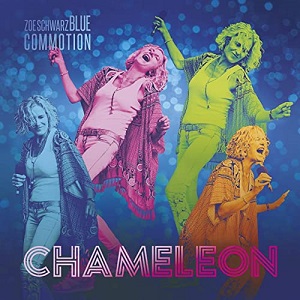 
This is another classy album from the Queen of the Southern Blues, (southern England, that is). Now into their 6th studio album in eight years, the band have really settled into a groove: solid rhythm, tight playing and measured solos. This can be put down to maintaining a consistent line-up and to regular gigging. The result? A set of solid tunes, a range of styles and moods, and a thoroughly enjoyable album!

All 12 tracks have been written by Zoe and Rob Koral, except for "Tell Me", which is by Rob and Sue Hawker. This demonstrates another strength of Blue Commotion - it is hard to think of another blues band that could come up with such a varied bunch of tunes, all of them self-penned. Take the aforementioned "Tell Me", this is a soulful ballad, not really a blues at all, but the smokiness of Zoe's voice and clean lines of Rob's guitar-solo ensure that it fits in perfectly with the other blues songs. Contrast this with the classic 12-bar boogie of "Come and Lay With Me" - all sexy swagger and raunchy solos: Pete Whittaker's Hammond has that perfect mid-sixties organ-trio sound! But the icing on the cake is the mysteriously uncredited version of Billie Holiday's classic "Lover Man" (Jimmy Davis, Roger ("Ram") Ramirez, and James Sherman) which completes this track. Here's a reminder that Ms. Schwartz is also a consummate singer of torch songs and standards! (Check out some of her earlier albums*, if this is your thing).

Other songs show the diversity of Blue Commotion: opener "Life Goes On" is a soul-blues which opens like a Dire Straits tune; "If Only I Could Be With You" has a latin feel to the rhythm; and "I Hope I See The Day" has a Ska beat to it. While it would be difficult to claim that Zoe's lyrics are always deeply meaningful, the latter track does at least include a bit of social comment - and great solos from Rob, and from Pete (on electric piano). Even tastier are the slow tracks, such as "Hello My Old Friend". This opens with a churchy organ theme (Percy Sledge's "When a Man Loves A Woman?) and includes another plea for tolerance and harmony, plus a typically evocative and economical guitar solo from Rob.

I think I find Zoe's slow blues generally more convincing, and better suited to her voice. "Better Days" has that late sixties rock feel, complete with brass section (Ian Ellis on sax. and Patrick Hayes on trombone). Better still is the gentle acoustic soul-ballad "I'll Be Here For You" - with emotive minor key shift, and churchy organ solo. In a similar vein, "Tell Me" treats love and loss with soulful yearning, and comes with another perfectly matching guitar solo from Rob. The strengths of the rhythm section also stand out on the slower tracks - especially the tightness of Paul Robinson's drums and Pete Whittaker's base pedals on tunes such as "When The Blues Come A Knocking", and the loping "I Cry Just To Think Of It".

Overall, then, a totally satisfying album from a band at their peak. My only personal gripe: with a brilliant sax. player like Ian Ellis in the brass section, it's a pity he couldn't have been coaxed to play a solo. I know he does a mean "Lover Man".